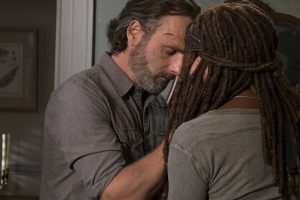 Another solid episode. TWD seems to be going back to its bread and butter by doing a lot more character building and mixing in some action. Everyone is going through ‘The Carl Effect’ – especially Rick. They are struggling with how to move forward and still retain their humanity. The war with The Saviors has come with great cost and everyone is reflecting on how it will end and how much more death will come. A lot of callbacks too as Rick, Carol and Morgan deal with the memories of their lost children. 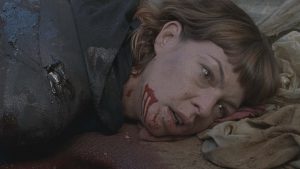 The cold open was a flashback to the massacre at the junkyard. We see Jadis pretend to be deeds her people get wiped out. When it’s all over we see her disrobe from her filthy clothes and find that she was wearing that white slip underneath. We then see her pack her suitcase in what seems to be a designer bunker. A pristine wooden room with a bed and desk. Simple and clean. Did all her people have one of these or just her? We also see Lucille leaning against the wall. She takes Lucille and her suitcase and leaves. We then see that she’s got Negan tied up on a sled. She starts to drag him out into the middle of the junkyard. How did Negan allow himself to be in this position?

Tara did not get sick and suspects it was because Dwight didn’t dip his arrows in walker blood and guts. Daryl is less willing to accept that and just thinks she got lucky. They’re running low on ammo and assume so are The Saviors but Rosita knows they have the ‘bullet maker’ and also knows where he would be making them. Eugene took her to the place he found a few seasons ago,

Towards the end of the episode we see Daryl and Rosita scouting Eugene’s outpost. Daryl tries to work out how to attack when they are outnumbered but Rosita has a better idea. Kill the bullet maker. 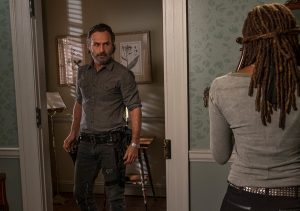 Rick walks in on Michonne as she’s reading Carl’s letter to her. She asks him what he said to him but Rick still hasn’t read it. She tells him not to go out looking for food and instead staying and reading the letter. He can’t do it. He talks to the Savior not turned ally and asks where he thinks the escaping Saviors would have gone. He tells him about a dive bar a few miles away and asks Rick to try and not to kill them all. He says they made a mistake by running but that not all of them are bad people and if given the chance would return and be cooperative. Rick makes no promises. 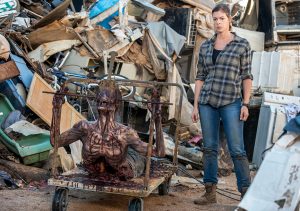 “My wife’s name was Lucille. She got me through. I didn’t give her shit, and she got me through. Just life … regular life. The bat, that got me through this. That’s it, nothing more to do with me than that. But it is the last little piece of her that I got left.” Negan

Jadis looks to be prepared to kill Negan. Negan tries to convince her that he didn’t order the killing of her people. “People are a resource.” he tells her. He promises to settle it if she lets him go which I take to mean killing Simon. She leaves him a lone for some reason and he manages to wheel himself over to get hold of a gun and a flare. he threatens to burn Jadis’ pictures which are the last thing she has. He tells her about his wife. His wife was named Lucille and she got him through life. That bat has gotten him through the apocalypse and so he named it Lucille and it’s the last thing he has that connects him to his wife. Pretty twisted and yet touching. She rolls out a zombie decorated shopping cart and lunges towards Negan who starts shooting at it. She tries to get the flare away from him and as they struggle that infamous helicopter appears. Jades gets the flares and lights one up. She tries to signal the chopper, “I’m here! I’m here!” but it turns and flies away. “What the hell is that?” Megan is as shocked as can be! 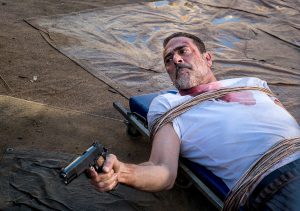 Jadis cuts Negan loose who asks her to join him back at The Sanctuary but she refuses. He tells her he will settle things for her and promises to swing by again to see how she’s doing. She goes back to her “hipster quarters”, unpacks and lays down. What is she waiting for? What will be her next move? 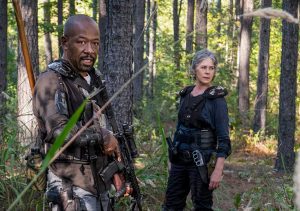 Morgan goes after the runaway Saviors with the intent of killing them all. Carol goes with him not to help him but to look after him. She knows he’s ‘not right’. He sees a vision of Henry in the woods – dead. They come across a walker with Henry’s stick run through him. Morgan believes Henry to be dead and while Carol thinks it too she still must go look for him. 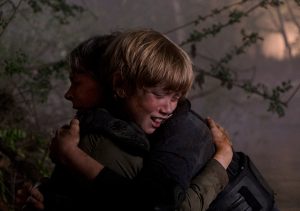 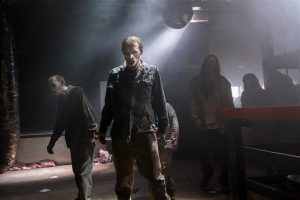 “There’s not a lot that’s worth much these days. But a man’s word … it’s gotta mean something, right?” Rick

Rick crazy with grief runs into Morgan, who’s just plain crazy and together they set out after the runaway Saviors but…they get captured instead. Sure enough, they’re hold up in that dive bar and a few of them are either sick or bit and no matter how many parts they’ve cut off of them they’ve had it. That douchebag Jarod wants to put them out of their misery and head for The Sanctuary. The others are conflicted about going back to a group that couldn’t care less for them. But they have ‘Rick the dick’ to bring to ‘the Big man’ and that is their ticket back in good graces. Rick tries to reason with them. A herd is on its way. He tells them that if they let him go that they can come back to Hilltop and they’ll get a second chance. He gives them his word. Morgan, on the other hand just sticks to his plan; kill them all and his motto; “Everyone turns!”. 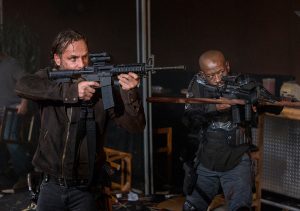 The herd arrives and some of the Saviors cut Rick and Morgan loose and take on the herd. But as they get control of the situation and even after Rick is saved by on of the Saviors, Rick and Morgan proceed to kill them all! I was stunned! Herod manages to get a way and Morgan goes after him. They have a knock down, drag out and eventually Morgan traps him in a rook filled with walkers who bit off his face and then chow down on the rest of him as Morgan watches with a satisfied grimace. 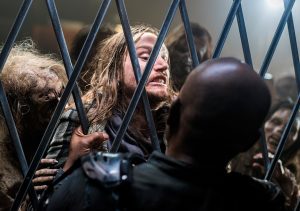 Rick finds one Savior still alive and Rick shoots him in the head. Cold as ice. He feels a little remorse and questions Morgan about why he saved Rick way back when in the pilot episode

“Just tell me. Why’d you save me?” Rick
“Because my son was there.” Morgan

Jerry is very excited when Carol arrives back at Hilltop with that little psychopath Henry. King Ezekiel was also happy to Henry and that Carol was the one that found him. Carol opens up to him about Sofia and that she sometimes shuts down when children are involved but she finds the strength to grow and evolve. Something she hopes Morgan can do and Michonne hopes Rick can do.

When Morgan and Rick arrive Morgan is stunned to see Henry alive. He actually reaches out to touch him to see if he’s actually there at first. He tells him that he killed the one that killed his brother, that he killed them all. Henry touches his arms and says he’s sorry. “Don’t ever be sorry” Morgan tells him

Rick gets cleaned up, he and Michonne tell each other they love each other and he finally sits down to read Carl’s letter. I was expecting to hear Carl’s voice narrate the letter but we don’t get that. We’re left to see Carl’s word register on Rick’s face in silence…..for now.

While Negan drives back to The Sanctuary he spots someone on the road, pulls over, pops open the door and says “Get in!”. So many secrets!

Then he gets to The Sanctuary gates and tells them not to say anything about his return. He has some ’surprises’ for certain people. I’m thinking Simon. Will it be the furnace or Lucille or does Negan have some new form of torture planned?

Although not as exciting as the last two episodes, Ep14 was nicely written and effective. Several storylines were satisfyingly handled.

Who is Jadis? Is she some sort of satellite scout for a whole other group? Who is in the helicopter? How was she able to communicate with them or does it come by on a regular basis?

Jades is a whole other person underneath the dirt and grime. She had that white slip under her ‘costume’ and that pristine room as her living quarters. She certainly is more interesting now than she was when we first met her.

Negan continues to reveal a more vulnerable side, setting him up to be saved at the end of the season. Prepare yourself. 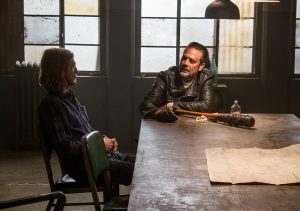 1 Negan will deliver Simon to Jadis so she can kill him. This should surprise Simon.
2 Maggie cannot die. AMC will make a deal with her.
3 Tara will bite the dust
4 Father Gabriel will give his life protecting Eugene.
5 Negan picked up Dwight’s wife. And that will certainly be a surprise to Dwight.