THE WALKING DEAD RECAP S8EP13 DO NOT SEND US ASTRAY 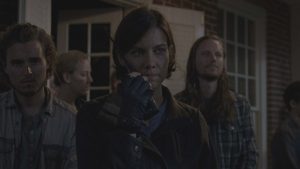 “Your 38 people are alive and breathing. Turn around and leave us be and they stay that way. But if you don’t, I have 38 bullets that I will personally fire into all 38.” Maggie

TWD kept on its winning streak with another fine episode. The storytelling seems to be stronger in the second half of the eighth season. I now have bigger expectations for the last three episodes of the season. But first lets talk about this action packed and scary story. The Hilltop rebels which now consists of Alexandria and Kingdom refugees ready for attack. That little punk Henry wants to help but Carol tells him no and that if he leaves the house he’ll be killed. Carol does not mince words. Morgan is seeing the ghost of Gavin. Gavin has a message for him and it’s driving Morgan crazy! 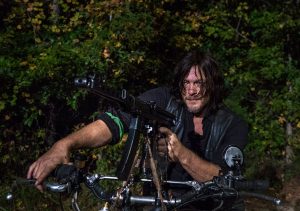 “This isn’t what he’d want. You know that right? He could still be out there. You sure you want to face that if he shows?” Dwight

Simon, now leading The Saviors and with his own orders of wiping out the rebels completely, arrive after dark at Hilltop. But Maggie has them ready and waiting. She tells Simon she’ll kill all 38 Savior prisoners unless they stop the attack. Simon doesn’t care. He is set on total destruction. Then all hell breaks loose! daryl shows up out of the forest on his bike and firing his mounted machine gun. The gate opens and he drives through but is followed by a Savior truck. Its all a trap! The Hilltop forces open fire! The Saviors start shooting arrows! Bloody arrows! Alexandria alumni, Tobin, gets sliced open but Carol saves him from a fatal blow. Sadiq comes to his aid. Simon and Dwight come up behind Tara. daryl sees them but she doesn’t. Before Simon can reach her Dwight shoots an arrow into her shoulder. This pisses Daryl off! 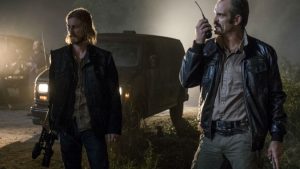 Maggie orders a retreat to the mansion. Simon leads his men slowly towards the mansion. He’s got the bloodlust rising. he wants to go inside and slaughter them all. But sure enough, another trap! The headlights turn on and gun fire comes from the mansion sending Saviors scurrying for cover. What in the world were they thinking? A real dumb move on Simon’s part. Rick finally shows up and leads the attack on the ground. Seeing that they are outmatched, Simon, Dwight and what’s left of The Saviors get in their trucks and leave. Rick and maggie pursue them past the gates, guns blazing!

“I wanted them dead. All of them — Negan most of all.” Maggie 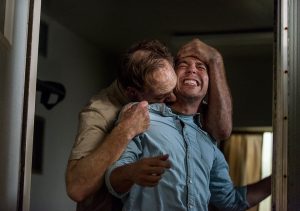 “If I knew that getting stabbed would get your attention, I would have done it a lot sooner.” Tobin to Carol

As everyone mended to their wounds and took a breath, Carol and Tobin shared a nice moment. She apologized for running off and hurting him and he showed that he still had feelings for her. Poor fella. Sadiq tried to tend to Rick’s wounds but Rick still holds him responsible for Carl’s death. Everyone is telling Maggie what a great leader she is but she sees the graves that Jerry dug for their dead and only feels responsibility. She laid the trap hoping that Negan would be there so she could kill him. Did her blind vengeance get these people killed? 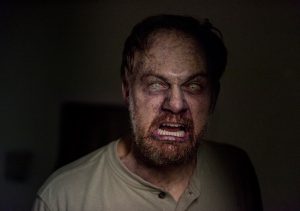 As night fell, everyone curled up in the mansion for the night. They were all sleeping so squished up together for some reason when there was plenty of room to spread out. Maybe they just felt especially close after all that killing. Well, this is when the real horror set in. Tobin was sleeping comfortably in the medical trailer when all of a sudden he stopped breathing. His eyes shot open1 Holy crap! He’s infected! He’s turning! Negan’s plan worked. Tobin soon is feasting on the lady doctor (doctors don’t last long in the zombie apocalypse) among others. Those that were wounded and sleeping in the mansion start turning too! Soon we hear the screaming and panic. It’s a nightmare! I haven’t felt terror like this on the show since the prison but somehow this felt even worse. Rick, Daryl, Rosita and Carol run to the rescue. It’s a bloodbath. Worst of all, Carol is the one that has to put Tobin down. She hesitates for a long time and I thought for a moment that she’d let him bite her but she does what needs to be done. After the danger is over they check on Tara. She had been shot with an arrow by Dwight so they assume she will turn as well. She takes the news pretty well, considering. 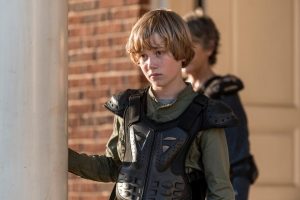 While all this was going on, Henry took his rifle and went out to the prisoners pen. he still wants to know who killed his brother. How would they know? they don’t know who you are, kid! Gregory tries to get him to hand over the weapon, The one nice Savior tries to reason with him but henry says he’ll start killing them one by one until one of them tells him what he wants to know. He opens the gate and walks into the pen. Just then, one of them starts munching on someone’s neck. One of them must have been wounded and turned. Then they hear the screaming coming from the mansion. They over power Henry and escape. 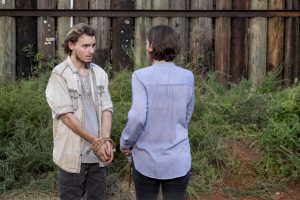 In the morning, the one good Savior tells Maggie that the most of the prisoners took off but he stayed as well as a few others because they could no longer be on the side of what The saviors had become. She allows him to help bury ‘his people’. he says they aren’t his but that he appreciated her referring to them as ‘people’. As Maggie looked out at the ever expanding graveyard she muttered “The cost…..the cost”. The cost of war? or the cost of her revenge? Either way, they won the battle and paid a heavy cost. 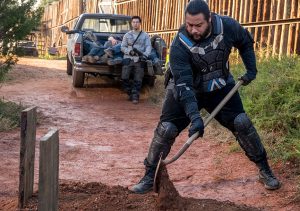 Simon plan was pretty anemic. A good henchman but not a good leader.

It’s time for Carol to tell Henry to ‘look at the flowers”.

Morgan’s going crazy again. Now he is having visions of Gavin telling him “You now what it is.” Guilt? OK. More evidence that Morgan is nearing his death. 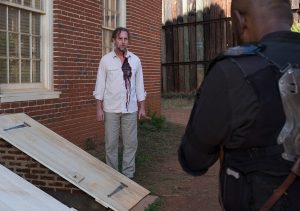 Now Daryl wants Dwight dead and Tara is coming to his defense. Get it together!

This episode had a great action sequence and a great horror sequence. I haven’t felt that scared watching the show in a long time! It was great! It felt like the old days! Maybe the show can turn things around going forward. It seems they are aware that they needed to at least. 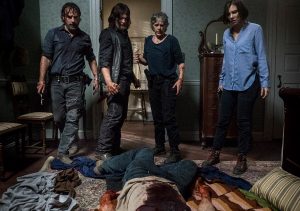 1 Tara will not die. She is not infected because Dwight did not dip his tips in walker blood.
2 Henry is an idiot but he is not dead.
3 Gregory must die!!!!
4 Young blonde Savior prisoner has got the hots for The Widow. Maybe the best way to merge Savior and Hilltop factions.
5 Jadis and Negan are going to show up at Hilltop via helicopter!