THE WALKING DEAD RECAP S8EP11 DEAD OR ALIVE OR 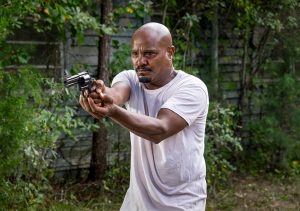 Some will say this is the episode that Walking Dead made the case that God was dead. Well, you can be the judge of that but by the end of Episode 11 Father Gabriel was in a world of pain. Daryl and Rosita have fun with swamp walkers and Dwight finds himself in the last place he wanted to be, back at The Sanctuary. 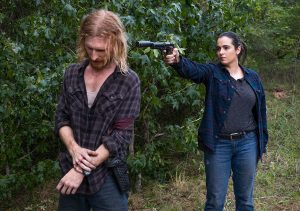 “I’m sorry about Denise, I truly am. I don’t expect you to forgive me, I don’t deserve it. But I just wanted you to know, that’s all.” Dwight

Daryl and Rosita lead the exodus from Alexandria to Hilltop but The Saviors are in hot pursuit. Dwight shows them a swamp area that The saviors always avoid because it’s too dangerous and propose they go that way to avoid capture. Tara, meanwhile, is dead set on killing Dwight. She even tosses a walker at him, literally. Daryl and Rosita tell her to knock it off and that Dwight can be useful. 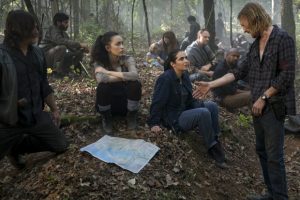 While Daryl, Rosita, Sadiq and a few others clear out the swamp of disgusting walkers, Tara forces Dwight off into the woods with the intention of killing him but before she can pull the trigger they run across a Savior search party. Dwight emerges from the woods and engages them. He tells them that he checked the swamp and he didn’t see them. He leads them away from the rest of the group. Daryl is pissed! But it seems Tara may now be convinced that Dwight has truly changed his ways. Of course, now Dwight is stuck with The Saviors again and there’s someone out there that knows of his betrayal. 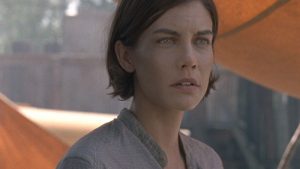 The Hilltop is running out of supplies. It’s so bad that Maggie decides to cut the rations of the prisoners. Gregory, who continues to address her as ‘Margaret’, goes so far as to consider abandoning The Hilltop and running as he feels The Saviors will take them out.
Morgan and his young protégé, Henry stand guard of the prisoners and Carol is worried about both of them. Then, The Alexandrians enter the gates of Hilltop. Maggie’s smile turns to a frown as Daryl tells her and the others that Carl is dead. This all plays out silently with music only. We see Enid’s heartbreaking reaction. Daryl hugs carol and they make their way up to the big house. The news seems to have some effect on Morgan. He tells henry that it was Gavin that killed his brother and since Henry has already taken him out there’s no need to seek further vengeance. Carol approves. 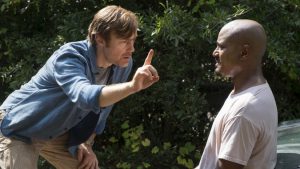 “We’re on the right path even if we’re on the wrong road.” Father Gabriel

Negan is pretty pissed that their doctor and that ‘creepy priest’ escaped. He questions Eugene about it and he has that look in his eye that asks, “Was it you?”. Eugene holds up well under questioning though and Negan pins the blame on the good doctor.

Father Gabriel and Dr. Carson get stalled in the road when their car breaks down. Also, the padre seems to be losing his eyesight. His mysterious illness and infection seems to be related to lathering himself with walker guts when he and Negan escaped that trailer. He may have gotten some walker blood in an open would or in his eyes and got ‘somewhat’ infected? Father Gabriel’s faith is still very strong, however, and he hears what he thinks are bells and leads them to discover an abandoned home. They find antibiotics there which help Gabriel recover enough to be out of danger of death but the damage to his eyes may be permanent. Then by accidentally knocking over a piggy bank and breaking it open, they find keys to a car and a map that will help them find The Hilltop. 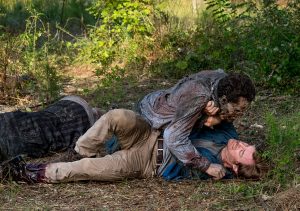 Gabriel sees all of these things as God’s work. He has been telling a skeptical Dr. Carson that God is still here and that he will lead them to salvation. The Doctor starts to believe it! Then as they’re about to start that car and cruise down the road with smiles on their faces they get caught by a group of Saviors. As they are being loaded into the back of a pickup truck, Dr. Carson lunges for a nearby Savior’s gun and gets shot and killed. Father Gabriel is devastated. He believed his purpose was to get the doctor back to Hilltop to help Maggie. All the signs from God that happened led to naught. His faith must be shattered. This leads to the only logical conclusion that God is dead, at least in the hypothetical realm of the zombie apocalypse. 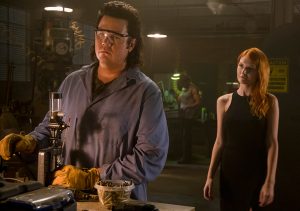 Negan puts Eugene in charge of his own outpost with the prime directive of making bullets. He gives him a security detail and even two of his wives to cook and offer ‘foot massage’. When one of these beauties comes along while Eugene is working he treats her like shit and tells him to take his lunch order back to the other woman. He really is terrible. Then, Negan barges in with Father Gabriel in tow. The jig is up for Eugene! But, no. The padre doesn’t give him up and blames Dr. Carson instead for their escape. Negan buys it and then gets annoyed with Eugene for being too slow with the bullet making. Eugene advises tossing walker parts over the walls of The Hilltop using catapults. This gives Negan an idea. They’ll weaponize their bullets, knives, swords and any other weapon of choice with walker guts and blood. They don’t have to kill everyone. Just infect them and let them turn. Could this work? We’ll find out. 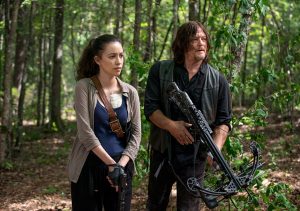 This episode moved along very nicely. This may be the best paced episode of the season so far.

If Father Gabriel, Tara and Dwight were killed off would we all be ok with that? 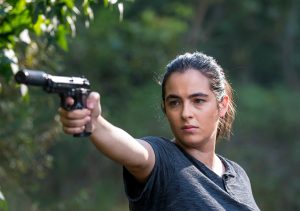 The doctor didn’t seem too smart. He didn’t even bother to notice all the meds in that house! It was Father Gabriel who had to point it out to him!

Remember when Maggie’s pregnancy was in danger and they had to rush her to the Hilltop because they had a doctor? That was at the end of Season 6! We are now at the end of Season 8 and she’s not even showing! And she certainly seems to be healthy and out of danger. Why is there this incessant need to get Maggie a doctor? 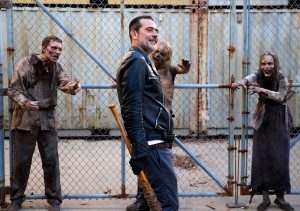 Since when did getting walker blood in your eyes get you infected?

1 Dwight is dead
2 All 38 of those Savior prisoners must die and I include Gregory in that lot.
3 Jadis will come back and kill Simon before Negan gets a chance to.
4 We will see Dwight’s wife again before the end of the season
5 The Hilltop will be the sight of the finale showdown. It’s like The Alamo.