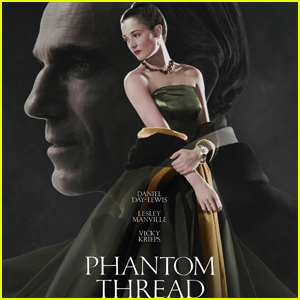 “It’s comforting to think the dead are watching over the living. I don’t find that spooky at all.” Reynolds Woodcock

I’ve been a Paul Thomas Anderson fan since I first saw Hard Eight (1996). Then, Boogie Nights (1997) came out and I thought it was simply amazing. Magnolia (1999) was his Robert Altman-esque masterpiece. Punch Drunk Love (2002) was his attempt at romantic comedy which showcased Adam Sandler in an eye-opening performance.

It was five years before his next movie, There Will be Blood (2007), came out. It marked a significant change in style and scope than his previous films. It was a dark film about men with dark souls. It was his first collaboration with Daniel Day Lewis and Johnny Greenwood. Greenwood’s score fit Anderson’s visuals beautifully and Day Lewis won another Oscar for his magnificent performance. 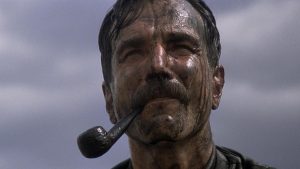 Anderson followed up with his meditation on Scientology, The Master (2012), featuring an Oscar nominated performance by his longtime friend and collaborator Phillip Seymour Hoffman. It would sadly, be their last film together. The Master was another character study like There Will be Blood and it was complicated and demanding but fascinating and mesmerizing. Anderson’s adaptation of Thomas Pynchon’s novel Inherent Vice (2013) came next. It was a zany detective yarn set in 1970s Los Angeles. I considered this one his only miss so far. 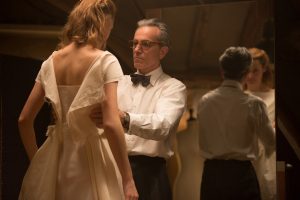 I had seen a special screening of There Will Be Blood before it was released. Anderson and Day Lewis were there and spoke after the film. It was obvious that they liked each other and had enjoyed making the film. They had said they would like to work with each other again. When Day Lewis announced that he was retiring from acting it made sense that his last film would be with Anderson.  Phantom Thread, like There Will Be Blood and The Master, are character studies but it has a very different tone and style than those films. It is lush and graceful and delicate. It is a love story. A very different kind of love story. 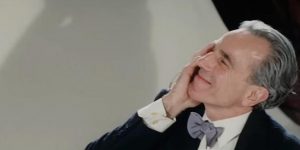 “Marriage would make me deceitful and I don’t ever want that.” Reynolds

Reynolds Woodcock (Daniel Day Lewis) is a celebrated fashion designer. He lives in a large, multi-floored house with his sister Cyril (Lesley Manville) and a team of women who sew together his beautiful creations. He is very fastidious and sticks to his routine religiously which lives little room for anyone to take up time and space in his life. His current ‘girlfriend’ seems to have disappeared from his life while still being around. Cyril asks if she should ask her to leave. 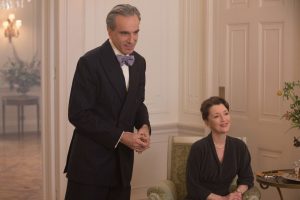 “She’s getting fat sitting around waiting for you to fall in love with her again.” Cyril

Reynolds just nods his head in the affirmative. He heads out that evening for the country and at a small restaurant he meets Alma (Vicky Krieps), flirts with her over ordering his breakfast and takes her to dinner that night. She accompanies him back to his fashion lair and becomes his muse, his model, his assistant and perhaps his girlfriend? Sometimes lover? Alma is different from the others.  She will not just disappear. She wants to be an active part of his life and soon his routine is being disturbed. 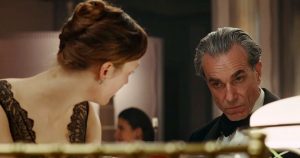 She brings him tea while he is working and Reynolds flips out and demands she leave.

““The tea is leaving, but the interruption is staying right here with me.” Reynolds

The power struggle continues and they have terrible fights but she doesn’t relent.

“Were you sent here to ruin my evening and possibly my entire life?” Reynolds 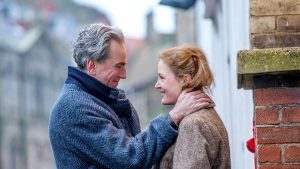 It’s very unsettling to watch because it reminded me of relationships I have been in. It reminded me of being in love. You resist anything new in your routine, you expect the other person to make due with the corners you’ve left for them to exists in. If someone really loves you they don’t settle for that and demand more, more space, more time, more commitment. Sometimes these relationships break and sometimes they strengthen. I wasn’t sure until the very last moments which would be the case for Reynolds and Alma. 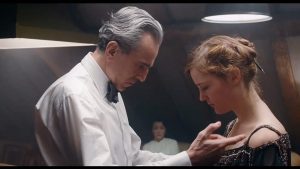 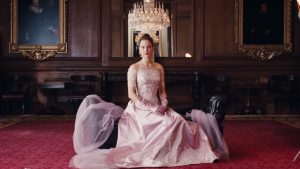 Phantom Thread is a beautiful film. It’s beautiful to look at. Johnny Greenwood’s score is lush and gorgeous. The acting is spot on. Daniel Day Lewis is amazing and Kriep and Manville match him in scene after scene. Anderson again surprises with something different and new. It may not be to everyone’s taste but it will have you thinking and talking about it long after you’ve left the theater. Like love, you may resist Phantom Thread but it does not relent. Indeed, ‘the tea may leave’ but the interruption will stay with you.