“The Times has 7,000 pages detailing how the White House has been lying about the Vietnam War for 30 years.” Ben Bradlee (Tom Hanks)

If you’ve always loved All The Presidents Men (1976) and secretly wished there was a sequel, your prayers have been answered! Although, this is, actually a prequel and there’s a tip of the hat to Watergate at the very end. Director Steven Spielberg had planned Ready Player One to be his next film but because of a casting setback he had time to squeeze in this little movie about freedom of the press, a pretty timely topic. 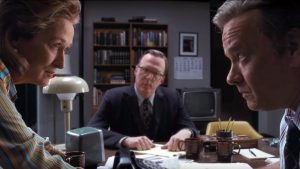 In 1971 Daniel Elsberg (Matthew Rhys) copied all the Pentagon intel pertaining to the Vietnam War and handed it over to the New York Times. They started publishing them, letting the country know that the government had known all along that this was an unwinnable war and continued to lie to the public. Nixon obtained a federal court injunction forcing the Times to cease publication after three articles. Washington Post editor-in-chief, Ben Bradlee (Tom Hanks) got his hands on them and the decision to go to print with them rested in owner Katherine Graham’s (Meryl Streep) hands. The movie is about how this all transpires and the decision and the aftermath which was, of course, a great victory for the freedom of the press and The Washington Post which would later take the lead on the Watergate story. 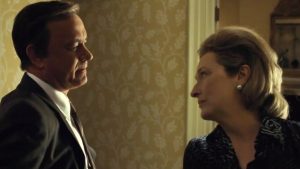 It’s a great history lesson at a time when the press is under fire by the president of the united states much as it was at that time. Spielberg is a master storyteller and he infuses the film with great energy and pace. It flies by like a history lesson disguised as a heist film. Tom Hanks is appropriately gruff and stoic as Ben Bradlee. Bob Odenkirk has a nice turn as reporter Ben Bagdikian. The rest of the cast is peppered with fine actors who all get their moment including Tracy Letts, Carrie Coons, Bruce Greenwood, Bradley Whitford, Alison Brie, Jesse Plemons and Sarah Paulsen. 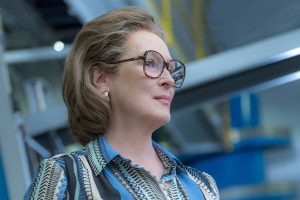 “Nixon will muster the full power of the presidency and if there’s a way to destroy you, by God, he’ll find it!” Robert McNamara (Bruce Greenwood)
“ I’m asking your advice, Bob, not your permission.” Katherine Graham (Meryl Streep)

Meryl Streep is simply fantastic as Katherine Graham. Yes, that is only what we expect her to be in every film but she never ceases to amaze. There are moments where you just shake your head at her performance. She doesn’t hit a false note. 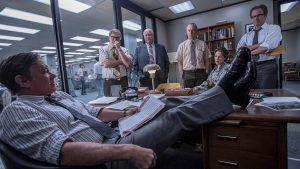 In these days of 24/7 news on TV, Facebook, Twitter and wherever else you can get news, it’s hard to imagine a time when people relied on newspapers to break a story, to bring you the truth, to open your eyes about something you may not have given a second thought. The Post is not the great film about journalism that All The President’s Men is but it’s pretty damn good and certainly a needed boost to morale. 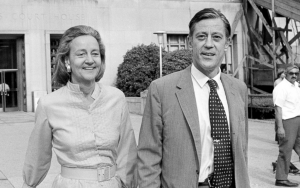