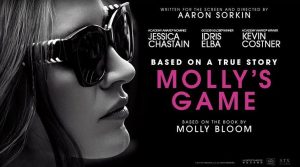 “If you think a princess can do what I did, you’re incorrect. I’m getting it, you don’t think much of me, but what if every single one of your ill-informed unsophisticated opinions about me were wrong?” Molly

I didn’t know anything about Molly Bloom, her book, her situation or this famous poker game she ran whose players were some of the most famous men in film, business and sports. It was written by Aaron Sorkin and that was all I needed to know to want to see it. 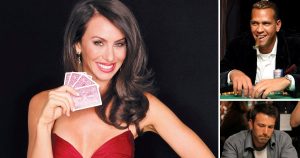 Gambling has long been a sexy subject for a film. Steve McQueen was the cocky card shark in The Cincinnati Kid (1965), James Caan was the college professor with a gambling problem in The Gambler (1975), more recently we have the film 21 (2008) about a group of college students who go to Vegas on the weekends to count cards for their professor/con man mastermind (Kevin Spacey). Molly’s Game adds a new twist to the genre, a film about a woman who runs a high-priced poker game. Based on the true story of Molly Bloom and adapted from her novel about her experience, Aaron Sorkin has made an exciting, suspenseful, emotional film supported by a great performance by Jessica Chasten as Molly. 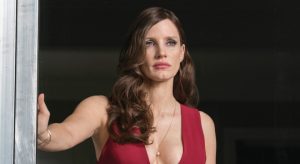 Molly comes from a family of over-achievers, prodded on by her over bearing father (Kevin Costner). Molly became a world class skier and in the opening sequence she takes a serious fall trying to qualify for the Olympics. Her resentment of her father leads her to take off on her own and she lands in Los Angeles. While working in a club she garners the attention of a real estate developer who hires her and then puts her in charge of the high stakes poker game he runs. She becomes very good at managing the game and becoming well-liked by the high rollers, some of which are big name actors and sports stars. She eventually starts running her own game and becoming quite successful. 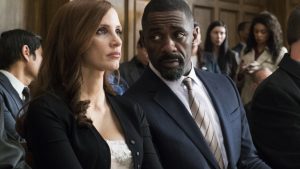 The story is told in flashback as she gets in over her head and gets caught up with the mob and Russian gangsters which brings down the FBI on her and her game. She hires an attorney (Idris Elba) who comes to respect Molly and becomes a powerful advocate and ally. 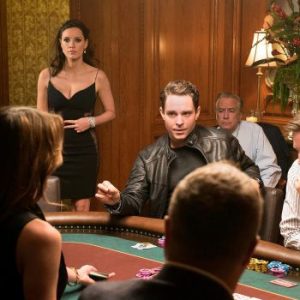 Sorkin is a great writer.  He writes a screenplay like he’s writing an essay. His first scene sets up Molly’s character and through line. He then builds the story, bopping back and forth from present to past and back until the very last scene which brings you back to the beginning, literally. He received a well-earned Oscar nomination for the script.  His direction is no less impressive, especially as it is his first try behind the camera. He gets a powerhouse performance from Chastain. She deserved a nomination, too. Elba and Costner lend strong support. Michael Cera is perfectly smarmy as a powerful actor that turns on Molly. 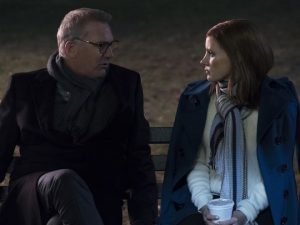 You may look at the plot and think, “I’m not a gambler. I’m not into gambling.” But the movie is not about gambling. It’s about an extremely smart and motivated woman. It’s a thriller and a family drama. It’s funny and exciting. It’s Aaron Sorkin at his best. Give it a try.  I promise you will not be disappointed.