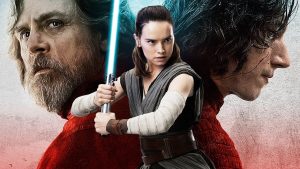 “I only know one truth. It’s time for the Jedi… to end.” Luke Skywalker

It’s been a few days since I saw The Last Jedi and I think you need a few days to process everything that comes at you in this two-and-a-half-hour film (the longest Star Wars ever!) I really like the movie and there are some great moments but there were also some slow parts and some moments that seemed to be beyond what we’ve come to know is possible in the Star Wars universe. 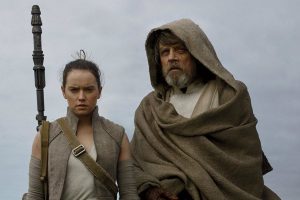 The best scenes in the film are, of course, the Luke (Mark Hamill) and Rey (Daisy Ridley) scenes on Ahch-To, very reminiscent of Luke and Yoda on Dagogah in The Empire Strikes Back. Rey is eager to learn the ways of The Force but Luke has become a bitter old man. I feel the exact same way sometimes when I’m talking to ‘millennials’. We also see that Rey and Kylo Ren have a serious telepathic connection and can speak and see each other. Rey feels Kylo can be redeemed. Luke does not. Chewbacca gets to play with the new version of Ewoks called Porgs. They’re cute. Your kids will want one. 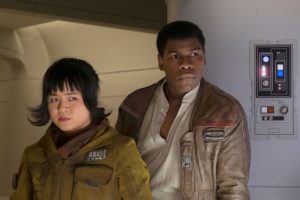 “We’re going to win this war not by fighting what we hate, but saving what we love!” Rose

The Resistance is in dire straits. They are being chased by General Hux (Domhnall Gleason) the First Order fleet and being picked off slowly. General Leia Organa (Carrie Fisher) and newcomer Vice Admiral Holdo (Laura Dern) try to stall while they come up with an escape plan but that’s not good enough for the impulsive hot head Po Dameron (Oscar Isaac). Po comes up with a plan and sends Finn (John Boyega), Rose (Kelly Marie Tran) and BB8 to Canto Bight, the Monaco of the galaxy to retrieve a super thief who can break into the First Order computer and disable their tracking device. This part of the film is the slowest and least interesting but it does introduce us to DJ (Benicio Del Toro) a shady thief and several little children/indentured servants who have heard about the Resistance and look at Finn and Rose as heroes.

“Let the past die. Kill it, if you have to. That’s the only way to become what you are meant to be.”    Kylo Ren

Kylo Ren (Adam Driver) is mad as hell and in Snoke’s (Andy Serkis) dog house. Snoke chides him for losing his battle with Rey, a novice! He wants the Jedi to be finished meaning he needs Luke dead and the Resistance crushed. Kylo goes about trying to accomplish this. 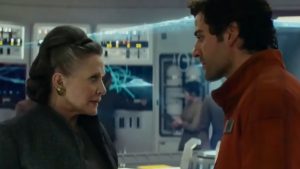 “This is not going to go the way you think!” Luke Skywalker

The final showdown scenes are excellent. The special effects are magnificent and you really feel a sense of danger and intensity. There are so many call backs to other films in the canon. You will need a second look to catch them all. Director Rian Johnson (Breaking Bad, Looper) truly delivers the fireworks and the emotions that were expected. He not only directed but wrote the script. Much like The Empire Strikes Back, this follow up to The Force Awakens is darker and takes more risks with the characters. The story is nicely layered and the payoffs are deserved and satisfying. 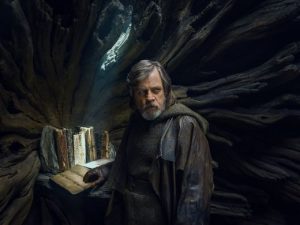 Adam Driver brings it again as Kylo Ren, the spoiled brat of the galaxy. He reminds me of a young peter O’Toole. He can underplay effectively and then take it up to eleven with indignation and rage! It’s truly operatic. Daisy Ridley is solid and earnest. Oscar Isaac gets more to do but he’s mostly an overly aggressive male who won’t listen to his female superiors. He’ll learn, I’m assuming and mature in the next film. Laura Dern is always a welcomed presence and her scenes with Isaac have a nice snap to them. Carrie Fisher looks fragile but she’s still has that twinkle in her eye. The film is dedicated to her as it should be. But it’s Mark Hamill’s show! He knocks it out of the park. He’s been waiting a long time for one more acting showcase and he does not disappoint. He is excellent as the older, more cynical Luke Skywalker. The film really does rest on his shoulders and his character propels the story forward into the next film. 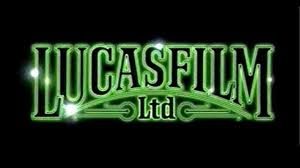 I’ll be honest, the film didn’t knock my socks off, though I couldn’t help but get giddy as a school boy when the LucasFilms logo appeared and you see “Long ago, in a galaxy far, far away…..”. I loved the movie! It drags here and there but it finished strong. It also stays with you and gives you so much to think and talk about. It needs a second viewing to really appreciate all the small touches Rian Johnson peppers the film with. It’s a great achievement.

I will now go a little further and talk about some specifics so if you haven’t yet seen the film do not venture further!!!!!!!!

“The greatest teacher, failure is.” Yoda

The overarching theme of the film is how one must learn from failure. Every plan made by every character fails in this film. Luke finally decides to engage again and his final act is to save the ones he loves and give hope to The Resistance with his showdown with Kylo Ren. He accepts his failure with Kylo and owns it. He never felt he deserved the legendary status he had been given over the years but he earns it at the end. The children we are introduced to in the Finn-Rose plotline come back for the last scene.  We see them playing with little stick figure toys and reenacting the Luke-Kylo showdown. Young resistance fighters in the making.

Did you notice when the little boy goes outside to sweep up that the broom moved into his hands? The Force is strong with that one.  This also reinforces the notion that you don’t have to be from a certain lineage to be strong with The Force. Kylo tells Rey she comes from nobody special. All the theories about who her parents are were wrong. Remember Anakin Skywalker also came from poor folks. 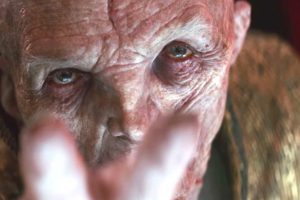 Snoke gets smoked! No one saw that coming. In a scene that reminded me of the end of Return Of The Jedi, Snoke is torturing Rey and Kylo seems sympathetic. He then slices Snoke in half with the lightsaber. In Return of The Jedi Vader turns on his master to save his son and dies a redeemed man. Kylo may have saved Rey but his intentions were not so noble. He intends to rule the galaxy with Rey by his side. Of course, she rejects his open hand just as Luke rejected Darth Vader in Empire. 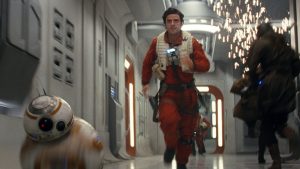 Poe Dameron does not like authority. Or is it that he doesn’t like to take orders from women? He gets spanked by both Leia and Holdo. I’m sure he’ll mature by the next film and become the leader that Leia hopes he’ll be. His storyline and the Finn-Rose storylines were not very interesting. I don’t find Poe or Finn that interesting. Maybe there are just too many characters to be able to give everyone the time they need to ripen.

I wasn’t thrilled with the Leia in space resurrection. Is she that powerful that she could survive exposure in space? That was a stretch.

Luke having the power to project himself was another new trick I’ve never seen before. It was clever! I liked how he winked at C3PO. I didn’t understand at first but then realized that C3PO knew he wasn’t there and just a projection and Luke acknowledged that with a wink. I imagine we’ll see Luke again just we saw Yoda again! That was retro Yoda, too! That was muppet Yoda not CGI Yoda. Welcome back, old friend. His scene with Luke was wonderful. Luke regressed back to his petulant child voice when he screamed “but those are the sacred texts!”.  Just goes to show you that you’re never too old to learn and grow. Of course, Rey had taken the books with her. Yoda knows this which is why he so non chalantly called down that lightening and set the sacred tree on fire.

The film did offer a lot of surprises and leaves us wondering just what is going to happen in the next film. I have a feeling the film will get better with each viewing and my criticisms will feel trivial. You may feel the same way.