THE WALKING DEAD RECAP S8EP8 HOW IT’S GOTTA BE 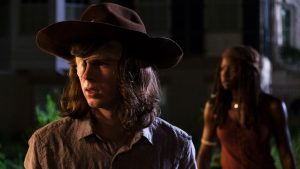 Well that was a good mid-season finale except for all the commercial breaks. It’s been a frustrating season so far. I don’t think the ‘all out war’ has been handled sufficiently to completely thrill. A lot of plot gaps and confusion about what’s going on. I don’t like all the time spent on close ups of the characters looking serious as if something profound is happening. Don’t get so full of yourself Walking Dead. Just give us some good drama mixed with some solid action.

The big twist here is that Carl got bit and he’s a goner. This breaks with the comic in a gigantic way. I hope the show will use Carl’s death to really ignite the energy in the show and give us some good character episodes, namely how Rick will change because of this.

RICK AND THE SCAVENGERS 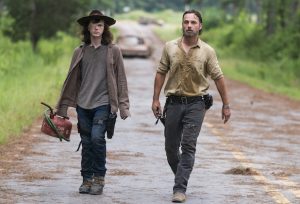 “It’s not enough. If you give a shit, if you care, you do something.” Carl

We see a flashback of Carl and Rick walking down the road. Rick had just scared off Sadiq. Carl tells him that he needs to rethink the idea of killing all The Saviors, that they need to bring them in, that there still needs to be hope.

Rick and The Scavengers enter The Sanctuary compound and get shot at. The Scavengers apparently run away but lucky for Rick, Carol and Jerry pull up and jumps into their truck.

Eugene feels guilty and can’t sleep no matter how much wine he drinks. He finally decides to allow Father Gabriel to escape and take the doctor with him. Does he realize what the consequences of his actions will be? Seems like an unusual move to make after going all in with Negan in the last episode.
By the way, what was his big plan that apparently worked? And just how many Saviors survived? It seems like all them! Negan seems to have an endless supply of goons.

So, Aaron’s big plan to win the war is to drive to Oceanside and ask the women to help? They already refused! And Rick already took all their weapons! What a stupid idea. Aaron mourns his boyfriend and Enid is allowed to drive. She comes up with an idea to stop at a distillery in order to take them an offering to get them to help. Unfortunately, they run into a group from Oceanside in the night and Enid kills Natania thinking Aaron was in danger. Whoops! 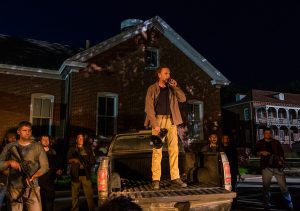 Gavin shows up and takes over The Kingdom and looking for King Ezekiel. Ezekiel finally comes out of his self-pity coma to find a way to distract The Saviors and allow his people to escape with the help of Carol.

Ezekiel, closes the gate and tells Carol to “Save them as you have saved me”. He sacrifices himself by being captured. We also see Morgan lurking nearby but he doesn’t act….yet.

MAGGIE AND THE HILLTOP 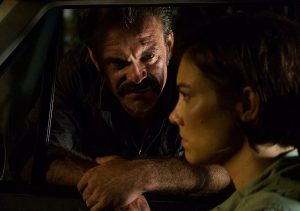 Maggie and Jesus lead a caravan headed to The Sanctuary. Apparently, part of Rick’s plan was to return to The Sanctuary and have The Saviors surrender. Why do this at night? Why didn’t Tara and Daryl let Maggie know what they did? There’s a tree blocking the road. Maggie knows exactly what that meant. Yup. Simon and The Saviors ambush them. They have Jerry as a prisoner and threaten to kill him if they don’t surrender all their guns. This again? 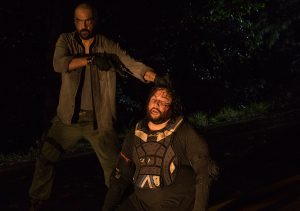 Apparently, they have more people than Maggie brought along or why wouldn’t they fight? Simon has a coffin taken off the truck and placed on Maggie’s car, meant for Jerry. Simon tells Maggie that The Hilltop is being given a reprieve because they produce a great amount of crops but they will have to kill someone as punishment. Simon shoots Neil who was sitting in the backseat. I know his name is Neil because he said a line previously and Jesus said his name. That was supposed to make me care for him? Maggie asks that she be given the coffin so they can bury Neil. Simon agrees and lets them go! Hmmm, not sure about that strategy. Wouldn’t they send some Saviors along to guard them? Don’t they know there are 40 Savior prisoners at The Hilltop?

When Maggie gets back to The Hilltop she goes straight to the prisoners holding pen. She has Dean brought out. Dean was the one that Jesus decided not to kill even after he attempted to kill him and Tara. Maggie shoots him in the head. Payback for our beloved Neil. She tells Jesus to put Dean in the coffin with a note saying they 38 more and to “Stand Down”. 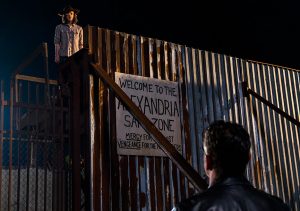 Well, the backbone of the episode is Carl. We opened with the flashback where carl is trying to tell Rick things could be different. I knew immediately he was a goner. We also hear Enid say that she’s a much better driver than Carl with a big smile on her face. This is going to hit her hard. Then we see Carl in some amount of discomfort but we don’t know why. He writes a note to his father and looks at the note that Enid had left for him once saying ‘just survive somehow’.  All ominous signs.

Daryl and Tara think their plan has worked. Why would they believe this? They didn’t stick around to make sure. Then all hell breaks loose! It’s night and they hear a familiar voice from over the wall.  It’s Negan! They got out! (through Eugene’s genius plan!) This is when Carl takes over.  He starts barking orders. Everyone has got to leave Alexandria! Michonne tries to protest but carl shuts her down.  HE’s in charge and they’re going to follow his plan. While everyone plans to high tail it out through the back, Carl gets on top of the wall and confronts Negan. Negan seems impressed.  He’s always liked Carl. Negan starts a full-on assault. Alexandrian gets bombed and set on fire.  Carl sets off gas bombs and escapes through the sewer system.

Meanwhile Daryl and the gang escape through the back and set up to fight. Dwight and The Saviors rush to confront them but of course Dwight leads them right into the line of fire. He even gets out of the car fires on his own.  He gets shot in the arm and I almost thought Tara was going to finish him but Daryl believes that Dwight has kept his word and is fully on their side now. They all go to hide underground in the sewer tunnels.  Michonne, however, ventures out, perhaps to find Carl.  Rick finally shows up and sees Alexandria on fire.  He goes straight to his house looking for Carl and Michonne and guess who’s waiting for him? Negan and Rick battle mano a mano! Rick even gets a hold of Lucille and takes a whack at Negan before Negan shoves him out the window. He runs into Michonne who takes him into the sewer where everyone is hiding. They find Carl who doesn’t look well.  Carl lifts his shirt and reveals a bite mark. Noooooooo! 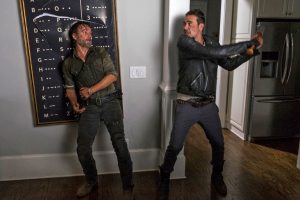 Carl will die in the 2/25 episode and this should leave a huge hole in the heart of the series and Rick grimes. I’m glad they killed a major character but I’m not sure what toll this will take on the story.  That’s a good thing. For too long TWD has been predictable. I’m hoping it will find its footing and become a suspenseful show again.

Maggie is the only one that seems to know what it takes to fight and win.  She’s the best character this year for sure.

The best episode of the year is EP4, ‘Some Guy’; the King Ezekiel centric episode where we lost Shiva.

Carol calling Ezekiel “Your majesty” as he closes the gate on her.  Sorry Daryl and carol shippers! Her heart belongs to the King.

What happened to Jerry once Maggie agreed to surrender her guns?  Did he stay The Saviors’ captive? 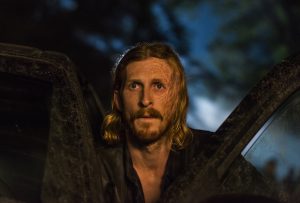 Dwight only gets shot in the arm? Cop out!