THE WALKING DEAD RECAP S8EP6 THE KING, THE WIDOW AND RICK 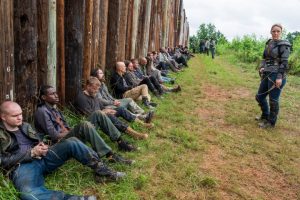 Look, Rick, I know you have this, like, big master plan to defeat The Saviors but, come on! You walk into the garbage dump to try and make another deal with back stabbing Jadis and the garbage people by yourself? Armed with only poor polaroids? And King Ezekiel, get it together! Jesus! How can you be so naïve? Daryl and Tara! Calm down! Michonne, Rosita, Aaron, Enid! Why do you all continue to venture out on your own without telling anyone. It never turns out to be a good idea. So, all of this is a means to create drama, conflict, suspense, I get it. But they should all be smarter by now. And there must be consequences for such foolish actions. I’m saying the trigger needs to be pulled, Scott Gimple. You need to kill off some of these major characters. 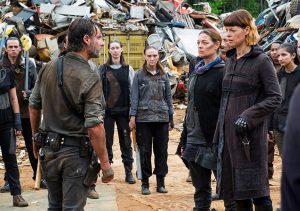 “Talks too much.” Jadis

Rick marches in on The Scavengers during arts and crafts class. Apparently Jadis likes to work in the nude wearing only a brown leather apron. He brings polaroids to show them that The Saviors are going to lose and that they should side with him. It doesn’t work. He is promptly locked up. They also take his clothes and shoes! This is on weird, kinky group. Are they going to now go to aid Negan at The Sanctuary? I’m thinking yes and that means they are going to run into……… 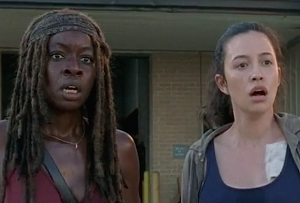 Michonne got bored sitting around, recovering from a serious beat down, decides she wants to go see The Sanctuary for herself. To do what? Lord knows. Rosita, also recovering from being shot decides what the hell! I’ll go with you! They hear singing and decide to check it out. They find 2 Saviors prepping a truck with speakers intended to lure the walkers away from The Sanctuary so the others can get out. Rosita executes the male Savior with a rocket! As my friends, Erin and Charlotte shouted in unison as we watched, “VAPORIZED!” 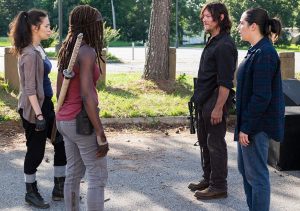 Michonne battled the female Savior but she is still weak and the Savior gets in the truck and starts driving away. But she didn’t get far because Daryl and Tara rammed the truck with their bigger truck. You See, Daryl and Tara want revenge. They don’t want to follow Rick’s plan anymore. They want to end it and every Savior in The Sanctuary. The four of them decide to join forces and finish the job. One of them must die for this terrible decision. 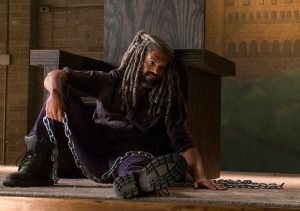 “I can’t be what they need” King Ezekiel

The community grieves and makes memorials for their fallen soldiers as King Ezekiel sits on the stage in the theater looking depressed and clutching Shiva’s chain. Jerry stands guard outside but carol walks right past him and tries to get Ezekiel to stop feeling sorry for himself and get back in the fight. He can’t do it. 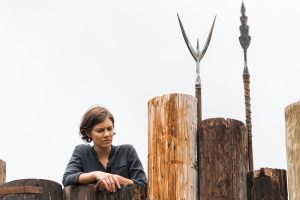 “You can’t have wolves walking around amongst the sheep…it’s as simple as that.” Gregory

Maggie agrees to allow Jesus to bring the Savior prisoners inside the gates of The Hilltop against Gregory’s advice. In fact, she tosses Gregory in the fenced off prison with them. I actually felt sorry for him when she did that but he is a traitor who can’t be trusted. Jesus thanks her but Maggie warns him that she only did it to use them as bargaining chips. If they prove not to be worth any trade she will have them killed. It’s only a matter of time before they get loose and wreak havoc. 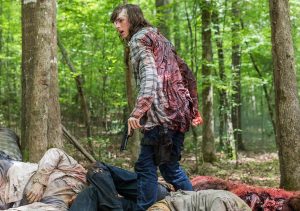 Another idiot goes off on his own! Carl finds Saddiq out in the woods and agrees to take him back to Alexandria with him. They come across a group of walkers and decide to take them on. I almost thought that Carl got bit! It would have served him right. It was a stupid thing to do. Let’s see what Saddiq brings to the table and how mad Rick will be when he finds out.

Carol found another kid, Henry, to toughen up. Will he end up like all the others? “Look at the flowers……..” 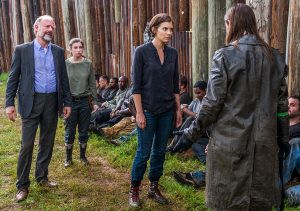 This may be the year Daryl finally gets it. His thirst for vengeance will have consequences. If not for him then for Michonne, Rosita or Tara. 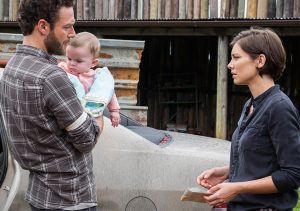 Aaron, who promised to take care of Gracie, has now decided to go off on his own! (Another one!) To do what? Lord knows. But that’s good enough for Enid! She goes with him!

The only one that is acting with a clear head is Maggie. But with everyone deciding to do whatever they want and leaving The Hilltop can she alone protect them? With two episode left before the Winter Break, I see disaster on the horizon.