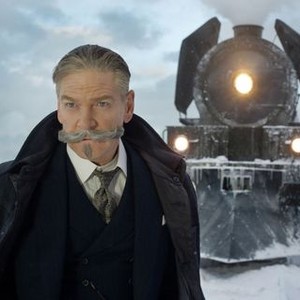 “I see evil on this train.” Hercule Poirot

You know what I see? A lot of big name stars in a big deal movie! Based on the 1934 novel by Agatha Christie and the terrific 1974 film of the same name, this Murder On The Orient Express starts thrillingly before getting stuck in the snow midway through. It manages to get back on track to finish with a nice flourish and hint at a Death On The Nile sequel. 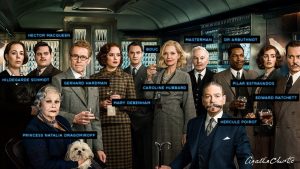 If you’re not familiar with the plot the long and short of it is this: A colorful assortment of characters board the famous train including the great Belgian detective, Hercule Poirot. One of the passengers is murdered in the middle of the night and as the train has gotten stuck in the snow, Poirot is asked to conduct an investigation and solve the murder before the train reaches its next stop. 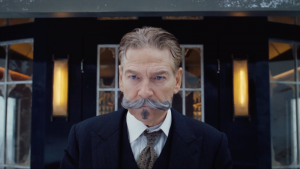 “My name is Hercule Poirot and I am probably the greatest detective in the world.”

Kenneth Branagh not only directs but he also plays Poirot. He is wonderful as Poirot. He’s a smug perfectionist who is amazingly attentive to details. And that moustache!! I have never seen anything like it in my life! It works as does his performance. The direction he steers the film is not as successful, however. He mounts a beautiful production. It looks great! He’s put together an excellent cast and he extracts some good performances, especially from Michelle Pfieffer. Pfieffer not only looks amazing but she gives an impressive performance as Mrs. Hubbard, a woman looking for another husband or at least some fun along the way. She makes everything look effortless. 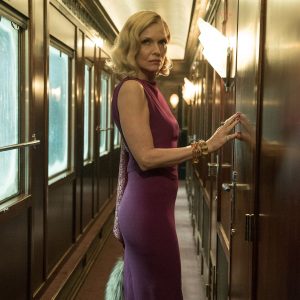 “Your eyes linger any longer and I’ll have to charge for rent.” Mrs. Hubbard

I think what caused the film to frag in the middle is the tone that is set. An Agatha Christie novel is usually something one can finish in an afternoon at the beach or on a long flight. It should be light and move swiftly so as to get confused by the twist and turns. But this Orient Express gets caught up in too much seriousness. Branagh goes for something deeper than just a whodunit. He injects pathos, pain, regret, reclamation, a mourning of the soul. These are all worthwhile themes and obviously allows for me scenery to chew from the actors but it just slows things down.

Even with all that said, I did enjoy the film and would recommend it, especially for the performances of Branagh and Pfieffer. Even with its flaws its still a top notch Agatha Christie murder mystery with a top notch cast. It’s also nice to see a film propelled by story and good acting.  Johnny Depp is fun to watch though he twirls his moustache a little too much as the villain. Josh Gad and Derek Jacobi are reliably good. I liked Poirot’s immoral young friend, Bouc (Tom Bateman). I hope Branagh does do Death On The Nile and I hope he lightens up the mood a little. He is an excellent director and actor and these big old-style Hollywood films are always fun.