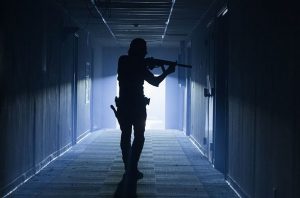 The war continues. It seems the first four episodes will take place over the course of the same day as battles take place in various locations. Pretty interesting though it was a little confusing at first. Since they never made it clear what the plan was in the first episode you just have to figure it out on your own. Each team was leading an assault on different Savior outposts. Aaron attacked one from the front while Rick and Daryl took the back. Jesus, Tara and Morgan attacked a 2nd and King Ezekiel and Carol a third. You can see the themes of wrath or mercy popping up all over the place as well as the consequences of all out war. The body count has gone up immensely after two episodes and I don’t see any let up anytime soon.

THE KING AND CAROL 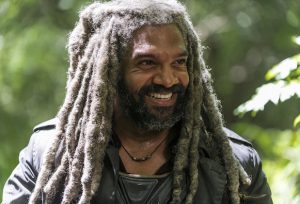 “Fake it till you make it, baby” King Ezekiel

During a skirmish with walkers streaming out of an Urgent Care facility, a Savior escapes! King Ezekiel and Carol and their merry band take after him. King Zeke is extremely positive and self-assured which concerns Carol but soon enough she lets out an ever so small smile and starts buying into his hopefulness. I think Zeke is crushing on Carol. Sheva eventually comes along and finds the Savior they were looking for and mauling him to bits.

Jesus and Tara lead an assault on the same outpost that they attacked during Season 6. This brings back bad memories for Tara. They encounter strong resistance but eventually take control of the outpost. They have a serious difference of opinion when they come across a guy hiding in a closet who has pissed himself. Jesus shows mercy but Tara would rather kill him. Of course, the guy was just putting on an act and takes Jesus by surprise. Jesus manages to get the upper hand but he won’t allow Tara to kill the man. He knocks him out and ties him up instead. When they encounter the last group of resisting Saviors Jesus asks them to put down their weapons and surrender which they do. This also doesn’t sit well with Tara. “Maggie may side with you but Rick will agree with me” she tells Jesus. Morgan also doesn’t see the point of taking prisoners.
MORGAN 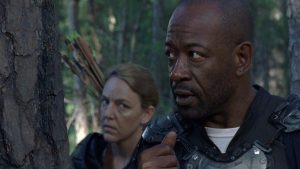 Morgan is worrying me. He created a diversion at the fence and a bunch of walkers gathered where he was. He lingered a long time there. Then he told the guys with him “I don’t die”. As the actor, Lennie James, explained on talking Dead afterwards, he felt that that line was more like a curse. Morgan has survived while watching others die. He felt it was also a warning to his team that they’d better watch out because everyone dies around him. He ends up going on a killing spree inside the outpost which reminded me of how Morgan was before he met Eastman. He seems to be succumbing to his PSTD behavior now that he has started killing again.

When he emerges from the outpost he sees Jesus and Tara and the surrendering Saviors. He recognizes one as the Savior that killed his young protégé Benjamin. He walks right up to him and plans to shoot him but Jesus intervenes. “That’s not what we do” Jesus tells him. “Then what do we do?” Morgan responds.

I see Jesus’ point. Shooting people who have surrendered is execution. But taking prisoners doesn’t make sense either. Where will they keep them? How many prisoners do you take and how many guards will it take to control them? It’s the makings of trouble for sure. 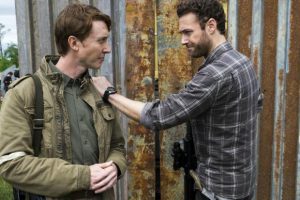 Aaron leads an assault on another Savior compound and this is the biggest firefight of the episode. Pretty exciting though The Savior group leader, Mara, seemed tough at the start later looked panicked when confronted by one of her own soldiers turning and biting her neck off. Eric performed heroically but perhaps too recklessly as he took a belly shot and was dragged off the battlefield by Aaron. We don’t see him die but come on, he needs to. I don’t say that because I don’t like Eric but there needs to be some casualties on the good guy side, right?
RICK AND DARYL 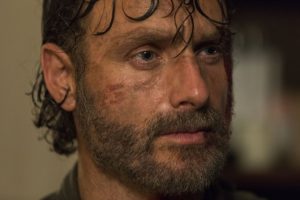 Rick and Daryl enter an outpost that Dwight said was an arms stash. They go floor to floor but don’t find any guns. Daryl runs across a room that reminds him of the cell he was kept in when he was a prisoner at the Sanctuary. Rick comes across a Savior that almost takes him out.  Rick sure loves to take a beating!  He gets the better of the savior and manages to kill him only to find out what he was so fiercely trying to protect; not guns but a little baby named Gracie.  Rick is shaken to the core by this discovery. The people they are out to kill are mirror images of their group.  They are trying to survive against a perceived threat and they have families and children too. A good moment in a hectic episode.

MORALES? IS THAT YOU? WHO ARE YOU AGAIN? 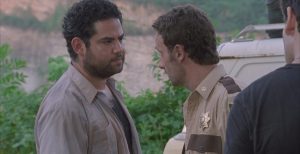 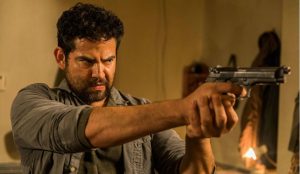 Rick continues looking for the guns and comes across another room and picks up a photo and seems to recognize someone in it. Just then, a gun gets pushed against the back of his head. He turns to see a familiar face. “Morales?” Yes! It’s Morales! The last we saw him was waaaaaaay back in Season 1,  Episode 4! After the attack at the camp, Morales takes his wife and kids and leaves the group. It seems he is now with Negan but what about his family? 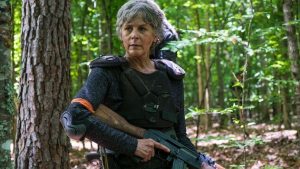 Most people don’t remember Morales and others who do aren’t really enthused about his return. I love it! I think it’s a great idea! Why not? Most characters are either still with us or have been killed. Very few have fates unknown. This is a wonderful way to get some insight into things that happened that we haven’t seen and perhaps into Negan and how things were at the beginning of The Saviors.

The episode was confusing. We needed better markers as to what was happening where.

How did Sheva know who to maul? That is one smart kitty kat!

I like Morgan in Terminator mode. But how long before he turns against his own team?