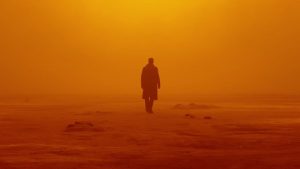 I saw the original Blade Runner in the theaters with my dad back in 1982. I was very excited because it starred Indiana Jones and Han Solo himself! Harrison Ford! The poster was great! I was excited to see it, thinking it would be a sci-fi action film. I was disappointed. It was slow and didn’t have a lot of action. Harrison Ford was not a hero! Well, I was a punk kid, what did I know? 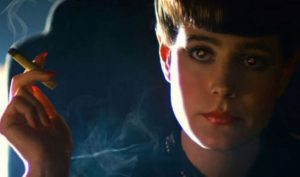 When the director’s cut came out in 1992 I went and saw it and had a completely different reaction. I loved it. The removal of the narration left the beautiful visuals and that amazing Vangelis score to transport you to that world. I loved the noir overtones and the homage to Bogart and the noir films of the 40s. It was amazing and became one of my favorite films.

Now, 35 years later, they dared to make a sequel. Something I never thought would happen. Harrison Ford hated making the first film, there was no way he would agree to be in a sequel. Perhaps once Ridley Scott backed out from the directing chores, Ford was more amenable to return. I have to think that when director Denis Villenueve signed on as well as the original screenwriter, Hampton Fancher, Ford was more enthused. I was enthused as well. Villenueve has a strong visual sense and I very much enjoyed his previous films, Prisoners (2013), Sicario (2015) and Arrival (2016). 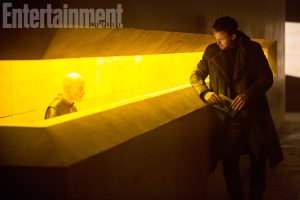 Blade Runner 2049 explores some of the same themes as the original; what does it mean to be human? Is it right or moral to play around with nature? What kind of world are we creating for ourselves? The search for identity. Ryan Gosling is K, a new and improved replicant who is also a Blade Runner. He hunts his own. The new breed of replicants being made by The Wallace Corporation and its leader, Niander Wallace (Jared Leto) are more docile and made to obey. They have been incorporated into society as slaves and servants but there is a fear of a rebellion brewing.
K is sent on a mission by his boss, Lt. Joshi (Robin Wright) that leads him to discover the remains of a female replicant that appears to have given birth. The thought that a replicant could conceive and give birth is a dangerous one so Joshi tasks K with finding the offspring and killing it. This sends K on a journey of self-discovery as he plays detective to find the child. This of course will lead him to an encounter with the legendary Blade Runner, Rick Deckard.

The film is a visual feast. It’s simply beautiful. The great Roger Deakins did the photography and he will probably win that elusive Oscar next year. The sets and lighting are amazing especially the Las Vegas ruins. Ryan Gosling, even though playing a replicant, is very expressive and moving. Ford has little screen time but he is very good and has good chemistry with Gosling. I wish there was more of Deckard and of the two of them onscreen. The plot is intriguing with real film noir flare just as in the original. I don’t want to go into too much but there are three or four scenes which really transcended my imagination and expectations and wowed me. I will go into more detail under the ‘Spoiler Alert’ section of this review.

The performances are strong. Gosling and Ford lead the way. Jared Leto is fine as Niander Wallace, a blind evil genius. Robin Wright gets to play the tough boss who has a soft spot for our hero. Silvia Hoeks plays a badass replicant called Luv who serves as Wallace’s muscle. Anna de Armas is moving as K’s holographic lover Joi. Shout out to Lennie James! Morgan from The Walking Dead!

I really liked the film and as I said there are some scenes that were just mind blowing. But it’s too long. The first hour and half lags and it’s something that could have been fixed. I get it though. The film is so beautiful what do you cut? Still, there needed to be some trimming to get to that last third of the film sooner. All that said, it is definitely worth your time and effort to see this film on the big screen. I saw it on IMAX and I would recommend it. It’s an experience unlike any you will have in the movie theaters this year or for some time to come.

DON’T READ ANY FURTHER IF YOU HAVE NOT SEEN THE FILM!!!!!

OK. There were a few scenes that really wowed me!
1. The Three Way Love Scene. K’s holographic girlfriend, Joi, hires a human escort, Mariette (Mackenzie Davis) so that she could merge with her, enabling her to make love to K. It’s an intense scene. You see Joi’s and Mariette’s hands and arms caressing K as he seems overwhelmed by the experience. Their relationship is the only real relationship in the film. They make a sympathetic pair.

2. Las Vegas. The ruins of Las Vegas reminded me of the old classic The Time Machine (1960) Dir. George Pal. Rod Taylor walking around the ruins of civilization when he ventures into the future. Once K enters the hotel/casino there are many visual treats from the Frank Sinatra hologram to the nightclub with showgirl holograms and Elvis Presley and Marilyn Monroe hologram singing and dancing while K and Deckard circle each other and fight. Really cool!

3. Giant Joi on the Bridge. Joi is a product, for the lonely to have their own holographic girlfriend. The advertisement for the product is a giant Joi hologram which K encounters towards the end after he has lost his ‘Joi’ and ponders what to do next. It’s heartbreaking and tragic.

4. The Remains and Reincarnated Rachel. Wallace has captured Deckard and tries to get him to reveal where the child that he conceived with Rachel is. He reveals that he has Rachel’s skull, her remains. Then, he tries to entice Deckard’s cooperation by presenting him with a newly recreated Rachel. We get to see Sean Young! It’s eerie as hell. She addresses him and you can see all the emotion of sad years on Deckard’s face. He turns away from her. “She had green eyes”, he tells Wallace who then shoots the new Rachel through the head. Sean Young is listed in the credits so they obviously had her permission to use her image and I assume record the new dialogue.

5. Edward James Olmos. Great to see Olmos reprise his role even for just one scene. It was a nice touch.