BATTLE OF THE SEXES

I remember when this tennis match between Billie Jean King and Bobby Riggs aired in 1973. I was a little kid but I remember it was a big event. Watching this film reminds me just how big and how important it was. It was estimated that it was watched by 90 million people around the world. There was a lot of pressure on King and she put a lot on herself. If she lost to Riggs it could have set Women’s Right’s back and the struggle for equal pay and respect would have been a lot harder. 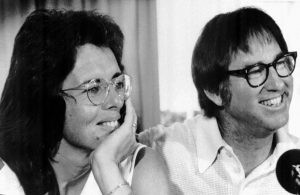 The film covers Billie Jean King’s fight for equal pay at tennis tournaments and headlining a women’s tennis tour in 72-73 which was sponsored by Virginia Slims cigarettes. She was married at the time to Larry King but was about to start a relationship with a young woman which would lead her to come out of the closet. Bobby Riggs was a champion tennis player in the 40s who felt he retired too early and was still looking to grab attention. He was a showman and a gambler. He was also a devout male chauvinist and had no problems sharing his degrading views to get attention. He claimed that women’s tennis was a joke and that at 55, he could beat the best that women had to offer. 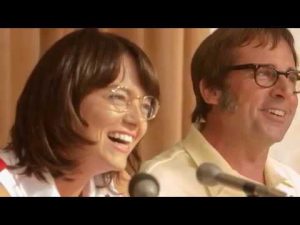 Emma Stone and Steve Carell are both terrific. Carell’s Bobby Riggs is a sad man who has another chance for the spotlight and he goes for it with PT Barnum ferocity. Stone shows us a Billie Jean King fed up with being paid less than her male counterparts and finding love with another woman, in the midst of all the media attention. Stone really creates a vivid character and one different than what we’ve come to expect from her. Stone and Carell previously starred in Crazy Stupid Love (2011) and just as in that film, they share very few scenes together but they make them sparkle. 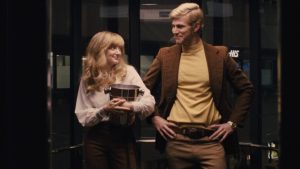 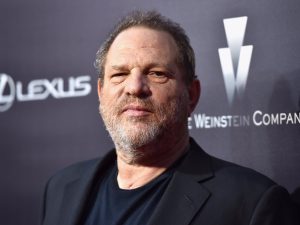 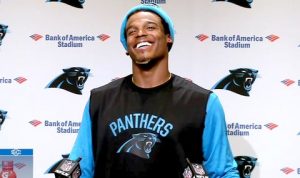 Directed by Jonathan Dayton and Valerie Faris (Little Miss Sunshine) and written by Simon Beaufoy (Slumdog Millionaire, Everest) Battle Of The Sexes is a small film with a big message. Women’s rights, equality and fair pay are still being fought for and these days the fight is just to hold on to the ground already won. In the same week as this film was released we saw the Cam Newton incident with the female sports writer and the expose on Harvey Weinstein in the New York Times which has led to his firing and a whole new round of discussion of how women are treated in the film industry. The Trump administration also announced that they are rolling back the health insurance mandate on birth control that will allow employers to deny this to their female employees on religious grounds. 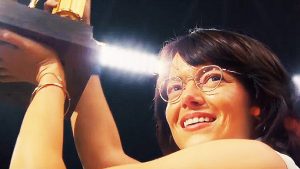 The film may seem like a dated story but it shouldn’t. We need as many Billie Jean Kings as we can get. The ‘Battle’ is not over.

Previous IT Next BLADE RUNNER 2049