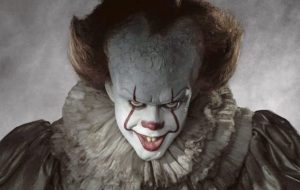 “Derry is not like any town I’ve been in before. People die or disappear, six times the national average. And that’s just grown-ups. Kids are worse. Way, way worse.” Ben 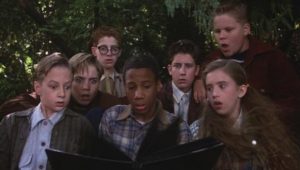 I remember seeing the 1990 miniseries on ABC back in the day and being really scared. Tim Curry as Pennywise was great. The kid actors were all really good and the adult versions were played by very popular TV stars (at the time) who were also really good. So, I have found memories of that version and still enjoy watching it when it’s on. The new film version looked to be scary as well, though, I wasn’t thrilled with how the new Pennywise looked. Still, I felt a strong desire to see it (though not alone!).

The new IT is directed by Andy Muschietti (Mama 2013) with a screenplay that credits Gary Dauberman (Annabelle, The Conjuring) and Cary Fukunaga (True Detective 1) based on Stephen King’s epic novel. The story most of you already know from the book and the TV film; An evil force in the town of Derry, Maine terrorizes and kidnaps children. The evil takes the shape of a disturbing clown calling himself Pennywise but it also appears in the form of what you fear most. A group of friends calling themselves “The Losers Club” because of their outsider status band together and decide to do battle with this evil. The leader of the group is Bill whose little brother Georgie is attacked and taken by Pennywise in the film’s eerie opening sequence. Bill is determined to find Georgie and eventually he convinces his friends to join him in his quest. There’s Richie played by Finn Wolfhard (Stranger Thing’s Mike!), the joke cracking smartass; Stan (Wyatt Oleff) the mild-mannered rabbi’s son preparing for his bar mitzvah; Eddie (Jack Dylan Grazer), the sickly mama’s boy who is on multiple medications. Ben (Jeremy Ray Taylor), the new kid in town who gets picked on because he’s overweight (Been there, pal!). Mike (Chosen Jacobs) an African-American kid who joins the gang when they come across him being assaulted by Henry Bowers (Nicholas Hamilton) the standard Stephen King bully! Last, but not least, we get the one female in the group, Beverly (Sophia Lillis), Bev, is the pretty red haired girl that they all have a crush on but is secretly being terrorized at home by her abusive father. 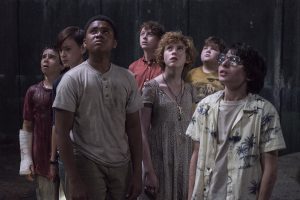 The young actors are all very good. The movie zips along and is very entertaining. The dialogue is natural and there’s plenty of humor spread out throughout the jolts and scares. The book deals with the Summer of 1958 when the kids battle the evil and then 27 years later when they return to Derry to battle the evil once more. This film only deals with the first part of the story and takes place in 1988.  It was fun to see all the retro references to new Kids On The Block! There were a lot of things I remembered from the TV film that are not in this version but those who have read the book probably said the same about the TV film. Pennywise is played by Bill Skarsgaard (Alexander’s brother and Stellan’s son!) he’s very good but I must confess I really liked Tim Curry’s Pennywise better. Maybe because I was younger when I saw the TV version but it scared me more. I’m sure the kids today will be plenty scared however. 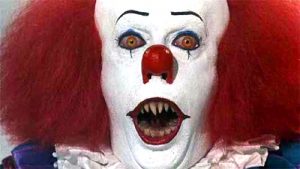 Taken on its own merits the new IT is a very good film. It’s scary but doesn’t get too gory (in my opinion) and the story is intact and sets up the sequel nicely. I’m interested to see who they cast to play the Loser’s Club as adults! Emma Stone as Bev? Joseph Gordon Levitt as Bill? Sterling K Brown as Mike? Ryan Gosling as Ben? Jim Parsons as Eddie? Chris Pine as Richie? Just thinking out loud.

Oh, if clowns frighten you I would advise against seeing IT. Just saying.

Previous MOTHER! Next BATTLE OF THE SEXES