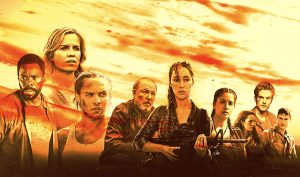 FTWD is back and it’s time to deal with the aftermath of Jeremiah Otto’s death not to mention the poisoning of the people at the ranch by Ofelia and Walker. How do you move past this and form a unified community?

BROKE JAW RANCH AND THE NATION 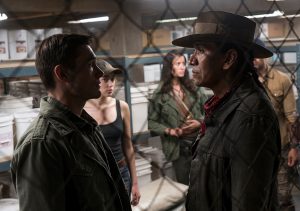 Walker and The Nation move in with Otto’s survivalists. They don’t like each other. This situation is doomed. Of course, it would make sense to band together, strength in numbers but too much has gone down between these two groups for them to ever trust each other. Madison and Nick tell a story of how Otto killed himself to end the war with The Nation in the hope that his people would survive but it’s a lie. Jake tries to honor the peace but he’s too weak from anthrax residue sickness to really be a factor. Alicia stands by her man and stands up to her mom, accusing her of standing with Walker against the others. Madison is trying to do what she thinks is best but it’s a lost cause. 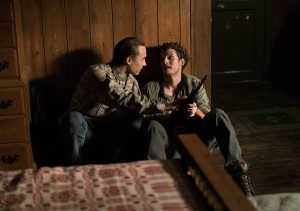 Troy will never accept this situation. When Walker decides that he needs to control the arsenal and comes to the house to search for weapons Troy fights back and Nick gets caught up in it. He stays with Troy to talk him down but Troy is intent on fighting even if it means his own death. The only thing that stops Troy is Nick telling him that he killed his father, it wasn’t suicide. Walker exiles Troy and after some pleading from Madison only puts Nick in the hot box.

Madison agrees to drive Troy out of the ranch at Troy’s request. Once they get far enough away Troy kills the one guard that went along and attacks Madison. She manages to get loose and pulls a gun on Troy and gets home to walk away into the wilderness. He’ll be back of course. 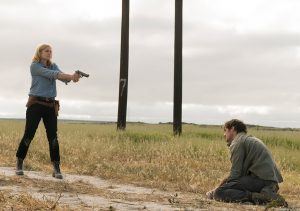 On top of these problems Madison discovers that the water source is running dry and they need to start rationing. This leads to Madison and Walker to head out to find more water leaving Alicia and Nick to hold down the fort while they’re gone. The survivalist look to Nick as a leader and Nick goes with it to keep the peace but soon he’s making plans to take over the camp.

Walker’s right hand man is Crazy Dog and while Walker is away he has run ins with Nick and Alicia over the water. The Otto-ites claiming the Indians are talking more of their share of the water and Ofelia and Crazy Dog seeing that the militia is reforming. They do not trust each other. Alicia tries to keep the peace but Nick starts siding more and more with the reformed militia.

DANIEL AND THE DAM 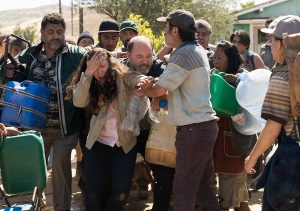 Lola is now free to take water to anyone who needs it. Daniel accompanies her with the water truck in hopes that he might find Ofelia out there one day. Lola understands but cautions him to let it go and move on. On one of their trips to dispense water the crowd turns on Lola, accusing her of hoarding the water. Someone throws a rock that hits her in the head. Daniel gets her out of there.

“A “safe market in unsafe times.” 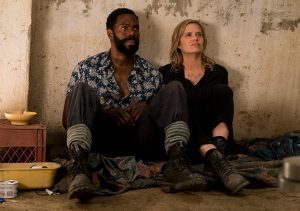 Madison and Walker find a ‘Barter Town’ type place and plan to exchange gold coins that Walker has in exchange of water. Just when they’re about to make a deal Madison spots Strand being accosted and steps in to help him. He’s in dent to the ‘proctors’ and he cannot leave until his debt is paid. Strand and Madison share a tender moment when he asks if she found Nick and if Alicia is alright. She tells him that both her kids are alive and safe and Strand can see in her face that Travis is not. He takes her in his arms to comfort her. They really share a special bond, respect and affection. When Walker turns him in to salvage their water deal, Strand is tethered to the wall surrounding the ‘Barter Town’ to fend off walkers and work off his debt. He survives until morning when Madison shows up to say that she’s paid his debt with Walker’s money. He tells Walker that Strand will help them get all the water they need at the dam. So off they go! Soon to be reunited with Daniel. 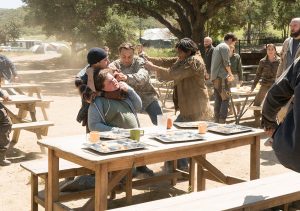 Meanwhile back at the ranch the Otto-ites and the Nation inch closer and closer to confrontation pitting Alicia against her brother Nick. Alicia finally tells them that they’re rationing because they will be out of water in 6 weeks. That’s when the panic begins and pits Nick against Ofelia and Crazy Dog. Nick and the remaining militia decide to act. Nick proposes they try to take the weapons and thereby avoid bloodshed but all they have are knives and bats. Alicia spots some of the indians using a divining rod to search for water and goes along with them. They pick a spot a start digging for water. Nick and his gang approach the house with the weapons that Ofelia and Crazy Dog are guarding. Nick sees Alicia and decides he’d rather help her and the indians dig for water than lead a suicide mission. Ofelia and Crazy Dog see this and decide the same thing. The final image is one of unity – all of them digging, working together to find a solution to their problem. 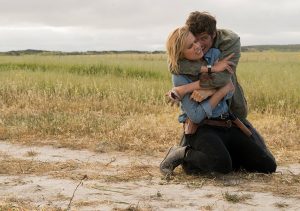 Why does Madison continue to protect Troy? Why won’t she just kill him? Instead she lets him go knowing full well he’ll come back and wreak havoc on them later on.

Who is Nick anymore? What is his story going to be going forward? I’m not sure yet from these two episodes. 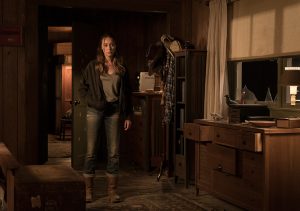 Alicia keeps getting stronger. She still feels like Madison favors Nick over her and she doesn’t trust her mother’s intentions any longer. I see a power struggle coming.

I’m glad Strand has reunited with Madison. They make a good team. We’re getting the band back together!

Now where is Luciana? Why must everyone always be separated on these shows!!