“You’re looking for clues, but you’re missing all the signs.”

Taylor Sheridan wrote the very dark film Sicario (2015) and the Best Picture Oscar nominated modern western noir film from last year Hell or High Water (2016). Wind River finds him directing his own script and it’s another tough, dark but beautiful one. It’s a crime thriller, a whodunit, a search for justice. But like in his other scripts, not even bringing wrong doers to justice brings peace or satisfaction. It’s a hard film. It’s also a very good film.

It’s a murder mystery but it’s where it’s set that sets it apart from other murder mysteries. The action takes place on an Indian reservation in Wyoming called Wind River. Cory Lambert (Jeremy Renner) is the US Fish and Wild Life agent called in to look into the death of a young woman found frozen in the snow. A single FBI agent is brought in to aid in the investigation, a rookie no less. Agent Jane Banner (Elizabeth Olsen) is sent to determine if a murder has taken place and that is not as easy as you would think. Lambert and Banner become an interesting team and together they piece together the crime but it comes at great cost. 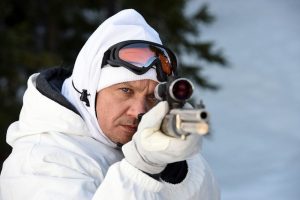 “Luck lives in the city. Luck don’t live out here. You understand?”

In a lesser film, these two would get romantically involved but not here. The film keeps its focus on the crime, who did it and why. That is not to say that these two characters don’t get to know and like each other. I also like that they don’t play up the ‘fish out of water’ theme with Banner like you might expect. There is some of that there of course, but again, this is not what the film is about.

“Out here you survive or you surrender.”

You do get to see Lambert’s ex-wife and son and the pain in that relationship. Lambert is also friends with the dead woman’s father, Martin, played nicely by Gil Birmingham. Birmingham was also in Hell Or High Water as Jeff Bridges’ Texas Ranger partner. Lambert understands what Martin is going through. He lost a daughter as well. Their daughters were childhood friends. The investigation takes many twists and turns and the reveal about what happened to the girl is shown in a flashback that is cleverly handled and feeds the film’s momentum without taking you out of what’s happening in the present. 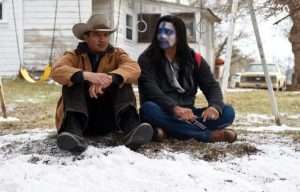 Jeremy Renner is fantastic. He really is a fine actor. He’s not just ‘Hawkeye’ folks! Interestingly enough, Elizabeth Olsen is also an ‘Avenger’! She works alongside Renner in the Avenger films as ‘The Scarlet Witch’. Wind River gives both of these fine actors room to create deep, rich, characters and they play off of each other really well.

The performances are low key and strong. Some nice performances by Graham Green as a local reservation cop who delivers some nice comic relief and Jon Bernthal who also had a small part in Sicario. This is very good story telling, no hyped up action sequences. It is very much like Hell Or High Water, understated but powerful.