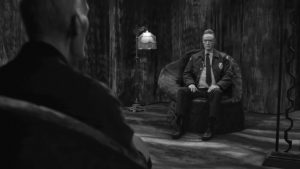 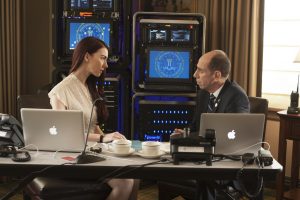 “Tammy, case #1”
2 women fighting in a hotel room
1 shoots the other
“I’m like the blue rose”
She smiles, dies and disappears before their eyes
The other woman seemed to be a twin
claims she didn’t kill anyone
The two arresting officers were Cole and Jeffries
The second woman was conjured 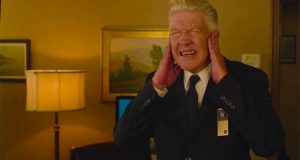 “Coffee time!”
Window washer appears
the squeezing on the glass
annoys Gordon, has to turn down his hearing aid
Diane arrives
Did Cooper mention major Briggs the last time she saw him?
“Yes”
Thought he died 25 years ago but didn’t
died a few days ago
a ring found in his stomach
“To Dougie with love, Janie E”
Diane gasps!
Dougie’s wife is Diane’s sister!
“We’re estranged. I hate her.”
The Vegas connection is made
Cole calls Vegas PD
He asks for all info on Douglas Jones and his wife
“This is what we do in the FBI!!!! 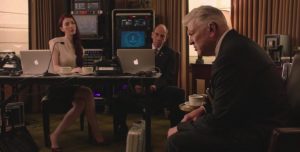 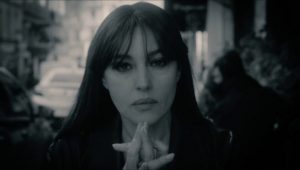 “We’re like the dreamer who dreams and then lives inside the dream”
“But who is the dreamer?”
Gordon looks behind him and sees himself as a younger man
We see a scene from Fire Walk With Me as a flashback 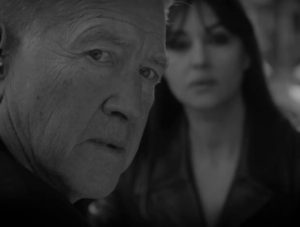 Cooper had a dream
It’s 10:10 am on February 16th
David Bowie as Agent Jeffries
He points at Cooper
“Who do you think that is there?” 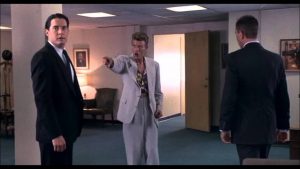 Truman, Hawk, Andy and Bobby arrest Chad
“There’s your roast beef and cheese”
Then they head up the mountain
Bobby leads him to the spot
his dad wrote in his message
“Jack Rabbits Palace” 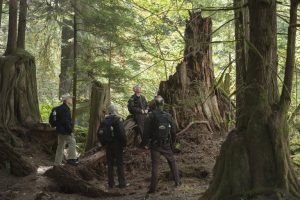 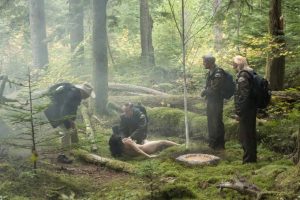 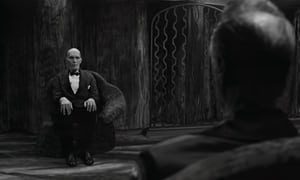 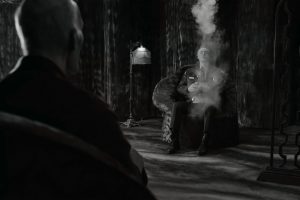 Andy looks up through a window
He sees a shaking figure
he sees the events of episode 8
the smoking man
“Gotta light?”
The red curtains
Laura palmer with angels beside her
the no eyed woman they just saw
the two Coopers
a phone, blinking light
himself and Lucy
the no eyed woman
a telephone pole and the number 6
the smoke goes back into the bottle
in Andy’s lap
Truman, Bobby and Hawk are back at Jack Rabbit Palace 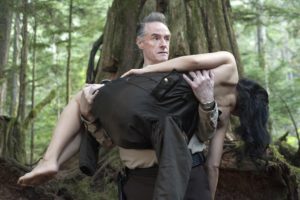 Andy walks up carrying the no eyed woman
“We have to get her down the mountain. She’s very important and people want her dead. We have to put her in a cell where she’ll be safe. Don’t tell anyone about this.”
Truman and Hawk don’t remember what happened 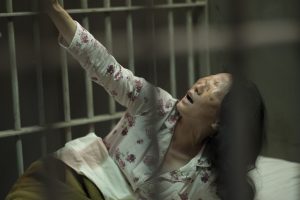 Lucy gets the no eyed woman some clothes
Chad is another cell
And a horribly beaten man is in another
Porpoise sounds come from the no eyed lady
the beaten man starts making the same sounds
Chad yells at them to shut up
The beaten man seems odd
who is he?
is he like the cigarette man? 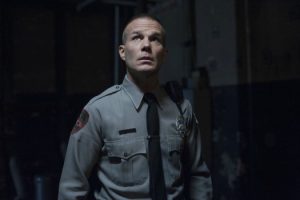 The Great Northern
Looks like James works as security
“We’ve got one more delivery and then hit the Road Hose”
“You want to see if Renee will be there. but she’s married”
“I remember when I was 23”
James’ partner, Freddie has a black glove on his right hand
He can’t take it off or it will start bleeding

He tells a crazy story

Apparently he visited the Giant, too

“This bloke’s there. A fireman is what he called himself” 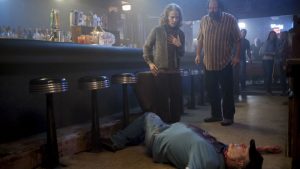 Elk’s Point #9 Bar
Sarah Palmer
She orders a bloody mary
guy in a baseball cap at the end of the bar
t shirt says “Truck You”
He makes a move on her
Bad mistake
She tells him to go back to where he was sitting
he turns ugly
starts calling her names
she says she’ll eat him
she stands and removes her face
Whaaaaaaaaa?
Then she bits his neck off
he falls dead, bleeding out

The Bang Bang Bar
Two women in a booth
I can’t keep track of these women
Have we seen them before?
“Have you seen Billy?”
Is this Tina?
Audrey’s Billy
Billy and Tina’s mom had a thing
Oh this girl’s mom is Tina
He showed up bloody and yelling
and then he took off again
who is this girl’s uncle?

Previous GAME OF THRONES RECAP: S7EP6 BEYOND THE WALL Next DUNKIRK