GAME OF THRONES RECAP: S7EP6 BEYOND THE WALL 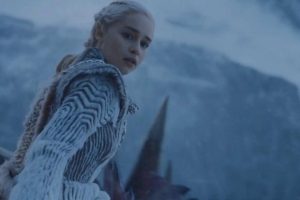 Well, hell. Now what? This was a very unusual episode but it stayed very concentrated on three story lines:

Sansa and Arya / The Magnificent 7  / Daenerys and Tyrion.

I’ll be very honest. Arya scared the hell out of me tonight. She’s obviously the show’s version of Lady Stoneheart and that makes me worry for Sansa. Meanwhile, I just don’t get Tyrion these days. He doesn’t seem to be getting anything right. He comes up with the lame brained idea to go and fetch a dead person to bring back to King’s Landing and then tells Dany not to help and that they knew what they were getting into when they went on the mission. Not his best season. 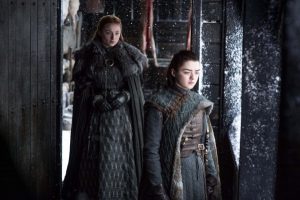 Arya confronted Sansa about the raven mail she was forced to write and sent back in season one. I was hoping Arya was smarter than this but she doesn’t care if Sansa was young or forced. She should have died before agreeing to write it according to Arya. You can see all the sibling jealousies coming out here. Arya saw Sansa on the dais when Ned was beheaded. She was in her pretty dress and fancy hair. has Arya really put Sansa on her list?

Sansa meets with Little Finger and asks where Arya got the raven mail. Of course, Little Finger said he didn’t know. Sansa is worried that the letter will get out and their allies would desert them. Little Finger suggests that she seek Brienne’s help. He’s trying to pit Brienne and Arya against each other. 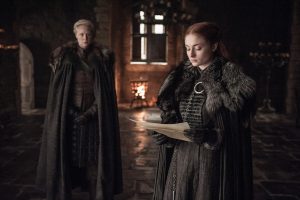 When raven mail arrives from King’s Landing asking that Sansa come down for a little pow wow Sansa tells Brienne to go and represent her. At first I thought Sansa was acting strangely. Of course she doesn’t want to head South and be in the presence of Cersei but it felt off. Then I realized that she was playing a deeper game. She knows Little Finger. She knows he is trying to pit Brienne against Arya and so she decides to remove Brienne from the situation.

Sansa has a look in Arya’s room trying to find the raven mail. Instead she finds a bag full of faces. Arya suddenly appears. Awkward. Arya was chilling in this scene.

“I have hundreds of men at Winterfell all loyal to me.” Sansa says.
“They’re not here now.” Arya points out.

Sansa is freaked out about the faces but when area grabs her new dagger and walks towards her and says:

“I could even become you. I wonder what it would feel like to wear those pretty dresses, to be the lady of Winterfell. All I would need to find out is your face.”

Yikes! She then hands Sansa the dagger and walks out of the room. What the hell!!!!! Just talk to Bran! He will explain it all to you! But Bran is probably sitting in front of that tree again! 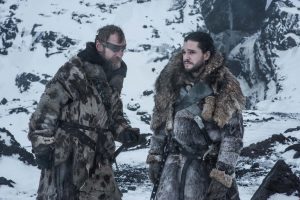 There were some great moments with the boys as they stomped through the snow. Tormund and The Hound had a wonderful exchange that led to the topic of Brienne.

“You’re with Brienne of fucking Tarth?” The Hound
“Not yet but I see the way she looks at me” Tormund
“Like she wants to carve you up and eat your liver? The Hound
“You DO know her” Tormund beams and smiles.

Jon, of course, being Jon, offered to give Ser Jorah his father’s sword, Longclaw. But Ser Jorah told him to keep it and hand it down to his children. But are children in Jon’s future?

Berrick and Jon had a nice conversation about why the Lord of Light wants from them, seeing as they both have died and been brought back to life.

“We’re here to protect those who can’t help themselves” Berrick says.
“I am the shield that guards the realms of men.” Jon says.

They agree that perhaps that is enough of a reason to still be alive.

Even Gendry made up with Thoros and Berrick! 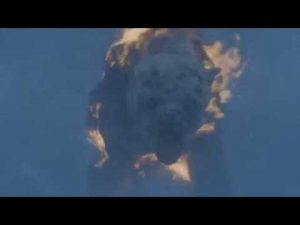 The first test comes in the shape of an undead bear. The bear takes out some ‘red shirts’ and takes a chunk out of Thoros. Berrick cauterizes his wounds with his flaming sword. Luckily enough, they come across a small band of undead led by w White Walker. They attack and when Jon kills the White Walker all but one of the wights also disintegrate. It’s explained that perhaps that when a White Walker is killed so are all of those wights he created. So by killing The Night’s King himself all the others would die. 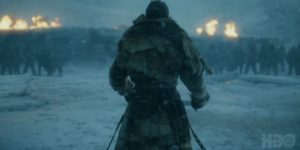 The gang starts to tie up the wight when the rest of the undead army descends upon them. Jon sends Gendry back to Eastwatch to send a raven to Daenerys for help. The rest of them run for their lives across a frozen lake and stand on a rock island while being surrounded by the dead. 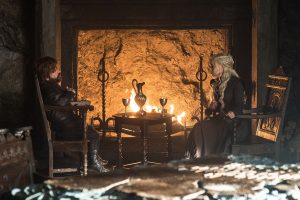 Daenerys and Tyrion have a fireside chat to discuss strategy. Tyrion teases her that Jon is in love with her. She of course poo poos the idea. Then they discuss the armistice agreement with Cersei. Cersei will have something up her sleeve but do they? They end up getting in a heated argument. Dany doesn’t think much of her Hand’s advice of late and I don’t blame her. But when he starts bringing up who should succeed her he hits a sore subject. She can no longer have children, you see. 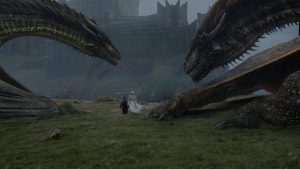 When Dany decides to ride North with her dragons to help the boys Tyrion protests. “Sometimes the hardest thing to do is nothing” he tells her. But he told her to do nothing before and she believes it was a mistake so off she goes with her ‘children’ to save the day! 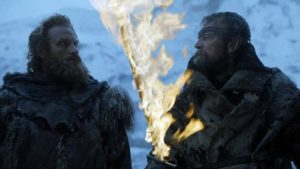 Thoros dies and they burn his body. Then The Hound got bored and started throwing rocks at the wights, knocking the jaw off of one of them. He throws another one but this one doesn’t hit. The jawless wight took offense however, and starts walking across the lake. The rest start to follow. “Oh fuck” The Hound says. Yup! The group ends up fighting for their lives. I thought for sure Tormund was done for and I started the grieving process but at the last second The Hound was able to save him. Awwww! Those big lugs love each other! Just when Jorah gave his goodbye look to Jon a stream of fire shot over them! Dany and her dragons obliterated hundreds of those wights! 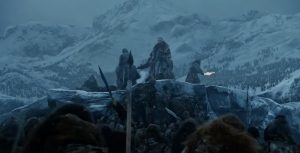 Dany reached down to pick up Jon but he decides to fight of the wights so the rest of the gang could board the dragon with their hostage. So Jon! Then The Night’s King, ever so calmly, takes a spear and throws it at one of the dragons and brings it crashing down! Holy crap! He killed a dragon! It sinks into the frozen lake. Jon sees that he has grabbed another spear and tells Dany to take off. She does but looks back longingly as she sees Jon attacked by wights and fall into the lake. 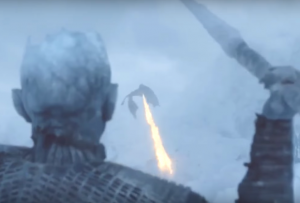 Of course Jon isn’t dead. He climbs out of the lake and grabs Longclaw which was conveniently nearby. Hundreds of wights start towards him but out of nowhere Uncle Benjen rides in, puts Jon on his horse and sends him off! Benjen gets overtaken by wights and dies. 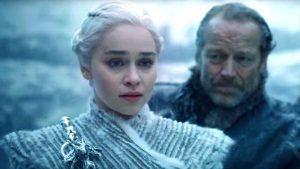 Back at Eastwatch Dany waits with Jorah hoping for a miracle. And she gets it! Jon comes riding through the snow. He’s alive. When she comes to his quarters she sees his naked torso and all the scars. Now she knows. She may be the breaker of chains and the mother of dragons but has she ever come back from the dead? She’s there when Jon wakes up. He calls her Dany but that brings back memories of her brother. “How about my queen?” Jon says. He assures her that the Northerners will agree with his decision once they get to know her. “I hope I deserve it” She says, teary eyed. “You do” he assures her. This is the most vulnerable I’ve seen Daenerys in years! They hold each other’s hand and when she starts to pull away and he doesn’t let go you can see the jolt it sends through her. But what happens when she finds out Jon is her nephew! Will it matter? Does it matter?

But the last scene of hundreds of wights pulling the dragon out of the frozen lake! I think we all saw this coming right? The Night’s King touches the dragon and it opens its eyes. Those big, beautiful blues! Will The Knight’s King ride the dragon? Probably. Why not? And now we got a fight!

I would be remiss if I didn’t at least mention Daenerys’ beautiful Winter attire. Sansa will be soooo jealous! 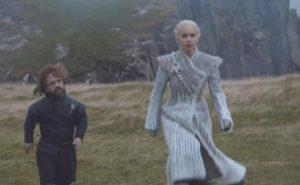 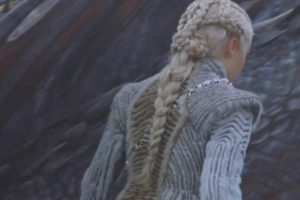 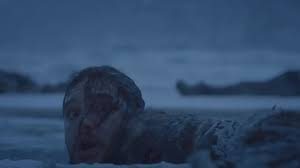 Why didn’t Jon bring dragon glass with them on their suicide mission?
How did Gendry get back to Eastwatch so fast?
How fast is a dragon?

Is Tyrion planning on switching sides? Is it possible? Every plan he’s come up with this year has been terrible.

I still am hoping that Arya is onto Little Finger’s plan. She cannot kill Sansa! I won’t have it!

The Hound is going to see his brother The Knight formerly known as The Mountain. Will we finally see Clegane Bowl? I hope so!

Cersei and Qyburn will have something diabolical planned. I would eat or drink anything at that meeting everyone is going to.

“Death is the enemy. The first enemy and the last. The enemy always wins but we still have to fight it.” Berrick Donderrion

“What are you whinging about?” The Hound to Gendry 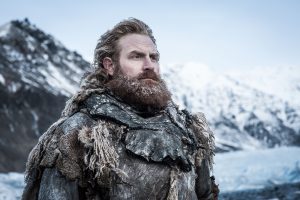 “Everyone I’ve ever met has been a cunt. Why should the Lord of Light be any different?” The Hound

“If they found out that I wrote that letter, a woman who’s not only married on but two enemies of their house” Sansa

“I don’t give two shits about wildlings. It’s gingers I hate.” The Hound
“Gingers are beautiful. We are kissed by fire. Just like you.” Tormund

“You should be on your knees thanking me!” Sansa 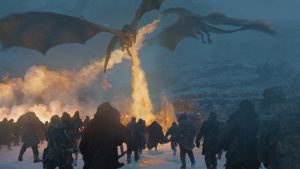 1 Cersei is planning a surprise attack at the truce meeting
2 Sam and Gilly arrive at Winterfell and together with Bran they tell Jon who he is.
3 Yara is dead
4 Arya will kill Little Finger
5 Arya will add Little Finger’s face to her collection