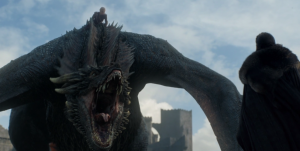 This is the set up episode for what’s coming. Cersei vs Daenerys. Arya vs Little Finger. Jon and his all star unit of misfits vs The Dead. How can there only be two episodes left! 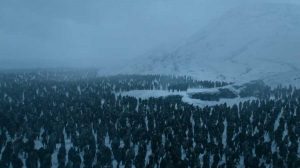 Bran wargs into a raven and sees the Night’s King and his army of wights marching. He orders ravens be sent to warn the realm. There is no way that this army can be stopped without dragons!

Of course Bronn drags Jamie out of the river a ways down from where the survivors of the Loot Train Attack are assembling in front of Dany and Drogon. I love Bronn! He tells Jamie “You’re fucked!” This is where their partnership ends! He draws the lines at Dragons! They’re both lucky to be alive! 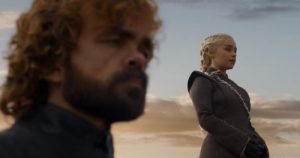 Dany tells the survivors to ‘bend the knee’ die, her usual schpiel. Tyrion is clearly not okay with all of this. He is very disturbed by the devastation of the attack. Lord Tarly and his son, Dickon refuse. Tyrion tries to convince Dany to lock them in a dungeon for awhile and they’ll come around but Dany sticks to her guns. 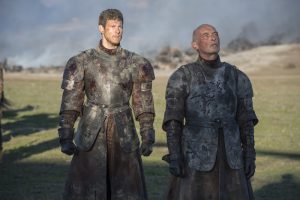 They hold hands while Drogon reduces them to ash. Then Drogon turned to the others and roars. The went to their knees alright 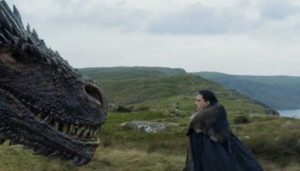 Dany and Drogon land on the beach right in front of a pondering Jon. Drogon roars but Jon stands his ground. Then Jon reached out his hand and Drogon lowered his head and allowed Jon to pet him. Wow! The special effects have been amazing this season. That dragon looks real to me! Dany of course was clearly surprised to see this. But Drogon just said, “Look, mom! It’s Uncle Jon!” 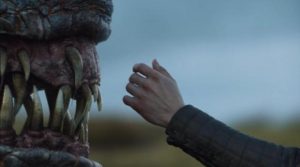 Dany asked Jon again about being stabbed in the heart but Jon won’t tell her. He’s a humble guy! Then we get another great reunion! “This man says he is your friend”. Ser Jorah appears from behind a group of Dothrakis. Dany’s face light up! “He is my friend”
They embrace. But their time together will be short lived. 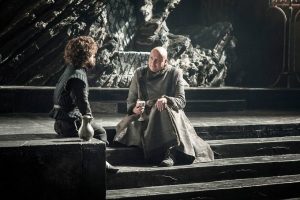 Varys and Tyrion have a little chat. They’re concerned about Dany. Tyrion sees that Varys is holding some Raven mail.
“Have you read it?” Tyrion asks.
“It’s a private message for the King of the North!” Varys says.
“What does it say” Tyrion presses.
“Nothing good” 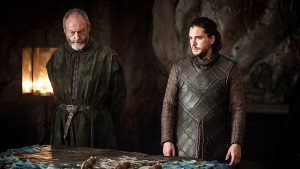 So Jon tells the group that he’s learned that his brother Bran and sister Arya are alive! Also that Bran has seen The Night King and the Dead approaching Eastwatch. No one seems to question how Bran saw this, not even Jon. We just go with it. He tells Dany that he has to go. Dany won’t help because as soon as she leaves Cersei would swoop in and take control. Tyrion comes up with the crazy idea to capture a wight and bring it to Kings landing to convince Cersei that the Dead are real and a threat that they all have to unite and confront. Ser Jorah volunteers to go and bring one back. But you just got here! But the free folk won’t follow Ser Jorah. Jon will have to go. Davos doesn’t like it. Jorah doesn’t like the look of concern on Dany’s face. She doesn’t want Jon to go. “I haven’t given you permission to leave” But Jon tells her he doesn’t need it. He’s a king. He trusted her by coming to meet her and she needs to trust him by letting him leave. 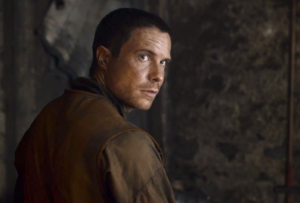 Ser Davos smuggles Tyrion into King’s landing so he can meet with Jamie and tell them their plan. They’ll need Jamie’s help to convince Cersei to meet with them in good faith once they have the wight. Ser Davos finds Gendry still working as a blacksmith.

“I thought you’d still be rowing”

Gendry immediately agrees to go with him. He’s not good with a sword but he has made one helluva big hammer! The hammer, after all is the Baratheon family weapon of choice.

Bronn leads Jamie into the dragon fossil museum to meet with Tyrion. Too bad we couldn’t see Tyrion and Bronn’s reunion. Jamie seemed pretty pissed but he listened and when he goes to see Cersei with it she seems to agree that making a deal with Dany may be strategically smart. She also lets Jamie know that she knew that Bronn set up the meeting with Tyrion. 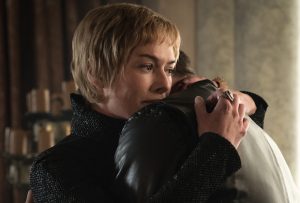 “Dead men, dragons and dragon queens. Whatever stands in our way we will defeat it.” she tells Jamie.

Plus Qyburn has just told her that she is pregnant and they won’t hide the fact that Jamie is the father. But as they embrace she tells him “never betray me again”. Chills. 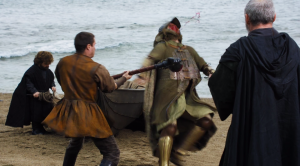 Back at the beach Tyrion, Davos and Gendry run into some trouble with a couple of sentries. Seeing as Davos is not much of a fighter it was left to Gendry to wield his giant hammer! Hope that thing works as well on the dead as it did on the living. 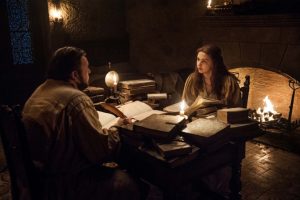 “What does annulment mean?” Gilly

The maesters get the raven mail warning about the army of the dead but they don’t take it seriously and Sam can’t convince them.

But Gilly makes a huge discovery and Sam doesn’t even hear it! Did you? She discovers that Prince Rhaegar had his marriage annulled and was secretly married in Dorne! If this is true then Jon Snow is not a bastard and actually the rightful heir to the throne!

Sam has had it with the Citadel and steals some books and scrolls and takes off with Gilly and Little Sam. My guess is they’re headed to Winterfell. 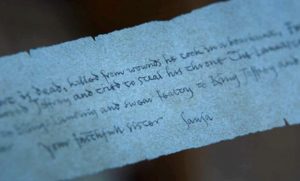 “You always liked nice things. It made you feel better than everyone.” Arya

The lords get word that Jon is headed to Eastwatch and starting to regret giving allegiance to him instead of Sansa. Sansa stands by Jon and says that he’s their king and he’s doing what he thinks is right. But Arya did not like them bad mouthing Jon and is miffed at Sansa for allowing it. She also doesn’t like that Sansa has made their parents bedroom her own.
“And if Jon doesn’t get back you’ll need their support so you can work together to get what you want”
“How can you even think such a horrible thing?
“You’re thinking it right now”

They had a sibling rivalry when they were kids and those feelings are still there. Only they’re not kids anymore. The stakes couldn’t be higher. 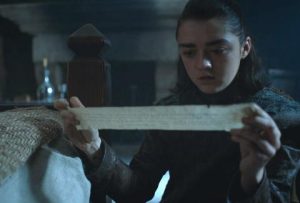 Little Finger is doing what he does best: Scheming. He saw Sansa’s reaction when they watched Arya fight Brienne. He sees an opening. Arya does some spying on Little Finger and sees that he receives some raven mail, overhears him saying that lady Sansa is most grateful for it. She sneaks into his room and finds it. It is the message that Cersei forced Sansa to write back in season one, saying that her father had committed treason and asking Robb to come to Kings Landing and pledge allegiance to Joffrey. As she leaves his room we see that he sees her leave and planned for her to see that message, hoping to divide sister against sister. But I have to believe that Arya is aware of this. She has to be! She must have had discussions with Bran about what he knows about Little Finger. 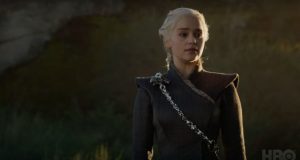 Ser Davos brings Gendry to meet Jon. He tells him to not say who he really is and the plan was that he would go to Winterfell to work the forges. Davos seems to look at Gendry as an adopted son. So when Gendry immediately tells Jon that he’s Robert Baratheon’s bastard son Davos is stunned. But Jon takes an immediate liking to him.
“I grew up on stories about them” Jon tells him.
“All I know is that they fought together and won” Gendry says.
Gendry convinces Jon to take him to Eastwatch to help.

On the beach Tyrion and Jorah share a nice moment. Tyrion gives him the coin that the salvers gave him when he talked him out of killing them. “Bring it back. Our queen needs you” he tells Jorah. 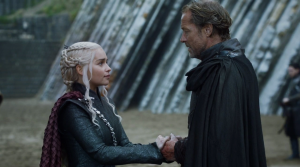 Then we get a touching moment between Jorah and Dany. He starts to speak but she takes his hands. He leans down and kisses them.

Then we get the farewell between Dany and Jon. Jorah sees it. Tyrion sees it. We see it. The look on her face. She’s smitten. Jon not so much. At least he’s now showing it. He’s only got one thing on his mind: White Walkers.

“I wish you good fortune in the wars to come, your grace” Jon tells her. We’ve heard this line before. Mance Rayder, Ser Arthur Dayne and Benjen Stark have all said the same thing. They’re all dead. Well, Benjen is one of the good ‘dead’ ones. 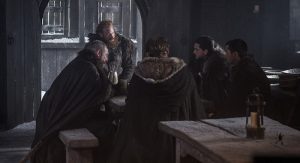 “Here we all are, at the edge of the world, at the same moment, all headed in the same direction for the same reason” Berrick Donderrion

Tormund cannot believe that Jon wants to go back out beyond the Wall. He hoped that Jon has brought ‘the big woman’ to help. Wishful thinking, Tormund. He takes them to the cells where some other crazy men are being held. They also wish to go beyond the Wall. It’s The Hound, Berrick Donderrion and Thoros.

This is a motley group! And they all hate each other for various reasons. Berrick and Thoros sold Gendry to Melisandre. Jorah’s father hunted Tormund and his people. And of course, The Hound was hated by all of them. But they have to unite. They have a common enemy.

“We’re all on the same side. We’re all breathing.” Jon says.

What a great moment when the gate is raised and we see The Hateful 7! The Suicide Squad! The Dirty Seven! Classic! They all march out into the blizzard to bring back a wight. Not all of them will be coming back though. Who will die? Who will return? 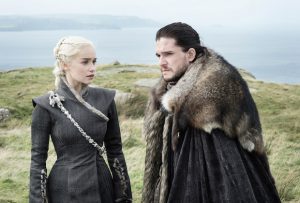 Jorah sees that Dany likes Jon. Poor Jorah! What does he have to do to win her love? Die?

Cersei is pregnant? What if Qyburn did something to help this happen? What will that baby look like when it’s born? We all saw what happened to The Mountain! I’m a little nervous about this.

Jon went straight to Eastwatch so we have to wait to see his reunion with Arya and Bran. But why was he so quick to believe that Bran saw the Night King? When did he find out that Bran was a ‘warg’? Why didn’t anyone else question this piece of information?

Of the 7 men that ventured North of the Wall who will not be coming back? I can’t believe that Jon, Jorah or Gendry will die. I think The Hound will make it. I’m betting the other three will not. How will Brienne take the news if Tormund doesn’t make it back? I bet she’ll grieve.

Can’t wait to see the biggest reunion of all! Jon and The Night’s King 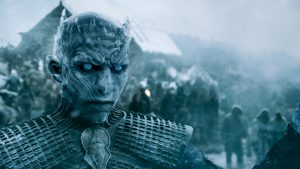 “Nothing fucks you harder than time” Ser Davos (My personal favorite)

“It’s better to be a coward for a minute than dead for the rest of your life”
Ser Davos.

“You need to convince the one with the dragons or the one who fucks her brother?” Tormund

“For fucks, sake! Will you shut your hole! Are we coming with you or not?”
The Hound 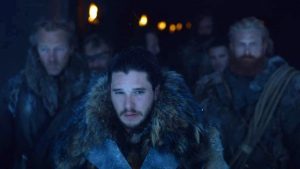 1 Arya will out fox Little Finger
2 Little Finger is on her list
3 I think we will see Jaqen H’ghar again
4 Bran will warg into ‘someone’ to save Jon
5 We will see Ghost in the season finale! (We Better!)

Previous Is Daenerys Stormborn The Right Person to Rule The Seven Kingdoms? Next TWIN PEAKS THE RETURN Recap: EPISODE 12