Is Daenerys Stormborn The Right Person to Rule The Seven Kingdoms? 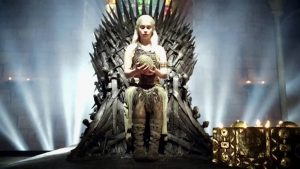 I’m still thinking about last Sunday’s episode of Game Of Thrones and that fantastic battle. Well, it wasn’t really a battle, was it? It was dubbed ‘The Loot Train Attack’ for a reason. It was a massacre. What infantry could have put up a fight against an attack by horse let alone Dragon? The Lannisters didn’t have a chance. Daenerys listened to Jon Snow and Tyrion Lannister about not attacking a city with her dragons but she needed a victory and she got one. But as Jamie said to lady Olenna before handing her a glass of poison, “There are always lessons in failures”.

If Jamie survived the plunge onto the water what will he have learned from this? He’ll have seen what a dragon can do, for one. He’ll know that Qyburn’s Scorpion works and that a dragon can be wounded, for another. He’ll learn that you cannot beat Daenerys with an infantry, old school style on the battlefield. If he doesn’t learn these things rest assured that Cersei will.

I was also very intrigued by Tyrion’s reaction to watching his brother and fellow Lannisters be absolutely wiped out before his eyes. “Your people can’t fight.” One of the Dothraki told Tyrion. It was a pretty callous and arrogant thing to say considering they had horses and dragons on their side. I have to imagine that Tyrion had mixed feelings about what he witnessed and that this will carry over into episode 5. We see in the preview that there will be survivors/prisoners and Dany will demand they ‘bend the knee’ or die. Are they to be slaves? She doesn’t believe in them. Are they to be incorporate into the Dothraki army? Fat chance! They may bend the knee but is that what she wants the inhabitants of the seven kingdoms to do? Bend the knee and quake in fear? Davos and Jon had an interesting conversation with Missandei about whether she considered herself free. She believes if she wished to leave tomorrow that Dany would give her a ship and wish her well. Would she?

This brings me to who would be the best person to rule the seven kingdoms. Increasingly I am not seeing Daenerys as the best choice. She has dragons and she could very well burn down the Red Keep and all of King’s Landing and win but win what? As it is now, entire houses are being wiped out by either the war or Arya Stark. In the Stark crypt Arya laments that someone who knew their father should have carved his statue. Sansa tells her that everyone who knew their father is dead. Yes. And many more will be dead soon. Who will be left to rule?

I’m not sure I would go so far as to say that Daenerys is the epitome of ‘white privilege’ but she’s close. She believes she should be queen simply by the virtue of having the name ‘Targaryen’. There are no slaves to free in Westeros. Only people to conquer. She was not a good ruler in Essos. What makes us think she would be a good queen? I think Tyrion may start having his doubts. Jon Snow meanwhile is not interested in ruling Westeros only saving the people of Westeros. Unless Daenerys starts thinking the same she may turn out to be a villain and not the hero in this Game of Thrones.