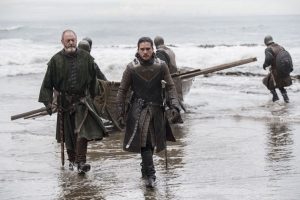 Well it finally happened! Jon Snow and Daenerys meet! Wait until they find out they’re related! Great fun to see Tyrion and Jon together again as well.  Time is running out. Who will make the right decisions? Who’s judgment will prevail?

“I was born to rule the seven kingdoms, and I will.” Daenerys
“You’ll be ruling over a graveyard if we don’t defeat the night king.” Jon Snow

Jon and Davos arrive and Missandei and Tyrion greet them on the beach. They have their weapons taken and their ship seized.

Jon and Tyrion greet each other as old friends.
“You’ve picked up some scars along the road” Jon tells him.
“It’s been a long road but we’re still here.” Tyrion says. 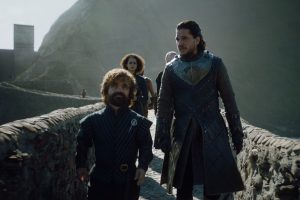 As they make the long walk up to the castle Tyrion asks is Sansa is well. He tells Jon that theirs was a sham wedding and it was never consummated.

“She’s much smarter than she lets on.” Tyrion tells Jon.
“She’s starting to let on” Jon replies. Then all of a sudden they get buzzed by a dragon! They all duck for cover. The look on Jon’s face is priceless. He’s seen a lot in his day but never a dragon!

Off on a mountain top, Varys and Melisandre have a conversation. He wonders why she won’t be there to see Dany meets Jon.

“I’ve done my part. I’ve brought Ice and Fire together.” She tells him.

She tells him that she’s leaving and he advises her to never return to Westeros. 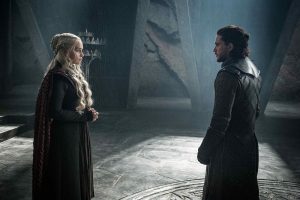 Then we get the historic meeting! Daenerys really plays up the queen bit and demands that he ‘bend the knee’. Tyrion knows it’s too much but what’s he gonna say? Well, of course, Jon will not do it. His main concern is fighting the white walkers. She wants him and the Northern armies to help her take King’s landing. Impasse. Things were pretty tense until Varys walked in and whispered in Dany’s ear. She gets the humbling news of Yara’s defeat and the capture of Elaria. She doesn’t quite place Jon under arrest but he’s all but a prisoner now on Dragonstone. 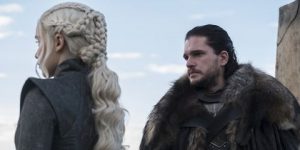 They both need each other’s help and they’re going to have to find a compromise. Tyrion speaks with Jon and finds what may be a solution. He goes back to Dany and says that Jon needs Dragon glass in order to fight the white walkers. Of course, neither of them really believes what Jon has told them but she agrees to let Jon mine and weaponize the dragon glass. What will she ask in return? 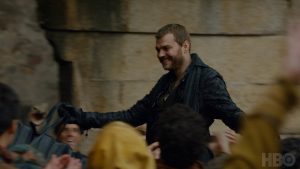 “I give you what no other man can give. Justice for your murdered daughter” Euron to Cersei but also at Jamie.

A victorious Euron struts through the streets dragging the captured Elaria and Yara behind him. He rides his horse right into the Red Keep! Is that allowed? He presents Cersei with his ‘gifts’; Elaria and Tyene. He keeps Yara though which makes me wonder what he’ll do with her. Does Theon still have a chance to save her?

Cersei locks up Elaria and Tyene in the dungeon. He kisses Tyene on the lips. Qyburn has cooked up the same poison that Elaria used to kill Myrcella. Elaria will have to watch. Not only that, but she’s going to leave the both of them down there to rot! She leaves instructions to make sure that the torches are always lit so Elaria can witness her daughter’s body decay. Damn. Cersei is so turned on by her viciousness that she rushes to Jamie to have ‘mad queen’ sex. The next morning when there is a knock on the door, she opens it without any fear of anyone seeing her brother in her bed. She’s queen now. And the High Sparrow is dead. 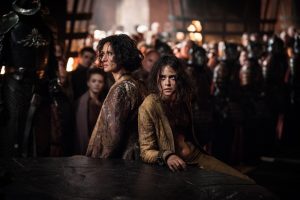 Cersei almost gives Euron what he wants. He agrees to marry him but only after the war is won. Euron really needles Jamie. He asks him if he can give him any advice on how Cersei likes it in the sack. Man. Is he cocky! Jamie will have to kill him at some point, right?

Cersei also takes a meeting with a representative of the Bank of Bravos. They owe them a lot of money but Cersei reminds him that the Lannisters always pay their debts. She asks him to hang around King’s Landing for a couple of weeks and she’ll find the money somewhere.

Theon gets picked out of the ocean by one of the few remaining ships in their demolished fleet. He was not greeted warmly. He has been through so much the only way to be redeemed is by death. But will it be in saving Yara? Will Euron let her live that long?

Well, it looks like Ser Jorah is cured! Although he’s left with some nasty scars. He receives a clean bill of health from a shocked Maester Marwyn! Jorah plays dumb and claims it happened due to getting enough rest and the climate. Ha! He thanks Sam warmly. He owes him his life. Sam tells him that his father saved his life many times so it was the least he could do. Maester Marwyn is amazed at what Sam has done. “I just read the book and followed the instructions”. Nevertheless he broke the rules but instead of getting kicked out he just punished him by giving him a tough task. He does tell Sam that he should be proud. He saved that man’s life. Sam is proving to be quite a valuable person to have around. 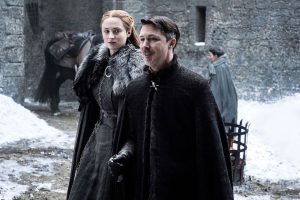 Sansa looks very comfortable being in charge, not only that, but she seems to really know what she’s doing. She walks around followed by her advisors including Little Finger. She gets sound advice from Little Finger which you can tell she hears and will pay heed to. She needs to think about every possible outcome and be prepared to act. Then there’s a commotion at the gates. It’s Arya! Finally! But no. It’s a different Stark. It’s Bran! Sansa is overcome with emotion and throws herself on him but he seems to have no feelings about it one way or another.

As the two of them sit under the tree Sansa wishes Jon were there. Bran does, too, because he has some very big news to share with him. doesn’t he? But then things get weird. He tells her that he’s the Three Eyed Raven which doesn’t mean anything to her. Bran tries to explain that he can see everything that has ever happened. He says he’s sorry for all that’s happened to her, especially there at their home. He begins to describe the night she married Ramsey Bolton. “You were so beautiful in your white wedding dress” he says to her. This really freaks Sansa out and she immediately gets up and walks quickly away. Bran is kinda really weird now. 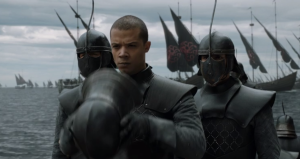 Grey Worm and the Unsullied attack Casterly Rock as we hear Tyrion explain how difficult it will be to capture. But they will have an advantage that every other army did not; Tywin had placed Tyrion in charge of designing the sewer system as a punishment. So Tyrion created a back door into the castle which the Unsullied now use in their attack. They take control fairly easily, in fact, too easily as far as Grey Worm was concerned. Where was the rest of the Lannister army? And then it starts to sink in as he looked out to see Euron’s fleet attacking the ships that had brought the Unsullied. And where had the Lannister army gone? 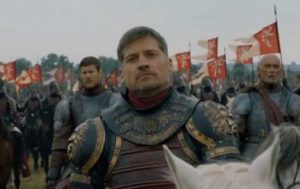 “You love her… you poor fool. She’ll be the end of you. She’s a disease. I regret my role in spreading it. You will, too.” Lady Olenna

They had gone to attack Highgarden! Poor Lady Olenna looks out from her keep to see the overwhelming force led by Jamie, Lord Tarly and Bronn marching towards her. They take the castle and Jamie meets with the calm and collected Lady Olenna. She asks how she is to meet her end. Jamie tells her that he talked Cersei out of a series of grisly executions and they agreed on poison. He pulls out a vial and pours it in her glass. “Will it be painful?” she asks. No. So she drinks it all down. But she has one last dagger to toss. She tells Jamie to let Cersei know that she was the one to poison Joffrey. Ouch. Why not? But she didn’t tell him that Little Finger was also involved. He caught a break. 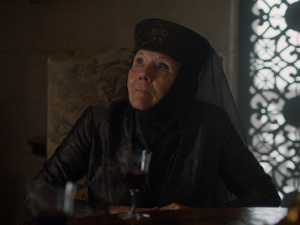 So The Unsullied are trapped on Casterly Rock making it a meaningless victory. Dany has not only lost another ally but another large part of her, one time, overwhelming army. Cersei has Highgarden and all of their gold to pay back the Bank of Bravos. She also now has enough food and supplies to feed her army. You cannot underestimate Cersei! Dany did. Sansa will not.

Charlotte! Where were the fashion statements made? Who wore it best?

Here we are, another week in Westeros and the fashion is as bleak and dreary as
ever. Bright spots were there however, some in the form of a pajama and some
the characters’ accessories.
The first person worth noting is Lord Varys, looking like a bald Russian nesting
doll in his fur trimmed Easter Sunday coat with built in awkwardly high on the
chest hand warmer. I especially loved how he looked running around in it, with
his hands still tucked high up inside the pocket.
Cersei seems to have an endless supply of decorative/crystal embellished
shoulder armor; would love to see her wear metal lions elsewhere- maybe she
could get a giant brooch or a hair clip like Daenerys? Seriously she needs to
do something with her hair right now- a lion clip seems like the solution. I
did, however love her post incest (gross) robe with those romantic (ew) and on
trend statement sleeves! 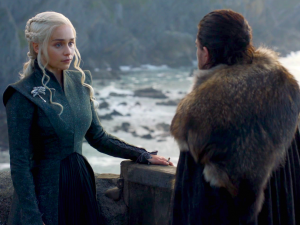 My final note is for Jon Snow, who started this episode off arriving south at
Dragonstone. I just felt very sweaty watching him, he seemed totally over-
furred/dressed for the southern climate. Maybe he would be less broody if he
would just start dressing more comfortably and appropriate for the weather.
See you next week 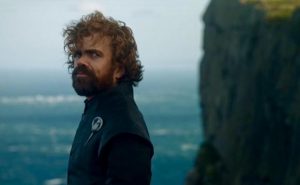 Cersei is playing her cards very well. She has proven to be a master strategist. Tyrion may lose some sway with Dany going forward. His plans have been laid waste.

I loved seeing Ser Davos flirting with Missandei. “Things have changed since I was here!” Missandei smiled at the attention but inside she was saying “Sorry. I got a man!”

I was speaking with a fellow Thrones fanatic and she brought up how pale Jon is these days. She says that Jon and Beric Donderrion are ‘walkers of the light’. They died and were resurrected but not as zombies. Maybe there are ‘white walkers’ and then there are ‘Light walkers’? She says that his heart no longer beats and his blood no longer flows which is why he is so pale. Interesting.

Sansa is smart. Little Fingers’ advice rang true to her. But does this mean she will allow him to influence her further and to what end? 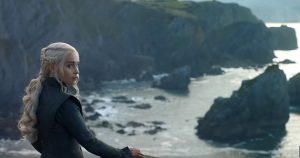 1 Dany is losing the war.
2 Theon and Jon Snow will see each other. Jon will not be filled with joy.
3 Dany and Ser Jorah will reunite!
4 It’s time we see The Hound and Tormund meet.
5 Arya will arrive at Winterfell next week!