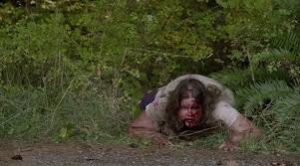 Some boys play catch
The ball goes in the street
The oldest boy sees a woman by the side of the road
It’s Miriam! She’s still alive!

Becky on the phone
“What? I don’t have a car!”
She calls her mom
Asks to borrow her car
“It’s Steven!”
“Sorry Norma! I have to go!”
Becky reaches under the bed
Pulls out a gun
Shelly pulls up in front of Becky’s trailer
Becky runs out of the trailer holding the gun
Grabs the keys and takes off
“I hate him!”
Shelly jumps on the hood of the car

Becky backs up fast
Doesn’t stop
Shelly gets thrown off
Carl comes over
“Can you give me a ride to the Double R, Carl?”

Shelly calls Norma
“Call Bobby”
Carl calls Maggie
“Can you patch us through to Deputy Briggs?”
“Bobby, she took off in my car. She’s got a gun” 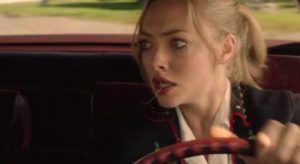 Becky arrives at an apartment buidling
She bangs on room 208
“Steven I know you’re in there!”
Some lady pokes her head out of the next room
“They just left! There’s nobody in there!”
“Fuck you, Steven! Shelly fires several times through the door
Steven and some girl are hiding in the stairwell below
(Donna Hayward’s youngest sister Gersten!)

Maggie takes many calls
“Where’s your location? Someone’s on the way”

Two cars pull up in an empty lot
Hastings with Mackley, Gordon, Tammy, Albert and Diane
“William, is this where you saw Major Briggs?”
Hastings sees a figure
Albert and Gordon see it too
“You think there’s one in there, Albert?”
“We’ll soon find out”
Something happening in the sky 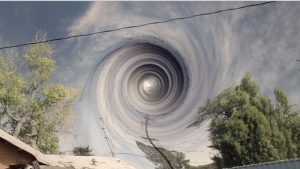 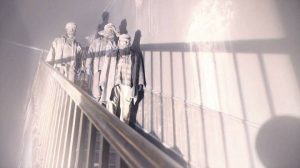 Gordon almost disappears
Albert pulls him back
“I guess we found out”
“We sure did, Albert”
Albert sees a body
Diane just sits against the car and smokes
It’s a mother headless body
“Ruth Davenport, I presume”
Diane sees a figure approach the car with Hastings and the detective
Its like one of those homeless guys from episode 8 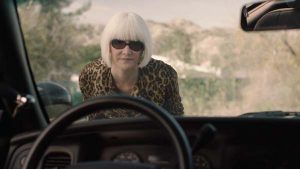 Hastings gets attacked
Crunch!
“Oh my God!”
“What the hell happened, Mackley?”
Hastings has had half his head bitten off
“He’s dead” 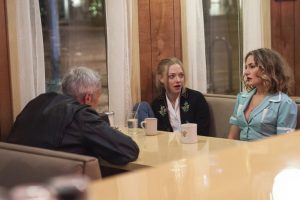 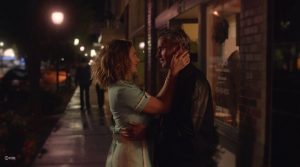 “See you later?”
“Same place?”
Norma observes silently
Shelly comes back to the table, beaming
Shots are fired!
Everyone takes cover
Bobby draws his gun and goes outside
A little boy fired a gun from the car 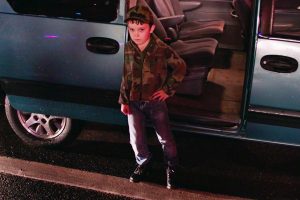 Mom freaks out
Cars are honking!
Another deputy arrives
Bobby goes to talk to the woman honking the horn
She’s hysterical
“We’re late for dinner!”
“She’s sick!”
There’s a little girl in the passenger seat
She rises up
She’s vomiting green slime
The old lady is screaming in terror
Bobby looks on transfixed 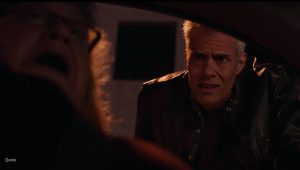 Truman and Hawk on Google Earth
“By my reckoning this is where we’re headed but there’s no road”
Hawk lays out a map, an old map that is always current
Its a living thing
It’s filled with symbols 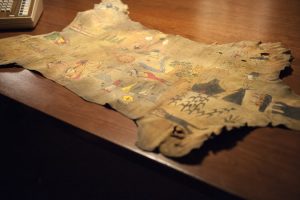 Blue Pine Mountain
Not a camp fire, a fire symbol
More like modern day electricity
Good?
Depends on the intention behind the fire
What is this? 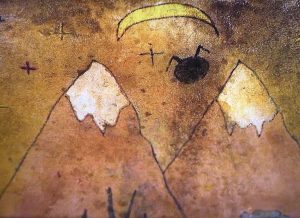 “It’s corn but it’s black. Diseased and unnatural. Death.
If you put these two symbols together you get this – Black Fire”
“What is this?”
“Frank, you don’t ever want to know about that”
Log Lady calls
“Hawk, can you hear me?”
“You found something, didn’t you?”
“My log is afraid of fire. There’s fire where you are going” 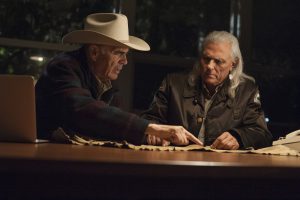 A knock on the door
“What is it, Jesse?”
“Are you interested in seeing my new car?”

Gordon’s hand is shaking
“Cat on a hot tin roof! It’s never done that before!”
“The picture you took of Ruth, I would like to see it, Albert”
Her arm has a series of numbers on it
“What place do those coordinates represent?”
Tammy brings coffee and donuts
“Ah, the policeman’s dream!” 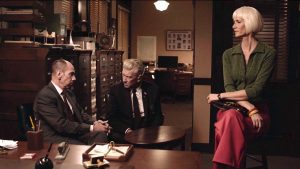 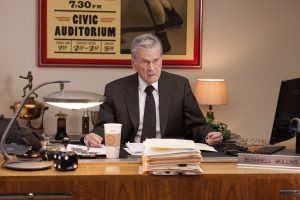 Don Murray calls Dougie into his office
Phil Bisby lures Dougie into the office with a tray of coffee
Dougie grabs a coffee and drinks it with both hands
“It’s clear that your investigative work has exposed a ring of organized crime and possible police corruption flowing from this office”
“Thanks to you we now know that the Mitchum Brothers case was not arson”
“The Mitchums just called me asking for s it down with you”
“They’re going to be ecstatic when you present them with this 30 million dollar check!”
“They want to see you at 530. They’re sending a car”
Dougie just nods

The Mitchum brothers having their breakfast
They’re eating raisin bran cereal
“Rodney, I had a dream. I dreamt about killing that Dougie Jones. I can’t wait to kill this guy” 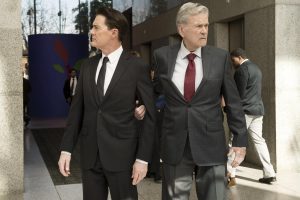 Don Murray walks Dougie out to wait for the car
Dougie sees the one armed man beckoning him
Dougie walks towards him
But he disappears
Dougie, holding a box
Gets into the car
“Where you taking him”
“Santino’s”
“Knock em dead”
Dougie starts rubbing his face
Like Evil Cooper rubbed that guys face in the first episode
“Dead?”

The car drives up the Strip
“Viva Las Vegas”
Looks like they’re headed Downtown
Hmmmm maybe out of town
The brothers are waiting in a car far out of town
Dougie’s limo is driving out into the desert
“What?”
“My dream. In the dream you’re Candy cut was completely healed”
Bradley removes Randolph’s bandage
It is healed
“There’s more. I can’t remember”
The brothers get out of the car
Dougie’s limo pulls up 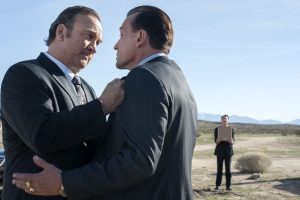 “That box he’s holding…it was in my dream. If what’s in that box is hat I think it is then we can’t kill him”
“It means he’s not out enemy but it has to be this one certain thing”
Randolph draws his gun and points it at Dougie
“Ok, in that box there. Is that a cherry pie?”
“Cherry pie”
Bradley goes over and looks in the box
Yup!
Cherry pie!
“Frisk him just in case”
Bradley finds the check!
“I love this guy!”

The piano player plays us out