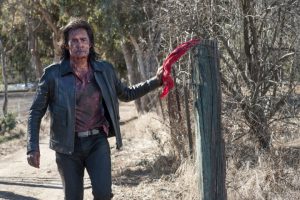 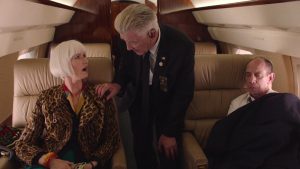 Gordon tells Diane they need to make a stop
“Fuck you, Gordon. I want to go home!”
“This is important. An old case involving a man Agent Cooper once knew”
“Blue Rose case”
She consents but holds up a couple of tiny vodka bottles
“Coming up!”
Albert wakes up and looks over at Diane
“I know, I know. Fuck you, Albert”
Diane tries to call someone but the number is blocked
Warden Murphy calls
“Cooper’s flown the coop!”

Evil Cooper and Chantal walk by two dead bodies
Probably the couple that lived in that house
Very matter of fact
EC calls the guy in Vegas
“Did you do it?”
“Not yet”
“Better be done next time I call” 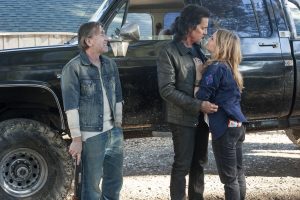 Tim Roth is ‘Hutch’
Hutch brings him a rifle and a satchel with unknown context
“I want you to kill the Warden in the next two days”
“Then I have a double header in Vegas”
Does he mean Good Cooper and Dougie’s wife?
“Hey Chantal, give the boss man a wet one”
They kiss
“I wish it was more”
“I’ll take a rain check”
EC tosses his cell phone
“Kill that phone and get out of this place”
Hutch takes his rifle and blasts the phone 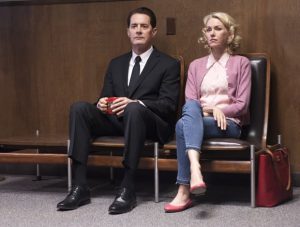 Las Vegas PF
Dougie and his wife
Dougie holding a cup of coffee
Cops questioning Dougie’s boss
“Damn strange business. First his car blows up and then somebody tries to kill him”
No response from the cops
Dougie’s boss tells Dougie to take the rest of the day off
“Starting tomorrow you and I have to start working together, get some answers”
“Answers”

There is no record of Dougie Jones prior to 1997
Witness protection?
“You still have that guy at Justice?”
“Should we talk to him again?”
“It’s like talking to a dog”
“And she does all the barking”

One of the cops brings Dougie a fresh cup of coffee
He drinks it with both hands like a man drinking his first glass of water after being in the desert for a week!
The cops identify the little guy hit man as “Ike the Spike” 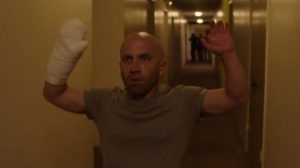 The camera zooms in on Dougie’s face
He’s staring at the flag
America The Beautiful starts playing
Good Cooper wants so badly to come out!
A tall, shapely woman comes out of a room and walks by
Dougie focuses on her red, high heel shows
And then to the plug outlet
Starting to piece it together
Slowly 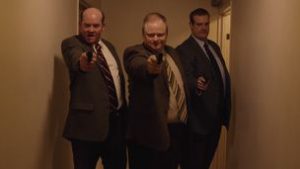 The cops show up at the hotel where Ike The Spike is
“You’re under arrest Ike for attempted murder”
“We have your palm print. As a matter of fact, we have your whole palm?

She and Andy squabble over the color
Beige or Red!
“I’m sorry, punky. You can get the beige chair”
Then Lucy goes and purchases the red chair and smiles
Such sweethearts! 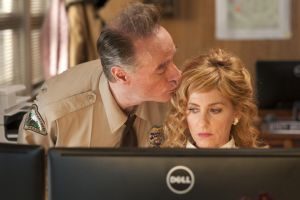 Bobby comes home with Truman and Hawk to asks his mom some questions
They need to ask Mrs. Briggs some questions about Cooper and her husband
She said that her husband told her
“One day our son Bobby and Hawk and Sheriff Truman would come and ask me about Agent Dale Cooper”
He told her to give them something
“Would you like some coffee?”
They all say no. What did he tells her to give them!
She walks over to a chair and tells them to watch
She pulls out something from it
A circular piece of metal
She gives it to them
What? 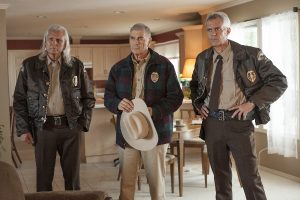 Gordon and company arrive at the morgue in Buckhorn
Diane decides to stay in the lobby and smoke
“You can’t smoke in here”
“It’s the fucking morgue!”
Diane checks her phone 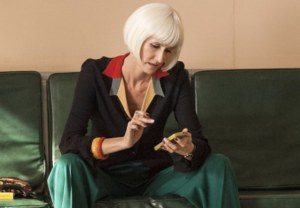 She has received a text
“Around the dinner table the conversation is lively”
Is this the text that EC sent on his phone before he had Hutch ‘kill’ it?
They look at the headless corpse of what may be Major Briggs
The body is of a man in his 40s
about the age he would have been 25 years ago when he was thought to have died
The coroner also shows them a ring she found in his stomach
inscribed ‘to Dougie Love Janie E”
“We need to speak with William Hastings” 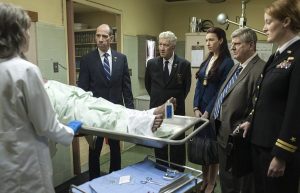 Twin Peaks
Jerry is looking at his foot
A child’s voice speaks
“I am not your foot”
He can’t seem to make it move
He must be really stoned
He starts fighting with his foot! 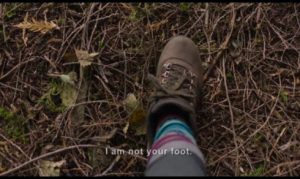 Back at the Sheriff’s Department
Lucy is at the front desk eating a sandwich
“I’m not here! I’m on my lunch break!”
Truman and Hawk try to figure out how to open the metal object
Bobby smiling tells them he knows how
His dad showed him
They go outside and he slams it down on the ground 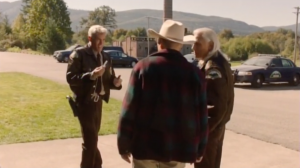 It starts making a noise. He holds it to Truman and Hawk’s ears
Then he throws it down again!
It opens
Inside is a small piece of paper
directions to a spot near ‘Jack Rabbit’s Palace
a specific time and two dates – 10/1 and 10/2 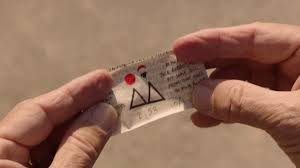 Buckhorn PD
Diane smoking outside
Gordon and Tammy join her
Long awkward silence
Finally Gordon asks for a drag of her cigarette
“Whoa!”
“We used to smoke together way back when” 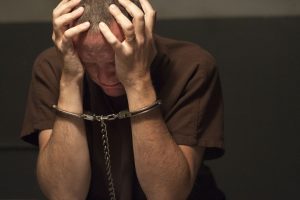 Hastings crying like a baby
Tammy goes in to question him
Hastings wrote a blog called “The Search for The Zone”
He wrote about discovering an alternate reality, ‘different dimension’
“It’s real! It’s all real!”
He claims to have entered this place
“We met the Major”
“He was hiding there, hibernating as he said. he asked us to get him numbers, important numbers, coordinates. We found them in a place he told us to go, a secured military database.”
“Ruth brought him the numbers and then something terrible happened!”
Some others came in and assaulted them
Hastings claims he didn’t kill Ruth
Tammy shows Hastings some photos
And he identifies Major Briggs 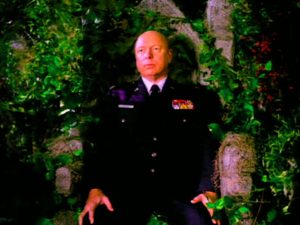 “We gave him the numbers and he started to float up. He said two words ” Cooper. Cooper” and then he disappeared. It was beautiful. Then Ruth was dead. It was so terrible.”
“Fruitcake, anyone?” (Albert, of course)

Twin Peaks
The Great Northern
Ben and Beverly still trying to figure out where that sound is coming from
“It’s kind of a mesmerizing tone”
“Otherworldly”
They turn to each other, touch
“I can’t do this”
“You’re good man, Ben”

Bar
Who is playing?
One guy on keyboards
A blonde sits alone
She looks very worn
She’s joined by a brunette
They look like junkies
“You know that zebra’s out again”
The blonde has an awful looking each under her left arm
Yuck!
“Have you seen the penguin?”

And playing at the Bang Bang Bar tonight!

Au Revoir Simone is back!