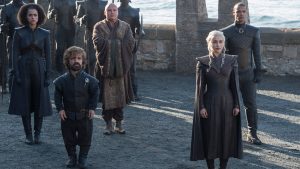 Well, that was the fastest hour I’ve ever spent! Knowing there is a finite number of hours left before it’s all over makes every minute precious. While I wanted the episode to start off filled with battles between armies and dragons it instead was filled with battles between characters. Season premieres always start off by letting us know where everyone is and this one also lets us know where everyone is emotionally. The stage has been set for the big battles to come.

As always, Charlotte Radwell will fills us in with her unique take of the fashion of Westeros! But first let’s review what we just saw.
ARYA / THE TWINS 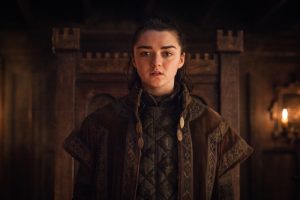 GOT uses a cold open for only the second time in its history to great effect. We open on Walder Frey. Walter Frey? But Arya killed him. Yes, which means this isn’t Walder Frey. He’s called all the men to a feast.

“You’re my family. The men that helped me murder the Starks at The Red Wedding”

He makes a toast but he himself doesn’t drink. he also tells the serving girl not to drink, sparing her the fate of all the others. Soon they are spitting up blood and collapsing in a pile of death. Frey removes his face to reveal that is is, of course, Arya Stark! We knew it almost immediately and we relished the scene almost as much as she did. Revenge! Then she turns to the serving girl and tells her:

“When people ask what happened here tell them The North Remembers. Tell them Winter came for House Frey” 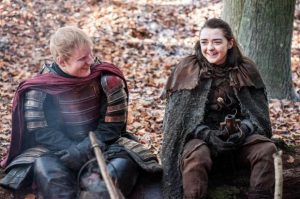 Later on, on her way to King’s Landing she comes across Ed Sheeran singing in the woods dressed as a Lannister soldier. He and his merry men of Lannisters invite her to their fire and to share their meat. You can see her scoping out the situation, seeing where their swords are. They seem nice enough but the whole time you’re waiting for it to turn bad and she’ll have to kill them all.  But it never does.  They’re just a bunch of ordinary fellows talking about missing their families and just doing what they’re asked. “Why are you headed to King’s Landing?” they ask her.

“I’m going to kill the Queen.” she says matter of factly.  They all are very quiet for a moment before breaking out in laughter. Aya smiles.

The Night’s King and his horde of wights are marching towards the Wall. As we watched we saw that there were a couple of giants marching with them and someone wondered if one of them was Wun Wun but he died in Winterfell so they would have burned his body. That would have been a massive funeral pyre indeed! But then someone wondered if Hodor was now one the living dead. Everyone groaned in terror! “Damn you, Marc!” 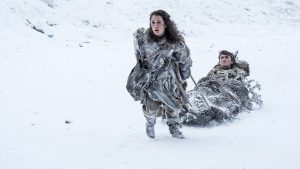 Bran and Meera reach the Wall. Dolorous Edd comes out to greet them. Once Bran convinces him that he is indeed Brandon Stark Edd allows them to enter. But by entering Castle Black Bran is also allowing The Night’s King to be able to enter just as he was able to enter the Cave. The only question is will the Wall completely come down? I think it will. 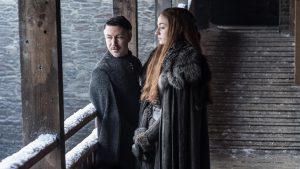 Jon tells everyone about Dragon glass being able to kill the dead. He is sending the Wildings to help man the Wall (the new Night’s Watch?) and he wants everyone to start training for battle even the women. This rankles the Lords. Lady Mormont speaks up though, as always “I don’t need your permission to fight!” She will have Bear Island train every man woman and child for battle.

There is also a matter of the Carstarks and the Umbers that sided with Ramsey. Jon wants to forgive and forget but Sansa speaks up in disagreement. They committed treason by going against the Starks and feels that their castles should be given to families that actually fought for them. This gets a round of huzzahs from the lords. But Jon holds firm, looking very annoyed though. “So there’s to be no punishment for treason and no reward for loyalty? Sansa fires back. Jon calls on the last living members of both houses, a young red haired little girl and a scared looking little, boy. He asks for their loyalty and their draw their swords and take a knee to the King of the North!

Privately, the argument continues. Jon didn’t appreciate being called out in front of everyone. (“Never take sides with anyone against the family again. Ever” Michael Corleone) But Sansa lays out some hard truth:

“You have to be smarter than father and Robb. I loved them and miss them but they made stupid mistakes and they both lost their heads for it.”

Then they get a raven from King’s landing, a message telling them to come and take a knee and pledge their support to Queen Cersei. Fat chance! Sansa tells him that he’s only thinking about the threat to the North but he should also worry about Cersei. She will kill everyone to get what she wants.

“You almost sound like you admire her” Jon says with a look of concern.
“I learned a great deal from her.” Sansa tells him 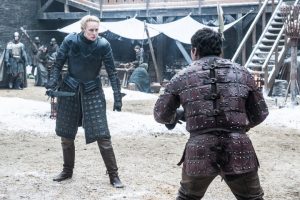 Meanwhile Brienne (well coiffed!) and Pod are practicing the sword when Tormund distracts her with his leer causing Pod to land a sword on her arm. She then tosses him, face first, into a pile of snow. “Lucky man” Tormund says.

Little Finger approaches Sansa who doesn’t even look at him. “Why aren’t you happy?” he asks. Oh he knows exactly why. Brienne must have noticed because she comes right up to where they are. Little Finger tries to say something but Sansa shuts him down “No need to seize the last word. I’ll assume it was something clever” 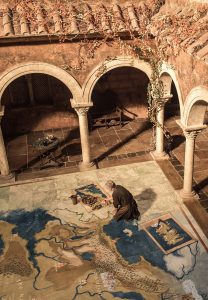 Jamie finds Cersei in the patio standing on a huge map of Westeros that is still being painted! The paint is still wet and she’s walking all over it! Jamie brings up Tommen.  They never talked about it,

“I loved them. I did. But they’re ashes now” Cersei tells him. Moving on. 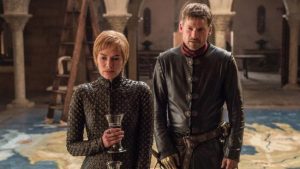 He is concerned that they have more enemies than allies. Cerise seems well aware of it and before you know it, Euron Greyjoy and his beautiful new ships arrives! She receives him in the grand hall and he is brazenly hostile to Jamie. 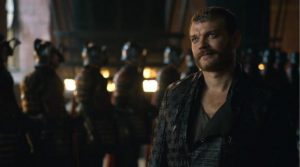 “You killed your brother, I hear” Cersei says

“You should try it sometime” he responds

Jamie the whole time standing by her side feeling like a third wheel. 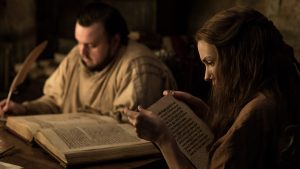 We get treated to a long  montage of Sam doing grunt work. Serving up food in the kitchen and emptying out bedpans. They seem to use the same objects for both plates and bedpans! Yuck! Plus one of his jobs is putting away books. Sam desperately wants to get into the locked up portion of the library but his new boss Archmaester Ambrose (Jim Broadbent) won’t allow it. 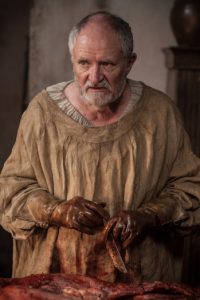 So he just swipes the keys from the old maester and sneaks in and takes some books. He finds one that has maps of Dragonstone and states that t ere is a rich supply of dragon glass on the premises.  He must let Jon know!

As he was collecting dishes from what seemed to be the prison part of the Citadel he encounters a man with an ugly looking arm. “Has she come yet? The dragon queen Daenerys Stormborn?”  It’s Ser Jorah!  he must have come to the Citadel seeking a cure for the greyscale.

THE HOUND / ON THE ROAD 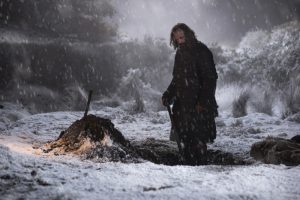 The Hound, Dondarrion and Thoros come across a farmhouse and decide to take refuge.  The place looks familiar to The Hound and to us, too.  If you remember in season 4, The Hound and Arya were shown some kindness by a farmer and his daughter and he repaid their kindness by robbing them of what little money they had. When they enter the farmhouse they find the skeletal remains of the farmer and his daughter.  It seems he cut her throat and then his. Dondarrion figures they were starving to death and he decided to end both of their lives. The Hound knows he was probably the cause of their demise. He asks Dondarrion why the god of light keeps bringing him back to life, for what reason? Dondarrion doesn’t know but there must be some reason. Toros tells The Hound to come to the fire and look into the flames.  “What do you see?” Toros asks.  “Logs” The Hound sasses back.  But then he starts to see something.  A wall of ice.  THE Wall. And thousands of white walkers marching.

Later in the night, Thoros wakens to find The Hound digging graves for the farmer and his daughter. It’s a beautiful scene. The Hound genuinely feels guilty.  He’s come a long way. He’s always had a heart but now it’s coming to the fore and I feel he is going to play a major role in defeating the white walkers.

“Shall we begin?” Dany

Dany and the gang finally arrive at the Targaryen homestead. She bends down and touches the sand. Home. They walk to the throne room, majestic but empty.  The whole place is empty. Dany and Tyrion enter the map room. Stannous spent much time in that room making plans, making black magic babies with melisandre and dreaming of sitting on the Iron Throne.  Now it’s Dany’s turn to make plans.

So GOT is back and winter is here! There were some good looking getups in this episode, but first I have to mention my concern with the lack of winter hats on the poor Starks’ heads. It’s cold out there and Sansa’s usual Medieval twisty braidy look definitely isn’t helping. 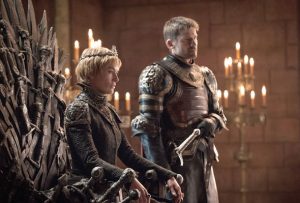 Meanwhile in (on?) King’s Landing, Cersei has chosen to highlight her awkward length shaved head grow-out with some sinister high neck maxi jackets. Special shoutout to her bejeweled/studded/lion metal neckpiece. 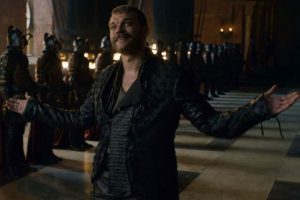 In an insult laden fancy goth meetup, Euron Greyjoy visits the Lanisters wearing the sickest leather moto, with star cutouts on point, slubby layers underneath- 10/10 perfect winter look. I personally would have completed it with some smudgy black eyeliner.

Lots of great looks this week, with an honorable mention going out to Daenerys- who I didn’t write about because I think she was wearing that same sci fi tomb raider outfit at the end of last season? Anyway, see you next week- only six episodes left! 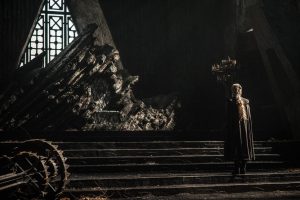 That was a great season opener! We got to see everyone except Melisandre and I’m sure Gentry is ‘still rowing’ around somewhere. Where and when will he find land again?

Aya seemed to have stopped herself from killing those Lannister soldiers but will all the killing she’s been doing warp her soul to the point she may not be able to control herself one day?

Sansa and Jon had a massive public and private quarrel. I can see both sides and neither are wrong. Jon is trying to unify the North. They need all the help they can get.  Sansa sees the cold truth of the world by saying their needs to be punishment when people do bad things.  Too many times she’s seen what happens when you’re passive. She has no intention of being passive ever again. Jon asks who he should listen to for advice? Her?  and she answered him by saying “Would that be so terrible?” Can they work together?  I think so but there’ll be more disagreements.

Cersei figures Dany will land at Dragonstone and she was right which means she needs to take control of Dorne and High Garden before Dany takes them.

1 Jon will head North to fight the Dead.  Sansa stays behind to fight Cersei.

3 Sam will find a cure for Ser Jorah

5 Euron and his navy will head to take Dorne