FEAR THE WALKING DEAD RECAP: EPISODE 7 THE UNVEILING AND EPISODE 8 CHILDREN OF WRATH 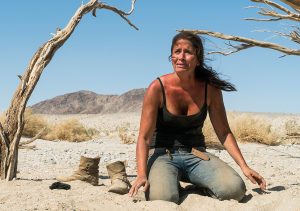 Well we finally found out what happened to Ofelia! She’s joined forces with Walker and the Indians! And she’s turned into a toughie! Madison takes more and more control but is she making the right moves? I don’t think so. The mid season finale came quickly and it was filled with action. 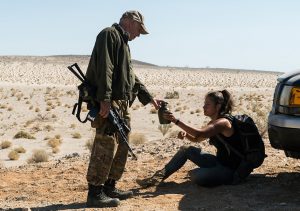 We see that Jeremiah Otto found Ofelia in the desert but refused to help her by taking her back to Broke Jaw Ranch. There are no brown people allowed. He leaves her to die in the desert and she almost does. She starts to hallucinate her father, Daniel, and he’s telling her not to take off her clothes or fall asleep. She does both. But then along comes Walker! He takes her back to the Black Hat Reservation and nurses her back to health. 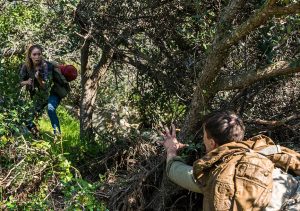 Alicia catches up to Jake and they reach the Black Hat Reservation with has a gas station and a diner. Jake is determined to come to a peaceful resolution of their problems but Walker is set on getting their land back which they were trying to do even prior to the apocalypse. They decide to do a parlay and Ofelia returns with Jake to the ranch while Alicia stayed behind with Walker. Sort of a hostage swap. 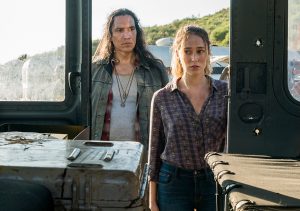 Walker takes Alicia into a trailer that contains all the memorabilia of the tribe including the bones of his great grandfather. He tries to show her what the land means to them.
While Alicia starts to see Walker’s side of things better she still holds him responsible for shooting down the helicopter and killing Travis. Walker shows her the downed chopper with pride not realizing she had been in it when they shot it down. 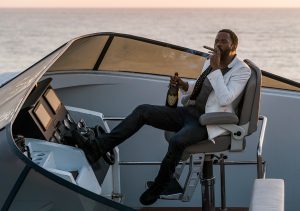 “The world is dead.” Strand

Daniel abandoned Strand at the hotel but Strand managed to get away and wouldn’t you know it! He finds his beloved Abigail! It’s basically run aground on a beach so Strand makes his way out to it, kills the assorted band of walkers that were lounging around and retakes the boat! Unfortunately, no power. He finds a slightly blood stained white dinner jacket and a bottle of very good champagne, sits on the deck and gets drunk. Suddenly, he gets a signal on the radio. A Russian cosmonaut stranded in space! They have a delightful conversation, exchanging literary quotes. It’s an interesting scene. You’re reminded that Strand began as a sophisticate con man that had planned to continue living the good life with his lover when The Clarks came along and his plans went awry. He sets the boat on fire as a kind of funeral for the past and moves forward. But to where? 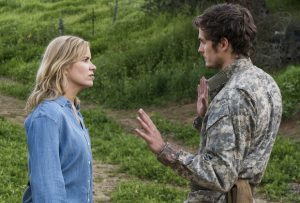 Madison did not appreciate Jake leaving Alicia with Walker. Jeremiah basically decides to stay out of it and let Jake make his play. Madison is not one to sit on her hands. She gets Troy and his militia to carry out a rescue mission and it’s a shit show. They get Alicia back but many die on both sides. Nick even gets saved by Troy! A little bro bonding. 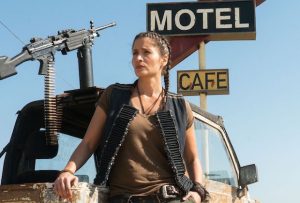 Jake, of course, decides to take Ofelia and race over to Walker’s to try and keep the peace. He’s a real fool. Walker is about to scalp him but Ofelia stops him. It seems Ofelia and Walker may be more than friends. Walker lets Jake go back to the ranch.

The next day a motorcycle zooms up to the Ranch gates and tosses Ofelia off. It seems that she’s been punished for going against Walker. I didn’t buy it but everyone else does. Jeremiah tells Madison that Ofelia will be her responsibility and she puts Ofelia to work in the kitchen

Later that night, everyone starts getting sick, throwing up and dying which of course creates a bunch of ‘walkers’ and chaos within the community. It gets really serious when Nick falls ill. NO way can he die! Madison spots Ofelia running away, trying to get away in a truck. Madison smashes throw the window and pulls her out and starts wailing on her! 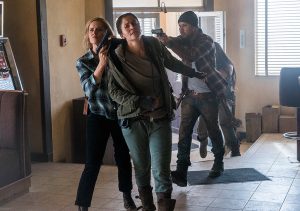 Madison takes her back to Black Hat and with a gun to Ofelia’s head confronts Walker and demands to know what he gave Ofelia to poison the ranch. Anthrax. No cure. Nick is strong and he may survive. Walker admires Madison’s strength and allows her to leave unharmed but warns her to take her family and leave or they’ll all die.

Ofelia did not know that she was given anthrax. Shouldn’t she have asked? She did not think she was sent to kill people and she feels a bit betrayed by her partner, Walker. They’re interrupted by people screaming about a fire. It’s a diversion! Madison and Troy set the fires to steal the trailer with the tribe artifacts and Walker’s grandfather’s bones. 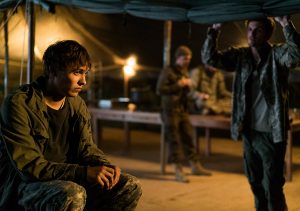 “Nick, he’s going to disappoint you. All this, this hell we’re in, it’s all because of him.” Jake

Nick makes a recovery and Jake agrees to remove the restraints. He decides to follow a hunch and dig under the floor where Jeremiah shot through a couple episodes back. He finds human remains. He confronts Jeremiah who admits that they killed Walker’s father and buried him under the floor. 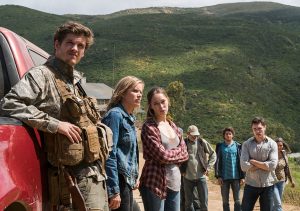 “You have no idea what I carry.” Madison

Madison meets with Walker and presents him with the skull of his father but it doesn’t satisfy Walker. They have until sun up.

The Clarks hold a family meeting where Nick reveals to Alicia that it was Troy that killed Gretchen and her family. Alicia is livid! She lets Madison have it but Madison is unapologetic about the decisions she’s made. She’s done everything for the safety of her children. The she proceeds to tell them a story. She tells them about growing up with an alcoholic and abusive father and that she shot him one morning as he was sleeping off the night before.

“I’d do it again. I’d do it a thousand times to protect her. To protect you.” 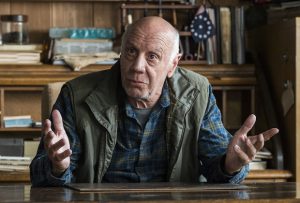 With that philosophy in mind, she heads over to Jeremiah’s house and tries to convince him to do the right thing. The right thing being to shoot himself to satisfy Walker’s demands so that everyone can move on in peace.

“Do this or everyone dies, including your sons.”

Well, Jeremiah won’t have anything to do with that! He only cares about his survival. Just then, Nick walks in. Jeremiah starts ranting and raving and out of nowhere Nick shoots him in the head with the gun Jeremiah gave him. Madison tells him to leave and she places the gun near Jeremiah’s hand. Troy and Jake rush in and find their father. As they carry Jeremiah’s body out of the house and put him in the back of a truck, The Clarks stand on a balcony overlooking the ranch. Just as Madison said way back in episode 2 – They took over the place. A very Rick move. 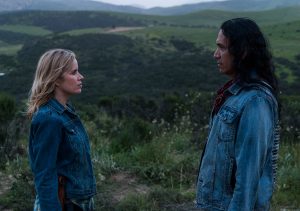 Madison meets with Walker once more. This time she hands him a head that’s still warm. Jeremiah’s. This seems to satisfy Walker. War averted. 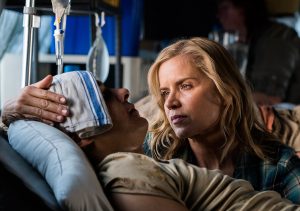 The first 8 episodes happened in a whirlwind. It moved swiftly and with momentum. From the snippet I saw from Episode 9 it looks like Walker’s tribe is moving *‘kit and caboodle’ onto Broke Jaw Ranch which is going to make some people really angry. Way to ratchet up the tension!

Did you notice that there were very little walkers in the first 8 episodes? The dangers, especially in the early days of the zombie apocalypse derived from human on human carnage.

Now will Daniel and Strand find their way to the ranch? Or will The Clarks be forced to move again and find them on the road? I’m thinking the latter.

*The words kit and caboodle have rather similar meanings.
A kit – is set of objects, as in a toolkit, or what a soldier would put in his kit-bag.
A caboodle (or boodle) – is an archaic term meaning group or collection, usually of people.