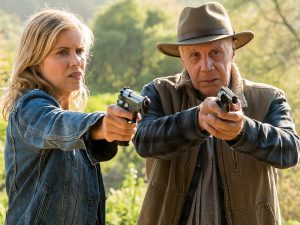 Things are heating up on Broke Jaw Ranch! The Clark kids are learning to shoot guns and Madison is making power moves. Jeremiah seems to be losing heart and fear and panic is spreading through the community. Why can’t everyone just relax in the Zombie Apocalypse? The Indians and the Ottos should find a way to leave together! There are NO walkers where they are! Make it work! But no, they will ruin everything! 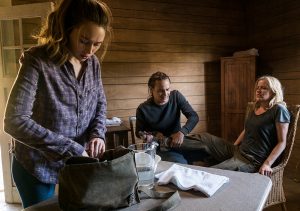 Madison, Troy and the other militia men finally make it back to the ranch; their feet cut up and blistered from the journey. Troy tries to downplay what happened but Mike (the one that saw Troy out a knife to Madison’s throat last week) speaks up. He tells them that the others they went looking for were dead, including Bill McCarthy (Crow fodder) one of the original founders. The Indians did it and warned that if they all didn’t leave they would end up dead too. The whole community gets worried but not Jeremiah who blows it off. Troy is all for going after the Indians but Jeremiah puts the kibosh on that and chews out Troy for his failed leadership. Madison comes to his defense though. She knows that they’re going to need what Troy can bring to the party and that means open hostility and violence. Very pragmatic, Madison is.

Meanwhile, Vernon, another original founder and father to Mike and Gretchen (Alicia’s ‘bible study’ partner) decides he’s taking his family and leaving. This leaves both Jeremiah and Troy feeling betrayed. Vernon leaving would mean Jeremiah is the last remaining founder and Mike was Troy’s best friend. This sets Jeremiah on a bender and Troy to confront his friend Mike. It leads to a confrontation between the brothers and Jeremiah actually pops Troy in the jaw! 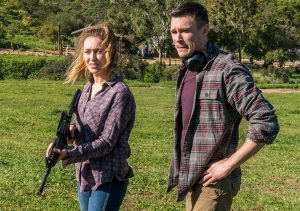 “The rhythm method is bullshit, I told you that right?? Madison to Alicia

Alicia and Nick (Nick-icia?) are going strong. The next stage in the courtship is Jake teaching Alicia how to fire a rifle. This means Alicia will have to use her new skills in the mid season finale. Perhaps saving Jake? That would mean the love is real. Later on she tries to sneak into the bunkhouse and wakes up Madison, who calls her out for being with Jake. Alicia tries to play it off like it’s no big deal but it’s obvious she’s into him and Madison sees it too.

When Jake decides to take matters into his own hands and sets off to meet Walker and his tribe to work out a truce, Alicia decides to follow him after finding out that her friend Gretchen and her family were killed by the Indian tribe. 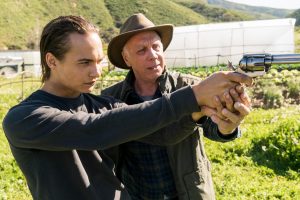 “You know that song, “you can’t be with the one you love, love the one you’re with”? Well, it goes the same with hitting people.” Jeremiah

Not to be out done, Nick takes some shooting lessons from his new bestie, Jeremiah. They make a good pair. I think they respect each other. When Jeremiah falls off the wagon and shoots up Nick’s cleaned up new pad, Nick tucks him into bed to sleep it off. He even has coffee for him the next morning and pretends it never happened. That’s a good friend.

Jeremiah notices a horse in the field that belonged to Vernon and fears the worst. They and Madison venture out to find out what happened. 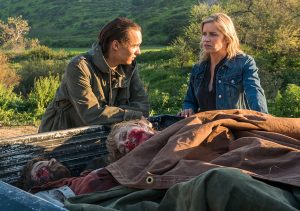 “There’s a fight coming. Everyone who leaves, leaves us weaker.” Madison

As feared, Jeremiah, Nick and Madison find the RV belonging to Vernon and family. They’re dead and have turned. Jeremiah walks into the RV and takes out Vernon and his wife. Mike is done and this leaves poor Gretchen. They find her and some other walkers munching on a horse. Madison points her gun to take her out but cannot pull the trigger. Nick eventually does the deed. Nick believes that Troy did this, not Walker and the tribe. Jeremiah agrees. But once they get back to the ranch and show everyone the dead bodies of Vernon and family, Madison uses it to make a rousing speech blaming Walker and the Indians and assuring them that to leave the ranch would mean death and that they need to stick together and let their militia protect them.

Nick is surprised and confronts her later saying that she should have let him know what she was going to do. He gets it and supports her but he does not trust Troy.

Madison gives troy a pep talk and he gathers the militia and gives a rousing speech of his own. Madison looks on with confidence. Troy certainly has the support of his team. She sees in Troy the kind of leader they need when the fighting comes. 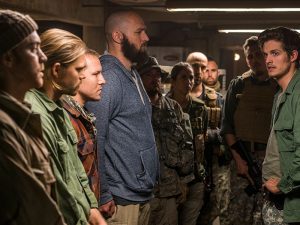 When they’re alone again, Troy admits that it was him that killed Vernon and his family. He was hurt about Mike leaving and didn’t plan to do it but things got out of hand. Madison doesn’t bat an eye. She knew all along it was him. She gives him a pass this time and tells him that he needs to control himself going forward. He needs to be able to protect the community when the time comes and Troy gives her a ‘Yes, ma’am.” I think she has officially become his new mama. Madison is playing a dangerous game trusting Troy. Let’s see if it works out.

I loved the scene where the whole community comes out to witness all the fires that the Indians started all around the ranch. They’re surrounded! 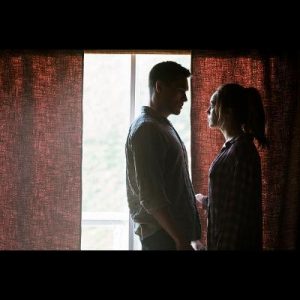 Jake looks like a goner. It’s just a matter of what inventive way Walker will have to kill him. Alicia will find him of course.

Where the hell is Luciana now? Will she find Ofelia?

The season is going by fast! We’re already at the mid-season point? Looks like they’re going to take 7 weeks off and they just happen to be the 7 weeks that Game Of Thrones will be on. Coincidence? Absolutely not! Smart planning.

Previous TWIN PEAKS THE RETURN EPISODE 8 Next FEAR THE WALKING DEAD RECAP: EPISODE 7 THE UNVEILING AND EPISODE 8 CHILDREN OF WRATH