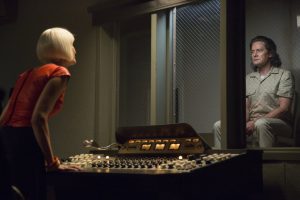 Who’s the old man in the woods?

“Someone stole my car?”

Jerry hangs up the phone

Hawk found letters, going over them with Truman

“This came tom me in a dream last night”

“My name is Annie. I’ve been with Dale and Laura. Good Dale is in the Black Lodge . Write it in your diary.”

Laura said Annie came to her in a dream

Hawk figures the Cooper that came out of the Lodge that night was not the good Cooper.

Hawk remembers that Doc Hayward and Harry saw Cooper and Annie came out of the Black Lodge that night and brought him over to the Great Northern.

New Truman talks to him on the phone

His character has cancer

Andy finds the truck that killed the boy

The owner of the truck is really scared

Nice! Truman’s computer pops up on his desk!

Look at that! Doc sure is old!

“That morning he was acting mighty strange. Took him to the hospital. He snuck out of intensive care, fully dressed. I called out to him. He just turned and walked away.”

“I thought he was looking into Audrey Horne, that terrible business at the bank.  She was in a coma.”

“Keep working the sunny side of the river, doc.” Truman

She wants to verify whose fingerprints were sent to them

She assumed they got them from a crime scene

But they show her the headless corpse

“It would sure help our investigation to know who this is”

“It’s not just prints this time. There’s a body. It’s him”

“The head is missing and he’s the wrong age.”

Some mysterious man is seen walking down the corridor

Could Briggs have been in another dimension like Cooper and didn’t age? 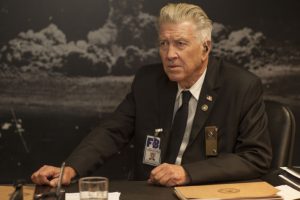 Picture of a mushroom cloud behind him

It didn’t go well with Diane

“She needs to see him” Gordon says 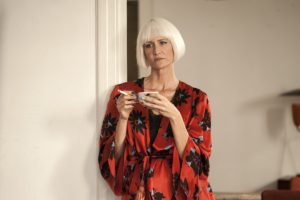 “Fuck you too, Albert”

She brings them coffee

They need her to see Cooper

Identical but not quite the same

The prints are backwards, reversed

Love the picture of Evil Cooper in front of his house in Rio! 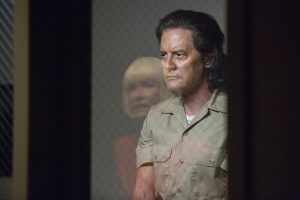 Diane agrees to speak with Cooper for 10 minutes, alone

“I knew it was going to be you.  It’s good to see you again, Diane”

“When did we see each other last?

“Are you upset with me, Diane?

“When was the last time we saw each other Cooper?”

“That’s right. Do you remember that night?”

“I don’t know what you mean, Diane” 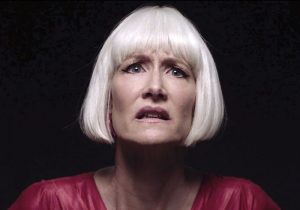 She is shaken.  She lowers the shield

Outside she tells Gordon

“That is not the Dale Cooper that I knew.”

She starts crying and hugs Gordon 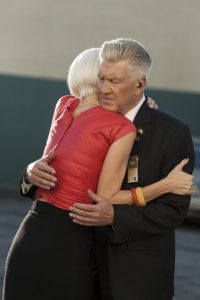 He doesn’t put his arms around her

a la Cary Grant in North By Northwest 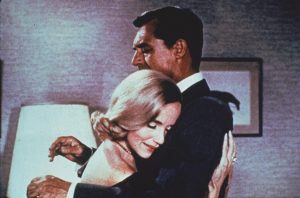 “That last night you mentioned in there. Something I need to know about?

“You and I will have a talk about that.”

Cooper gets taken back to his cell

“Tell Warden Murphy I have a message for him”

“Tell him we need to speak about a strawberry”

Evil Cooper is brought to see the warden

Cooper has something on the warden

He wants a car for himself and Ray Monroe

Dougie and his wife get interviewed by the police

They want to know about his car

“Dougie, was your car stolen?”

Dougie’s wife is a real pistol

The car was found

They seem satisfied he wasn’t involved in any funny business 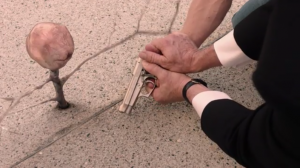 The tree with a head appears

“Squeeze his and off!”

Dougie’s wife jumped on him

Dougie whacked him in the neck and he ran away

A chunk of skin was left on the gun

There’s a humming in the office

They try to figure out where it’s coming from

She tosses him the room key that came in the mail

“This is an old one. We switched to cards over 20 years ago”

“That was the room where Agent Cooper was shot”

“That my dear is a long story”

Her husband appears to be very ill

We watched this guy sweep for a long time

Bartender answers and seems to be dealing in escorts, young ones

This guy is a Renault

A guard appears with a flashlight

Ray comes to meet him

They walk out of the prison

A guard escorts them out

A car waiting for them, he gives them a cell phone

The warden watches them drive away

We see a sky POV of the forces around Twin Peaks