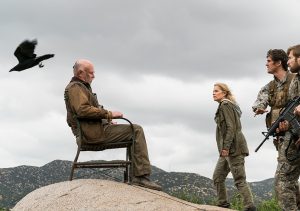 “Bukowski is a deal breaker”. My friend Charlotte said this when Jake Otto made a gift of his copy of Bukowski’s book ‘Burning In Water, Drowning In Flame’. Apparently, Alicia felt the same way, at least at first.

A very strong episode in the ongoing strong third season. It was a smart move to get The Clark family unit back together and centralize the action on them. Also, bringing back Daniel Salazar and teaming him up with Strand was smart. I really felt bad about how The Rosarito Hotel was lost though. It seemed like a great place to build a community (I love hotels). I blame Madison for that. Turning on the lights brought Travis yes and doom. Alright, bygones. Let’s talk about this episode. 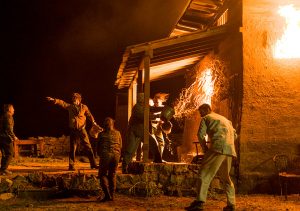 The opening scene was amazing. The old couple Nick saw dancing a couple episodes ago are in their home. The old man awakes to see his wife up. She turns and walks to him. She starts making walker growls. She must have died in her sleep and turned. He grabs her and she goes for his neck. But her teeth are in a glass by the bed. He starts dancing with her and singing. He reaches for a gun and puts it to his head. He pulls the trigger and the bullet kills them both. As they fall they knock over the lamp and a fire starts. This was a very scary and moving scene and a great way to open an episode. 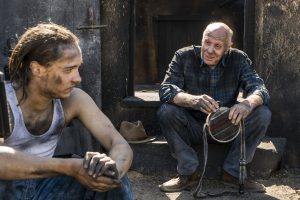 “Save the water…let it burn.” Jeremiah

Nick tries to clean up the burned house that the old couple lived in. Jeremiah comes along and Nick hands him a photo of the couple that he found of them when they were very young. The couple were part of the original people that started the community and were good friends with the Ottos. Jeremiah finds the gun in the debris and calls it ‘beautiful’. Nick begs to differ. Jeremiah explains the craftsmanship is what is beautiful. Jeremiah also let’s Nick know he sees the dilemma he’s in. “Your mama wants you to stay and your lady wants to leave.”

These are good scenes. Nick learns that the house was the first to be built on the property and was the Ottos original home before the 2nd Mrs. Otto came along and wanted a bigger, grander home. He also learns why Jeremiah gives Troy so much leeway. He feels guilty about not being there for him when he was a child due to his alcoholism. I’m like Jeremiah. I hope he turns out to be a good guy. 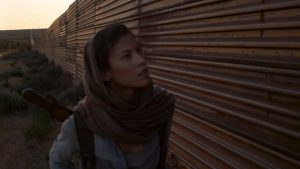 Luciana wants to leave. She doesn’t like it there. I mean, these are the people that killed most of her friends at the end of season two. Still, you have a new family here and a safe place for now. Where does she want to go? Nick plans a romantic evening in the old couple’s home that he’s renovating. She can see that he wants to stay and so she gets up in the middle of the night and sneaks off. Nick awakes in the morning to find her gone. Jeremiah comes by and hands him the Colt gun that he found earlier. He has cleaned it up for him and it looks beautiful. 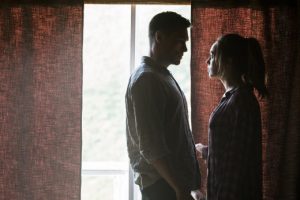 “We are strangers in an empty place, we are kings in our little empire.” Jakes notation in the Bukowski book.

Alicia goes up to the big house to see Jake and apologize for being a jerk with him earlier and tell him she was sorry about the old couple. Before you know it they’re all over each other! We all saw this coming right? When Jake offers her the Bukowski book after sex instead of a cigarette Alicia tells him thanks but no thanks. She used to be into artistic things before but since the Apocalypse what’s the point. Later on, Jake takes her to a pond and tries to explain to her that even in the Apocalypse, you need to appreciate art and be open to the moment and enjoy what life still ahs to offer. We see Alicia jump off a ridge and into the pond and she feels exhilarated and laughs. Enjoy it while you can, Alicia. 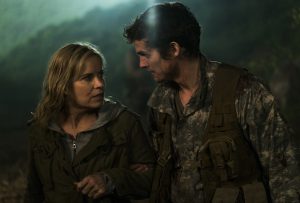 “The more we understand this family, the safer we are.” Madison

Madison goes off with troy and his squad to find the previous team that went looking for who shot at the chopper. Madison tells the concerned Nick and Alicia that she’s going not only to contribute to the community but also to find those who killed Travis. One of the men let her know that he thought she was in over her head and not prepared to deal with the new realities of the world. Madison shut him down hard. She’s an old pro at killing walkers, my friend. 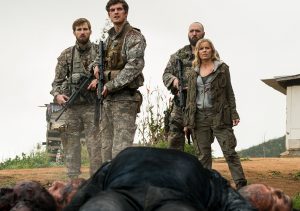 On the road they come across an overturned prison bus and a group of prisoner and guard walkers. They could easily just drive past this but Troy sees an opportunity for ‘sport’. So they amble down the road and start killing walkers. Madison is holding her won but gets in a sticky situation and the guy that was bad mouthing her earlier helps her out with his bow and arrow (no Daryl that’s for sure). He sees enough to apologize to her about doubting her skills. 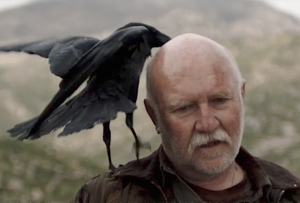 They find the missing group and it’s not pretty. They been killed and burned in a pile. The group leader, Bill, is sitting on a hill, reciting some lines over and over, “As I was going up the stair/ I met a man who wasn’t there/ He wasn’t there again today/ Oh how I wish he’d go away”. There is a crow sitting on his shoulder and it’s eating at his brain which is exposed in the back of his skull. Yikes! This is pretty gruesome. Madison puts him out of his misery but then they turn to see who is to blame for all this. A group of native Indians led by a man called Walker. Walker tells them that they are trespassing on their land and that the Broke Jaw Ranch is also their land and that they all must leave or else they’ll be fed to the crows just as ole Bill was. They allow them to leave but not with their weapons, vehicles or shoes.

On the trail back to the ranch Madison and Troy have a confrontation and Madison eggs him on by bringing his momma into the conversation. Ouch. She wins the argument though and Troy allows them to rest until sun up. Madison wakes from her sleep later on to find that Troy has a knife at her throat. She doesn’t scare though and he resists killing her. One of the others sees this happen and Madison sees that. Maybe this will help her later, if it comes between following her or Troy. 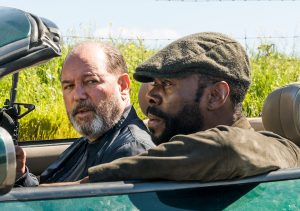 “Let’s see how you get out of this one.” Daniel

Strand has gotten himself in a pickle. He has Daniel thinking that Ofelia is waiting for him at The Rosarita Hotel. So he’s driving him there knowing damn well she isn’t there and that he isn’t welcomed there any longer. Daniel does not trust him on bit. Once they get to the hotel, at night, of course, the gates are wide open. Not good and Strand knows it. They drive in and enter the hotel. It has been overrun by walkers. Daniel calls him on his lie and Strand confesses that they were there but Ofelia took off on her own. Daniel runs out, gets in the car and drives away leaving Strand to fend for himself. Damn, that’s cold. 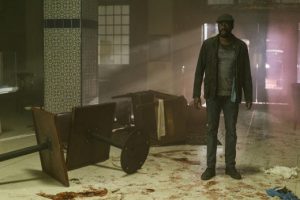 We all know Troy is nuts but can we be sure that Jake isn’t crazy as well? And Alicia may have to be the one to put him down eventually.

Madison has gotten really tough! You can see that she’s planning to take over the community. She’s setting herself up as reasonable and capable and showing up Troy for the unstable psycho that he is. 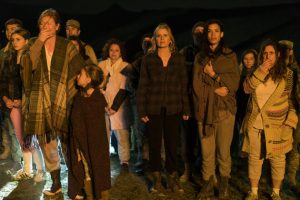 I love that Alicia was hungover from ‘bible study’.

The lines that Bill kept reciting were from a William Hughes Mearns poem from the late 1800s called “Antigonish. It was about hauntings in the town of Antigonish in Nova Scotia.