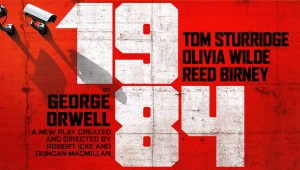 I read the book a long time ago, probably when I was 18 or 19, as one would. It was a fascinating story and an amazingly thought out imagining of a dystopian society. Then I saw the film version with John Hurt and Richard Burton. It was one thing to read it but to see it visualized was really terrifying and depressing as hell. 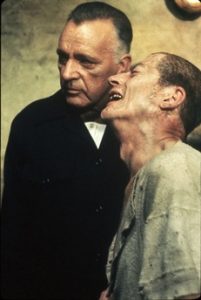 The book has inspired many other books and films about a dark future where governments have become sinister. It makes sense that the story would be back on people’s minds considering the current state of the United States government and media. It’s a frightening time. 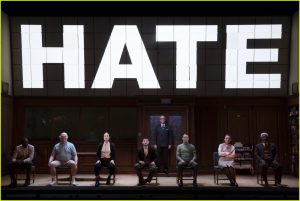 Adapted from George Orwell’s 1949 novel, Robert Icke and Duncan MacMillan’s stage version debuted in London in 2014 and is now in previews at The Hudson Theater on Broadway. The story takes place in Oceania and where there is always a war going on and the government is always watching you and listening to everything you say. ‘Big Brother” is watching. The ‘Thought Police’ are in charge and those that commit ‘thought crimes’ are arrested and rehabilitated or erased from existence – ‘nonpersoned’. Winston Smith (Tom Sturridge) works in the Ministry Of Truth, where he alters government records and newspapers to reflect the truth that the government wants people to believe. But he does not like what he’s doing. He secretly hates Big Brother and longs to join the Brotherhood, a fabled rebel group led by the much hated Emmanuel Goldstein. Things take a serious turn when he begins a secret relationship with a co-worker, Julia (Olivia Wilde) , who feels as he does. They go down a path that leads them to O’Brien (Reed Birney) and Room 101. In other words, this story doesn’t end well. 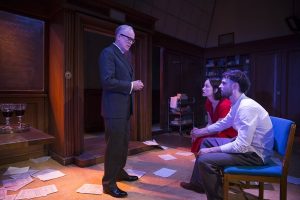 I was very interested to see how they would attempt to bring this story to life on the stage. Icke and McMillan manage to convey a creepiness and coldness very well in the opening scenes. They create a very disorienting atmosphere and place in Winston’s shoes. The audience is trying to sort it all out just as Winston is. They use one main set with a giant overhead video screen which is very cleverly used. They also use video cameras during the show which was very effective. Towards the end there is a big set change which is impressive. The lights and sound play a big part in the show as well. If you get disoriented easily be warned. There are a lot of strobe light and flashing light effects. There is also some very graphic violence and scenes of torture. It’s very effective, very intense and very necessary to the show. The show started a little slow for me, I had to get my bearings and find the show’s rhythm but once it hits its stride it’s very powerful. 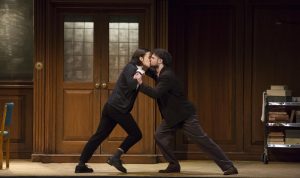 Tom Sturrdige is good though didn’t make much of an impression, in the first half especially. Reed Birney is eerily normal as the sinister O’Brien though there is a little girl on stage that may even be scarier. Olivia Wilde really owns it. She attacks the role, Sturridge and the stage with a fury. She makes a memorable Broadway debut indeed. 1984 is as timely as ever but maybe not as disturbing as before and that should disturb all of us.

Previous THE HERO Next FEAR THE WALKING DEAD RECAP S3EP5 BURNING IN WATER, DROWNING IN FLAME