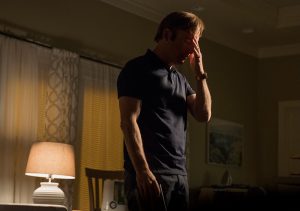 The season finale saw something click in each of the characters (except Mike). For Jimmy, Kim, Chuck, Hector and Howard, the season had been building to a breaking point and each one met theirs in different ways.

The cold open was short and sweet. Another flashback, going way back this time to young Chuck reading The Adventures of Mabel to little brother Jimmy in a tent in their backyard. Little Jimmy impatient to know what’s going to happen and older brother telling him to be patient and continue reading. 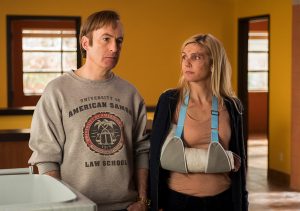 Kim is in the hospital getting a cast put on her arm. Jimmy comes in looking very worried. They drive to where the accident happened and Jimmy tries picking up all the papers while Kim sits in the car.

Jimmy and Kim relax at home. Jimmy is looking after her, fixing her food and pouring her Gatorade cause she needs those electrolytes.

“You’re not feeding me, Jimmy. There are lines we do not cross.” Kim tells him.

Jimmy says they should sublet the office. Kim asks if he’s ok with that.
“Considering everything that’s happened I don’t give a shit about the office.”

Jimmy blames himself for Kim overextending herself and almost getting herself killed. But Kim owns it. “You didn’t make me get in that car. I’m an adult. I made my own choices.”

Jimmy puts his hand on her shoulder and tells her he’s going to fix things.
Kim kisses his hand in the tenderest moment I think they’ve shared.

Francesca brings Kim work from the office, there’s a meeting coming up to open a new Mesa Verde branch. Billy Gatwood has sent her flowers and steaks! Francesca has made some calls and tells Kim that they can still meet with the regulator concerning Gatwood Oil on Monday and get in before the end of the quarter. Kim starts to look at the work in front of her, getting back on that merry go round when she just stops. She has a look like she was in the ‘fog of war’. A switch turned.

“I’m going to need you to cancel Gatwood and push everything else.”

Then she has Francesca take her to Blockbuster where she proceeds to rent 10 videos while Francesca tells Billy Gatwood on her cell that Kim can’t finish the work for him due to the accident. Maybe Kim has decided that work isn’t everything, that she needs to enjoy life first. What will this mean for her? Will she keep Mesa Verde at least? 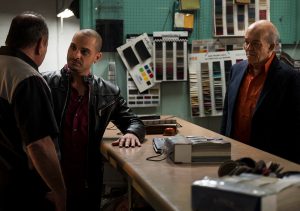 Hector shows up at Nacho’s dad’s place of business.
“Where’s papi?”
Nacho walks him through the operation and assures him that he will handle everything. But then Hector spots him and walks over.
“Relax. We’re friends.” Then he counts out 3 piles of money.
“Please, get out of my store” Nacho’s dad says very quietly.
Nacho does everything he can to convince his dad to go along. He reminds him about his wife and the twins and even his mother’s family in Mexico. Reluctantly his dad picks up the three stacks of money. But Hector is not happy.

Later that night Nacho waits in his car, gun on the seat beside him. Hector pulls into the parking lot. He’s going to kill him! He doesn’t have a clean shot. Before he can go inside to finish him the rest of Hector’s guys show up. “Good. You got my message” they say to him. Nacho is completely in the dark. Hector comes out. 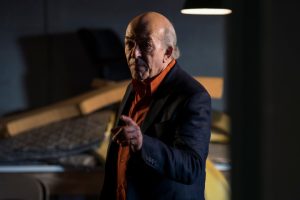 Gus Fring arrives with Don Bolsa. “Don Eladio wanted me to speak with you face to face”, Don Bolsa tells him. He tries to assure Hector that even though they’re going to move everything through Fring that it means no disrespect to Hector. Hector loses it. 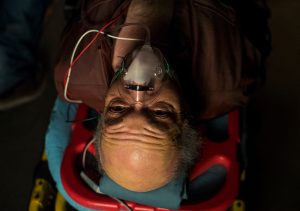 Hector has a seizure. He takes his pills but of course they do no good. He collapses. Fring tries to perform CPR. Nacho does nothing except let a little smile slip out. Hector dropped the rest of the pills on the ground. Nacho picks up the pill container. When the ambulance shows up they ask if he was taking any medication. Hector hands her the pills, the real ones I assume. Fring looks at him. He knows. 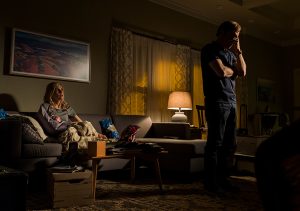 Seeing what happened to Kim Jimmy tries to make amends and goes to see Mrs. Landry. He brings her some pastries, some balloons and toys for her cats. But she’s not happy. The ladies are still mad at her. Jimmy meets with the ladies at the mall trying to reconcile things. But it’s not going to happen.

Jimmy comes home and sees Kim on the couch.
“How’s relaxation 2003 coming along?”

Kim has just been watching videos all day and is prepared to watch To Kill A Mockingbird again if Jimmy wants even though she watched it that morning. Jimmy tells her about Mrs. Landry and the mess he made, And then a realization comes over him. He knows what to do but he doesn’t want to do it. 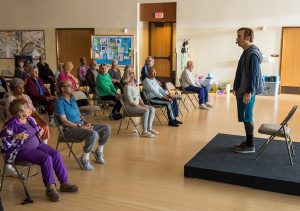 The next morning Jimmy shows up at the Sandpiper home to lead chair yoga. Erin from Main and Davis shows up and demands to speak to Jimmy. They have a big argument over what Jimmy did to manipulate Mrs. Landry into settling. But Jimmy still has his mic on so everyone can hear them. Of course Jimmy did it to mend things between Mrs. Landry and her friends even though they will all now hate him. That’s the end of his elder law days. 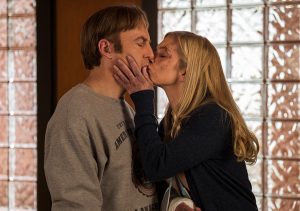 Jimmy and Kim and Francesca pack up the office and load up a truck. The office is no more. But Kim is optimistic. They’ll find a way. She seems happier than ever and even more committed to be with Jimmy. 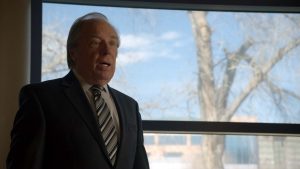 Meanwhile, Chuck faces off with Howard and the rest of the firm at HHM. Chuck lays out the firm’s options, all of which are bad. But they could just let bygones be bygones and move on as before with Chuck as a partner and continuing to practice law. Howard clears the room. Howard won’t have it. He explains to Chuck that he feels betrayed by him. He had always supported him and deferred to his judgment but his personal vendettas had gotten out of hand and he put himself above the firm. He hands him a check for $3 million. The first of three installments. “The firm can’t afford that.” Chuck says. “I’m covering it mostly from my own private funds and some loans.” Howard tells him. He calls Chuck’s bluff. A switch turned for Howard. He decided he and the firm would be better off without him.

He then gathers the entire firm in the lobby and announces that Chuck is leaving HMM. He asks Chuck if he has anything to say but Chuck remains silent, perhaps in shock. They applaud him out of the building. Chuck’s career is over. His legacy in tatters. 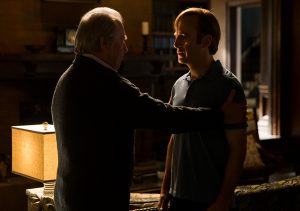 Jimmy goes to see Chuck. He wants to make sure he’s alright. He’s on his ‘make amends’ tour and at the end of the day he’s always loved his brother. Chuck lets him in. Jimmy sees the frig plugged in, lights are on, music is playing. The windows are open and sunlight coming in. Jimmy is stunned.

“I always told you I’d get better you just never believed me.” Chuck tells him.

Jimmy tells him that he would have done things differently given the chance.
“Why have regrets at all? What’s the point? Look at you. You’re in such pain. Why bother? You’re just going to go on hurting people. If you’re not going to change your behavior, and you won’t, why apologize?” Chuck tells him.

“I don’t want to hurt your feelings but the truth is you’ve never mattered all that much to me.” Chuck tells him void of all emotion. Ouch.

Jimmy just walks out. He stops and turns, thinks about saying something and then changes his mind and leaves. Nothing left to say. 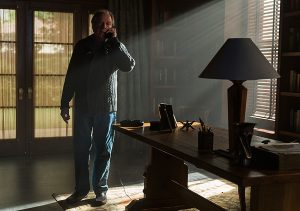 Chuck wakes up in the middle of the night from tossing and turning. Perhaps his conscience getting to him about what he said to Jimmy. He pops a pill and makes a note in his journal. Then he gets up and goes downstairs and shuts off all the breakers in the house, the house goes black. He lays in bed in complete darkness. A switch has turned in him as well.

The next day Chuck notices that the power meters are still turning even though he’s turned off all the breakers. He calls the electric company to have someone come and check to see if something is still on in the house but they can’t send anyone out for several days. He goes around looking for what may still be on, flipping switches off and on. He removes all the light bulbs from their sockets but the meter is still running. He cancels his appointment with Dr. Cruz and then unplugs the phone from the jack. The meter is still moving. He moves around the house, feeling the walls, trying to feel the source of the electricity. He starts ripping the walls apart. This is a scene right out of The Conversation (1974). He rips the house apart and just when he thinks he pulled out the wire causing all the trouble he checks the meter and it’s still running. Only one thing left to do. Take a baseball bat to the meter. All the switches have turned off in Chuck.

As the episode ends we see Chuck sitting in what’s left of his house. He’s kicking his desk. Why? There’s a camping lantern on the desk. He keeps kicking the desk eventually knocking the lamp off the desk and setting the house on fire. 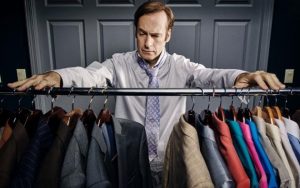 Jimmy said at his disbarment trial that those lanterns would dangerous and could start a fire.

Francesca go her job back at the DMV and Jimmy said when they get a new office she would be the first one they call which did not seem to thrill Francesca. Oh if she only knew her future would bind her to Jimmy.

Chuck’s suicide is going to have a big impact on everyone next season. Perhaps this is why Jimmy stops going by McGill finally?

I love that Steal Away by Robbie Dupree is playing in the background in the mall. I love that song.

Well, that was an excellent season. I think the stage is set for Jimmy to go full Saul next year. How will Kim adjust to that? How long will she hang around? Does she always stay with him? That might be interesting. And we never saw what happened to Gene! I guess that will have to wait until the cold open of Season 4.

Previous FEAR THE WALKING DEAD RECAP S3EP4 100 Next THE HERO