Welcome back, Daniel Salazar! And welcome back Ruben Blades! Both the character and the actor will make this show even better and I’m happy that they’ve returned. Daniel is alive but he is still guilt ridden about his former life and for failing his daughter, Ofelia. He seeks judgment for his sins. Can he find redemption?

I also love the all Spanish episode we got last night. FTWD seems to be taking some risks and experimenting with new things this year. The show really feels like it’s coming into its own this season. 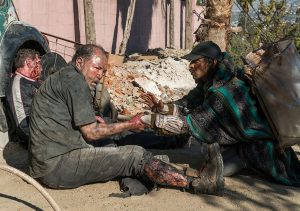 When we first see Daniel he looks like a walker. He’s dragging one leg, he looks a mess.
He gets attacked and can barely manage to crawl under a car but he can’t protect himself. Fortunately, Efrain (Jesse Barrego) comes along and saves him. Efrain is somewhat of a holy man among the ruins. He sees killing the walkers as acts of mercy and he blesses them with water and then drives a nail in their heads. Efrain puts Daniel in his bike and peddles through a group of walkers to his hideout where there is a fountain that water comes out of each Tuesday at 5pm. Efrain takes the water around to people who need it. Efrain then takes Daniel to Lola (Lisandra Tena) and some friends and they tend to Daniel’s burnt leg. Oh Lord! When they scrape of the infected skin with a razor I may have screamed louder than Daniel does! 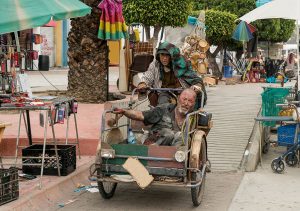 Efrain takes Daniel under his wing and I wasn’t quite sure if he was to be trusted or not. But it turns out he is and Daniel is grateful. He even gives him a haircut! I forgot that Daniel was a barber. Daniel assumes that Efrain was a priest before the apocalypse and he gives his confession to him. Efrain can see that he carries a heavy weight. Daniel tells him about his time in El Salvador and that he had killed 96 people but Efrain feels something more gnaws at him. Daniel tells him what happened at Celia’s farm and that he was not in his right mind. When he came to his senses the place was on fire. He thought he heard his daughter’s voice and he managed to survive but he fears that his daughter did not and that he is to blame. He asks for forgiveness. 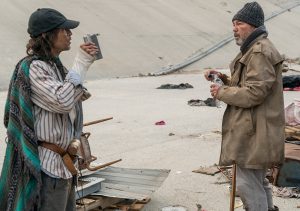 Daniel sneaks out in the middle of the night and immediately runs into walkers in the reservoir. He handles one but comes across a giant of a walker. He hits him with his crutch but he was too big. Daniel kneels down and seems to accept that he will be killed and that he may deserve to die. But just then a bolt of lightening strikes the walker in the head! Great effect! Daniel is knocked out and floats down the reservoir where gets collected in a sewage pipe by people at the dam. 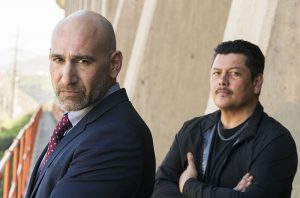 “This may be the apocalypse, but it’s not communism.” Dante

Daniel washes into the dam and is quickly looked after by Lola who turns out to be a supervisor in water treatment and in cahoots with Efrain, diverting water to the fountain. Water has become a huge commodity and Dante has taken control of the dam and sells the water to the masses. Lola gives Daniel a job which draws the attention of the chief security office/goon. At lunch this goon tries to mess with Daniel. He sticks his finger into Daniel’s spam! Daniel goes into automatic and attacks this guy, knocking the gun from his hand, his old military training springing back to mind. Dante notices this and Daniel doesn’t lie when asked where he’s from. Dante looks into the inside of Daniel’s lower lip. He has a tattoo – “SN” – ‘Sombra Negro”. It signifies he was part of El Salvadorian death squads. Dante can use a man like Daniel and asks him to work for him, specifically to seek out those who have been stealing the water. 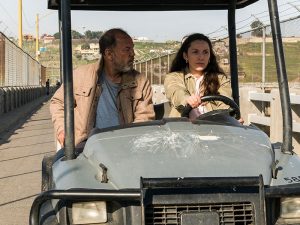 Daniel goes out with the goon patrol and they find the place where Efrain has been staying. They don’t find him but Daniel notices that it’s almost 5pm and the water will be coming through the fountain. Daniel diverts their attention to Efrain’s hiding place. 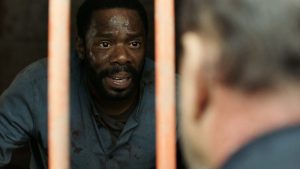 When Daniel comes back to the dam he notices that Strand has arrived looking for Dante. This is what we saw last week. Daniel visits Strand in his cell and gives him the canteen. Strand tells Daniel that Ofelia is alive and waiting for him at a hotel in Rosarito. He just needs to get him out of there, get a car and they could be there in less than a day. But Daniel doesn’t believe him. He’s gonna let him rot in that cell.

Lola is furious with Daniel but he says he did it to protect the fountain and her. When Dante sends for Daniel to torture Efrain, to get him to name the others involved in stealing water, Daniel is faced with a tough decision. Lola is also in the room and terrified. Daniel leans in close and says, “Forgive me”. 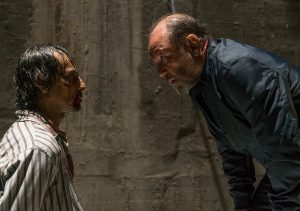 “Again, brother?” Efrain says. Daniel explains that if he talks they will kill him and Lola but if he doesn’t he promises to kill him quickly. Efrain understands and then takes some vicious beating from Daniel. Lola breaks and puts an end to the violence by giving herself up. 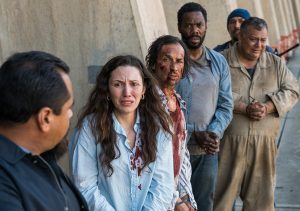 The next thing you know everyone is up on the dam and in line to be tossed off, including Strand. Dante tosses off one of the janitors that worked for Lola and then calls Lola over. Daniel walks her over to Dante. Now I’m wondering what Daniel is going to do. Does he go through with this? Does he feel he is damned? I’m really not sure. But Daniel goes into action. He shoots all Dante’s goons and Dante. He cuts Lola loose and hands her the gun. He kneels down in front of her.

“Forgive me” he says. She takes his hand. He is spared once again.

Phew! That was a very intense episode and a very satisfying one. 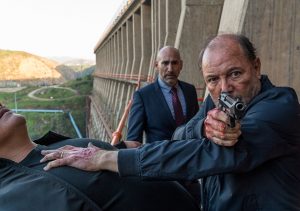 Jesse Barrego has been around a long time! I remember him from the TV show Fame from the mid 80s and he was also in one of my favorite films Lone Star (1996) written and directed by John Sayles. 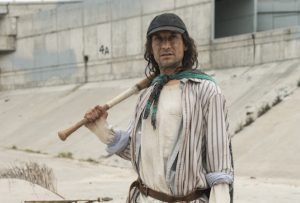 Where is Ofelia!  Everyone has been asking this all season! But it looks like we’ll see her soon.  I imagine Daniel will set off looking for her and take Strand along for the ride since he was the last one to see her alive.  That should be a fun! Talk about odd couples!