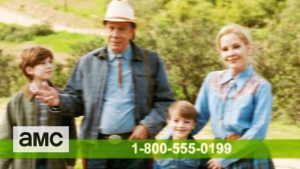 “Our country is ablaze. If only our ancestors could see the chaos of modern America.” Jeremiah Otto

The clever opening of this episode was terrific. It opens with a grainy video. One you would see late at night on some local cable channel. It shows Jeremiah Otto (Dayton Callie) talking about 9/11 and warning people of ‘foreign nationals’ and that the ‘great American experiment has failed’. Jeremiah put out a 4 part video telling people how to prepare for ‘TEOTWAKI’ which stands for ‘The End Of The World As We Know It”.
We see his wife and two young sons (Jake and Troy) by his side. “If you’re going to plan for a future plan for a better one!” So the Broke Jaw Ranch is what came from his preparations. 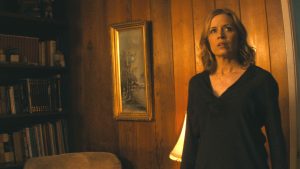 The community hold a service for “Charlotte’ Jake’s co-pilot on the chopper who also happened to be Jeremiah’s goddaughter.  Madison took the opportunity to offer her condolences and also eulogize Travis. “He was our compass” she says. She is determined to make it work here even though some of the others are giving the Clarks the stink eye. When she returns to the housing Jeremiah provided them (bunk beds) she finds Troy tucked in to Nick’s bed waiting for her. He is smitten alright but Madison seems to know how to deal with him.  She gets him to leave without incident but as he exits she throws in “That was made this morning, Troy”. Troy obediently follows her instruction and makes the bed.

Madison goes to Jeremiah and Jake to complain about Troy and asking for help getting the others in the compound to accept her and her family.  Jeremiah tells her that they need to earn their trust on their own and tells Jake to show her the 4 part video that we saw a part of in the opening. Jake assures her that he will make sure that Troy doesn’t bother them and she sits down to watch the videos. She also finds a video of outtakes that show that Jeremiah’s wife was erratic, an alcoholic and Jeremiah yelling at the kids.  He walks in as she’s watching this and explains that he and his wife both had booze issues and that she passed away before the apocalypse happened. He explains this is why he’s more lenient on Troy, the younger son.

“We will build something better than before. It won’t be easy Madison, do you think your family’s up to it?” Jeremiah
“Absolutely.” Madison replies.

She further tries to ingratiate herself to the community by volunteering to join a search party. It seems that the team that was sent to one of their other outposts (How many do they have?) never returned. 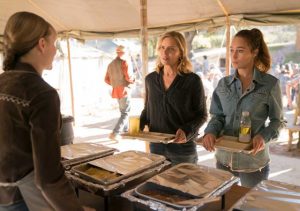 Alicia gets the best scenes in this episode as far as I’m concerned. As they are in line to get their breakfast, a young girl named Gretchen invites her to join their bible study group that evening. Alicia tries to get out of the invite graciously.

Nice try, Alicia. But when Gretchen leads Alicia down into a bunker where the rest of the bible study kids are she and the audience is pleasantly surprised to find that this was just a meeting of teen age kids getting high with home made bongs and booze. The bible study leader is Geoff, a severed walker head they keep in a birdcage. It triggered flashbacks to the other TWD show and the Governor’s museum of walker heads. Geoff’s mouth is still moving and making walker sounds.

“Geoff has a question for you. What’s it like out there?” Gretchen says.

Alicia thrills them with her description of the outside world and how she’s actually killed a person. She warns them about Troy.

“You can’t rely on the Troys of the world,” she says. “Sometimes you have to handle your own shit.”

She’s their new hero. And mine!

Nick can’t help being Nick. He wants to go. Luciana (who’s recovering nicely, thank you) also wants to go. But even though Nick doesn’t like the place or trust anyone, he trusts his mom. At least, for the time being. She also tells him to stay away from Troy. So what happens? Troy invites him along for some night hunting and sure enough Nick hops in the car and off they go.

Of course, while out in the woods Troy and Nick are really hunting each other and Nick gets the jump on Troy. He pulls out a gun and fires at Troy! I thought for a second that he actually had killed him but no, just playing around. Then the boys tussle and have a roll in the dirt.

“I think we can be friends now.” Troy says laughingly. It makes some sense. These are two messed up kids around the same age. Of course, they’re going to bond. I don’t think Luciana is going to like this one bit. 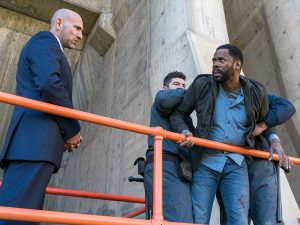 Meanwhile, Strand has a plan. He sets out to find an old business associate of his and Thomas’ from before the apocalypse started. He arrives at a dam where hundreds of people are lines up for water. He’s looking for a man named Dante and he finds him. They reminisce about the old days over a few drinks. But then Dante wants to show him something. On the dam. Once out there, Dante’s henchmen have a guy sitting on the railing. Apparently, this guy displeased Dante. So they throw him off the dam and he lands on a huge pile of bodies or I should saw, walkers, who immediately start devouring this poor fellow. To his utter surprise, it seems Strand is next! It turns out Dante may have been an associate but he wasn’t a happy one and now He is in charge and Strand will do what He says. Strand gets tossed into a cell. Someone tosses him a canteen of water. And lo and behold, that someone is Daniel Salazar! 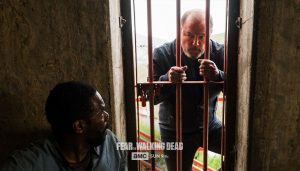 “I told you I’d be your guardian angel” 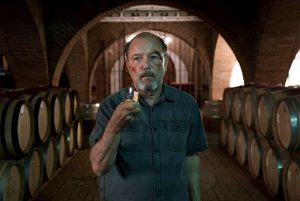 Now is Daniel an angel?  A figment of Strand’s imagination?  Is he that dehydrated? My feeling is no, Daniel is alive!

Did you notice Madison choosing to sit next to Troy instead of Nick and Alicia? Then she placed a napkin on Troy’s knee? She is one smart cookie. She is not only flirting with Troy but acting like his absent mom. Also kinda creepy.

Who shot at the chopper? And why? A rival survivalist group? 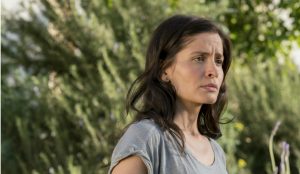 Where is Ofelia? I thought she was going to get captured by border patrol militia as well. Perhaps she’s with this other group that was shooting at the chopper.