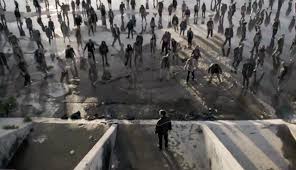 Season 3 started with a bang! FTWD hit the ground running and it felt almost like a reset of sorts. I very much like the direction the show is taking even though we lost a major character right off the bat. It was shocking! I was stunned but I understand why it had to happen and it really sets the table for how the other characters will be affected by it and really the trajectory of the whole show.

Season 3 started with a bang! FTWD hit the ground running and it felt almost like a reset of sorts. I very much like the direction the show is taking even though we lost a major character right off the bat. It was shocking! I was stunned but I understand why it had to happen and it really sets the table for how the other characters will be affected by it and really the trajectory of the whole show.

EPISODE 1 – EYE OF THE BEHOLDER 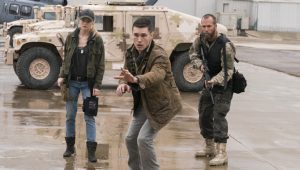 The militia that wiped out Luciana’s people at the end of last season is front and center as we start season three. Travis, Madison and Alicia have also been captured by the militia but Travis is separated from the women because he looks Mexican (Maori, you bastards!). He gets put in the basement where he discovers Nick and the wounded Luciana. The militia is experimenting with the darker skinned prisoners. They are killing them and timing how soon they turn. 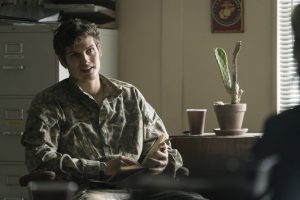 Creepy young militia leader Troy (Daniel Sharman) calls it ‘science’ but its pure racism through and through.  Troy is a sadist and the new big bad. But he does have a sweet spot for Madison. Lucky girl! 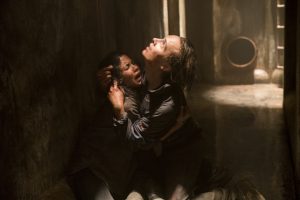 Travis and Nick meet a friendly in the basement and they plan an escape. They get out of the basement but Travis lags behind to slow down the militia men allowing Nick and Luciana to climb down into the sewer.  Their new friend doesn’t fare so well.  He gets shot and for good measure, he gets his throat slit and dumped in the sewer so he can turn and then turn on Nick and Luciana. Luciana tries to convince Nick to leave her behind because she’s holding him up but he refuses. “Nunca!” Never would he leave her!  They eventually find a way out of the sewer but they find hundreds of walkers waiting for them. They follow them into the sewer. Great!

Troy was going to go easy on Travis in order to win points with Madison but after the escape attempt Troy decides to toss Travis in “the pit’.  The pit is a deep ditch filled with walkers! Travis has to fight like he’s never fought before! He uses cement blocks and metal rods and some good old fashioned foot stomping’! 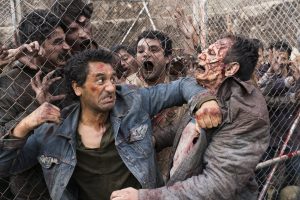 Madison and Alicia plan an escape of their own. They overtake Troy when he walks back into his office. Alicia sneaks out while Madison grabs a spoon and shoves it in Troy’s right eye! She threatens to scoop it out if he doesn’t help her escape.  Alicia tries to sneak away and runs across a grate where she sees Nick and Luciana fighting cohort now turned walker.  She drops her knife down the grate and Luciana manages to grab it and stab the walker in the back of the skull!  Alicia gets captured. Madison finds herself surrounded once outside. Troy’s brother, Jake (Sam Underwood), talks her down and assures her that he will help her find her family.  He seems to be a decent guy and unaware of what his brother was up to.  Then Alicia comes over, always an afterthought.

The episode ends with one of the militia men getting attacked through an air vent and getting sucked into the wall. These seem to be the walkers Nick let into the facility through the sewer. 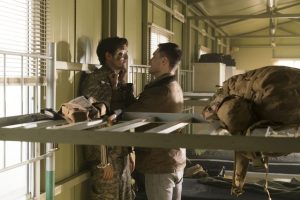 This is a really good beginning! Lots of action and we get introduced to these two brothers who are going to figure prominently this season.  Travis finally shows some bravado! 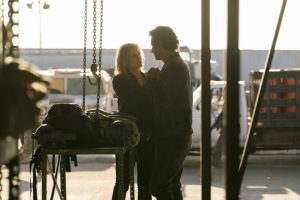 The second episode picks up right away. Madison thanks Travis for saving Nick and says she’s sorry to him for Chris.  They share a short tender moment as they prepare to move out. “I’m with you” Travis tells her. But the moment gets interrupted by a swarm of walkers coming out of the buildings.  Soon they are surrounded and separated (Again!) Madison and Nick fighting together while Travis picks up the weak Luciana and carries her to a chopper with Alicia close behind. Troy, of all people, comes to Madison and Nick’s rescue and they jump in the back of his truck. She looks over at Travis as if to say, “Sorry!” Jake is flying the chopper that Travis and company are in.  They make their escape and head to the compound that the brothers run with their father. 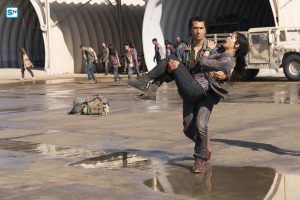 Then, tragedy strikes! The chopper starts taking fire! Travis gets hit in the neck! Whaaaaaaat??? He unfastens his seat belt and opens the door. Alicia tries to stop him but Travis knows he’s a goner and he throws himself out of the chopper!

Some have been saying he’s not dead, that he’s hiding under ‘a dumpster’ but I don’t think so. Travis is gone.  Just when he started showing real bravado, too. 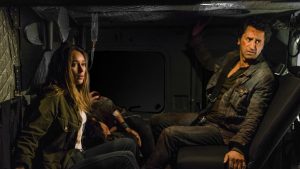 The chopper lands and Jake and his co-pilot and Alicia and Luciana try to reach the compound on foot. While standing guard that night his co-pilot, apparently a woman Jake knew from childhood is attacked and killed by walkers.  Jake has trouble using his rifle and luckily, Alicia comes to his rescue.

Two things here: 1) Jake doesn’t seem to have much experience with guns or walkers. 2) Alicia and Jake gonna get together. 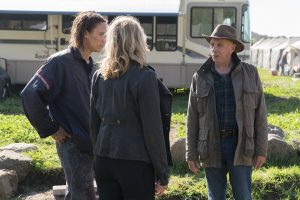 Meanwhile, the truck convoy does make it to the compound but, when they find out that the chopper has not, they make Madison and Nick wait outside the gates. Eventually the patriarch of the place, Jeremiah Otto (Dayton Callie) comes out to greet them. He asks Madison is Travis is the sort that would want to try and take control of the chopper.  Madison assures him that he wouldn’t do that, that they were together and he would want to reach the compound.  Jeremiah allows them in but he’s a little annoyed that they aren’t more grateful.  Nick doesn’t like it but Madison urges him to stay calm and trust her. She also lets him know that she secretly swiped a hand gun in case anything should occur.

The next day Alicia and Jake carry Luciana into the compound.  Luciana is close to death so Troy is more than ready to do the honors and take her out.  Nick pretends that he would like to do it and instead turns the gun on Troy.  Madison makes him give it up and thankfully, Jeremiah allows Luciana to be looked after by their medical team.  Alicia tells Madison about Travis and she is devastated.

Nick is all for leaving the place, which is called ‘Broke Jaw Ranch’ but Madison is thinking long term.  She tells Nick and Alicia that they will stay there and make it their home even if they have to take it over (shades of Rick Grimes here). 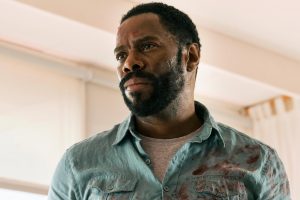 We also get to see what Strand has been up to. The hotel continues to be overrun by people trying to get in. They almost lose control when Elena and Hector are attacked through the fence. Strand then tells everyone he is a doctor and that they will let everyone in and he will treat them.  This calms the crowd and he manages to tend to the minor needs that most of them had.  But when a pregnant woman is about to give birth and he is called into action Strand balks.  He has no choice though and he manages to help deliver a healthy baby. Elena and Hector though are worried what will happen if people find out they’ve been lying about Strand being a doctor and ask him to leave. Luckily, he is asked to make one last house call on a patient that has been refusing to eat.  He takes a plate of food into the person’s room and finds out it’s the mother of the bride. She looks awful.  She apologizes for shooting him before and gives him a little present, a small box.  It was probably meant for the bride and groom. Strand opens it and looks very happy. But she isn’t and walks out on the balcony and jumps. Strand takes his leave and heads for the hotel garage.  Apparently, a set of car keys was in the box! Strand takes off for who knows where

Jake seems to be the good son but that could also mean ‘weak’ son. 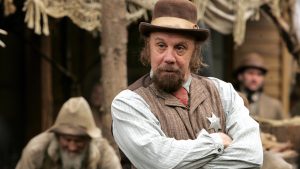 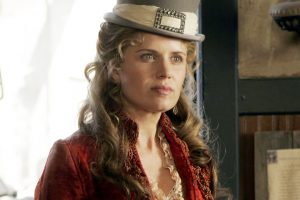 Love Dayton Callie! Remember he and Kim Dickens were on Deadwood together.  They have a nice chemistry. Is he a bad guy or not? I’m not sure yet but he’s a good actor and I like where this is heading.