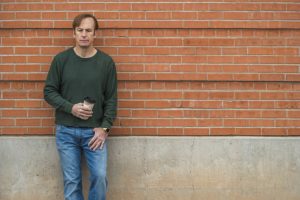 “We can make it zero,” Community Service supervisor

Jimmy starts doing his community service. Picking up trash underneath the freeway. He tries to conduct business on his cell phone the entire time and even though he collected twice as much trash as everyone else the supervisor docks his time for being on his cell phone.

He’s also having trouble selling off his pre-bought commercial time. He manages to cover the office rent for another month but he had to drain his savings and is rapidly running out of options. It gets so bad that he shoots a commercial for free for ABQ In Tune in hopes that when they see increased business they’ll buy the next spot at full price. 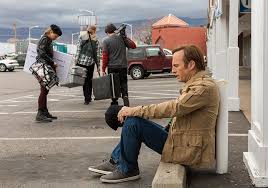 One of his video team actually tries to give him back her pay for the shoot but Jimmy refuses to take it. Saul would have taken it so Jimmy is still with us at this point. 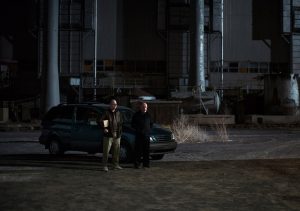 Mike gets help paving the steps of the children’s playground and meets Annie (Tamara Tunie). A love interest for Mike? Mike returns with Stacy to her support group meeting and hears Annie tell her story about losing her husband. He went hiking 8 years ago and never came back. His body was never found and she never learned how he died. 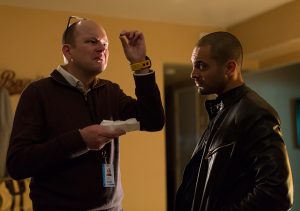 Nacho reaches out to the dork with glasses, Pryce, a call back from the first season (Squat Cobbler) Nacho will give him $20K to get him a supply of empty nitroglycerin capsules, Hector’s medication. Pryce is afraid of Nacho and asks Mike to be his security again but Mike refuses and tells him to find a way out of the deal with Nacho. For some reason, after speaking with Annie, Mike calls the dork and tells him that he’s in. When they meet to make the deal Mike gives him some good advice. “If you switch the pills then you need to switch them back.” . He tells him there’s more to worry about than Hector and he means Gus Fring.
He also asks for one more favor. We don’t get to hear the favor but I’m guessing he asks nacho to locate a body. 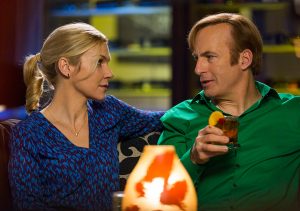 Kim meets with her friend from Mesa Verde. She tells Kim that she read the transcripts of Jimmy’s hearing and took great glee in how thoroughly they destroyed Chuck. Kim snaps at her during their meeting for which she immediately apologizes for. Kim obviously feels guilty for what they did to Chuck.

“As far as I’m concerned all we did was tear down a sick man” Kim says.

Jimmy and Kim decide to take a break from the worries of their worlds and head to a bar where they size up customers for assorted con games they could play on them. This is a nice call back to season one when they actually duped some guy. This time Kim has no intention of doing anything but Jimmy needs money. His particular scheme for some asshole chewing out a poor waiter over his sub par drink gets very dark.

“That guy’s a real asshole,” Jimmy says. “He needs to go down, hard. I’m gonna sell him a worthless credit card for five thousand bucks.”

The look on his face changes, he sneers as he tells Kim how they’re going to take this guy down. His voice is low and serious. There is no sense of harmless mischief in his manner. Kim looks at him with concern. 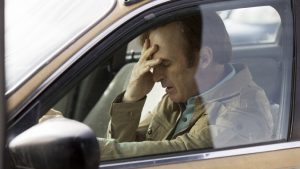 “Everything that happened was his own fault. Everything. You put him in the rear view mirror. He is not worth thinking about. Done.” Jimmy to Kim about Chuck

Jimmy goes to the insurance company to try and get a refund on the malpractice insurance he bought but no matter what angle he tries they won’t do it. On top of that, once he’s reinstated his insurance will go up by 150%. This seems to really break Jimmy and he starts crying. He starts in on how bad things have been, how his gal is disappointed in him and how he just needs a break. At this point I believe Jimmy is being sincere but when he starts talking about Chuck and how mentally ill he is and directs the insurance agent to check the transcripts of his hearing I knew he was setting Chuck up. Chuck also bought his malpractice insurance with this company, the agent let him know that earlier. He begs the agent not to take any action and that he doesn’t want Chuck to get in trouble on account of him. When he leaves the office his face turns hard and we know he wanted to hurt Chuck. This was all spite and hatred.

We’re losing Jimmy, everyone. Kim is going to be heartbroken!

Some nice call backs in this episode.

The opening shot of Jimmy leaning against the wall mirrored a similar scene from Season Two episode Amarillo. 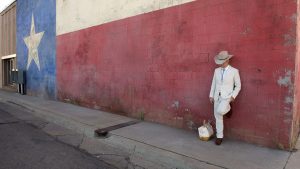 Mike checks the gas cap on Nacho’s car to see if he’s being followed. 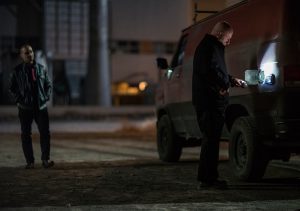 In the bar, Jimmy is wearing a green shirt. Green is the color Walter White favored as well. 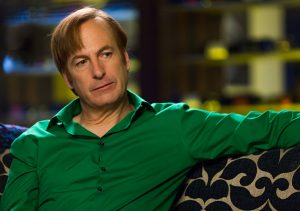 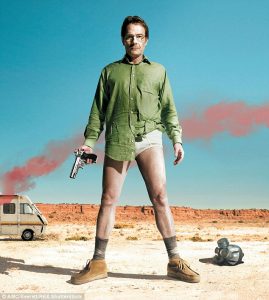