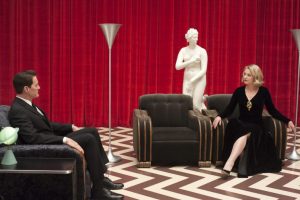 I was filled with anticipation for the premiere of the new Twin Peaks. I had re-watched many of the original episodes and was still freaked out by the final episode. The last episode of Twin Peaks was filled with cliff hangers, the most shocking was that Agent Cooper was trapped in the Black Lodge and that his doppelganger had exited carrying the spirit of Bob with him. The final scene had Agent Cooper slam his head against the bathroom mirror and repeating “How’s Annie?” several times before breaking out into maniacal laughter. That was it! That was how the show ended! In horror! 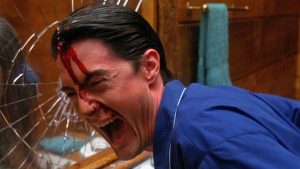 I sat and watched the new episodes with some friends and was enthralled. The pacing was deliberate, sometimes almost trance-like but this is what you should expect from David Lynch. Some might find it slow. It is. But just relax, sit back and fall into his world. Watching David Lynch is like engaging in a meditation. Just breathe and let it all in. When it was over I didn’t realize it. I was expecting another hour! My friends pointed out that it was almost 11pm! I was in the trance and I wanted more.

It was classic Lynch. It was like watching his greatest hits. Parts reminded me of the show and other parts reminded me of his films, especially Lost Highway. There is always sound in the background, not always music but sound. The camera lingers on moments longer than feels comfortable. There are times you keep wanting someone to say something or something more but what do words matter? It’s all a riddle.

How do you recap something like this? You can’t explain it. You may never understand some of it. You saw some familiar characters and were introduced to many more new ones. The story starts in The Black Lodge where Agent Dale Cooper is still trapped and leads all across the country and beyond. 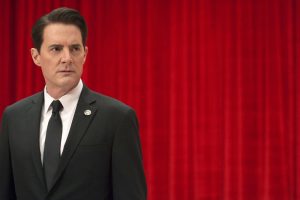 “Is it future or is it Past?” the one armed man.

Cooper is still trapped in this creepy place. But as Laura Palmer told him, she would see him in 25 years and lo and behold she was right! Laura doers appear to him and her message was as ominous as ever. “I am dead yet also I live.” She also whispers something in his ear which makes him recoil in fear. Then she screams flies away as if summoned. 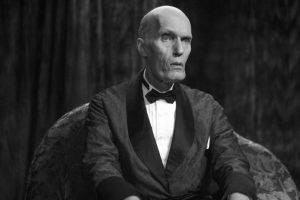 Coop also has a conversation with the Giant. “Remember: Four, three, zero. Richard and Linda. Two birds with one stone.” OK.

He is also introduced to a tree with a talking brain that the one armed man calls ‘the evolution of the arm”. This is believed to be what the finger snapping dwarf has evolved into. The tree tells him that his doppelganger needs to return to The Black Lodge in order for him to go free. But something happens. The floor gives way beneath Cooper and he falls through. 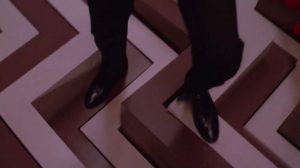 “Non Existent!” the tree shouts! He falls through space and time and lands on a glass booth sticking out of a building. He gets sucked into the booth and floats in it being shrunken and reformatted to normal size before disappearing again and falling helplessly into nowhere. 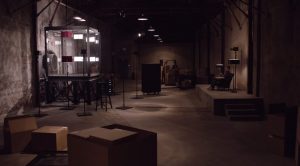 “Let’s not over think this opportunity.” Traci

This segment felt the most like typical David Lynch. A young man sits on a small couch watching an empty glass booth surrounded by cameras. He is being paid to wait and watch and see what happens. It’s very methodically shot and paced. A young woman comes to bring him coffee in the hopes that she can come in and hang out with him. She is told by the stoic security guard that she is not allowed. The next night she comes back with two coffees again. The security guard is not at his desk so the young man allows her in. It isn’t long before they start making out, getting undressed and making whoopee when something appears in the glass box. They watch transfixed as something takes shape. A woman? An alien? What is it? Whatever it is, it comes through the glass and starts to rips these two kids apart like they were logs being put in a wood chipper. Blood was squirting all over the place! Shocking scene. 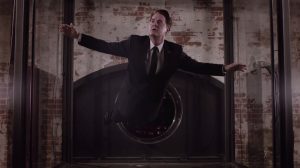 It is revealed that while the young man stepped out to greet the young woman with the coffee Cooper appeared in the glass box. When they return they see the creature that kills them appear. Did this creature follow Cooper from The Black Lodge or is it from somewhere else? 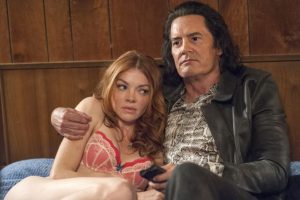 “I don’t need anything. I want.” Bad Cooper/Bob

Bad Cooper has been running free and committing atrocities for 25 years now and he looks terrible. His hair is long and greasy like the soul that possesses his body, Bob. He has a menacing stare and talks low and threateningly. He kills one person by just massaging his face and another more conventionally, pillow over the face and a bullet.

The company he keeps is gutter trash. He knows he is supposed to re-enter The Black Lodge in 24 hours only he doesn’t want to go back. He has a secretary named Chantal (Bad Diane?) plated by Jennifer Jason Leigh. I don’t know what his plan is but how can Good Cooper stop him if he is just a free floating spirit? 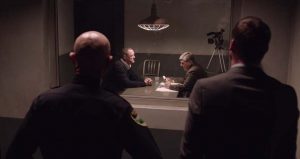 This storyline reminded me very much of the first half of Lost Highway (1997). A dead body is discovered in an apartment building. That is to say, a dead body and a severed head belonging to someone else are discovered (two birds with one stone?). The fingerprints in the apartment lead the police to mild mannered high school principle Bill Hastings (Matthew Lillard). His wife is stunned but more worried that they have dinner guests coming over later. His wife is allowed to visit him in his cell later and he confesses that he dreamt about being in that woman’s apartment but he wasn’t actually there. She tells him she knows about his affair and he counters that he knows she’s been sleeping with his friend and lawyer, George. It’s a vicious scene shot in a tight close up. It’s both funny and frightening. 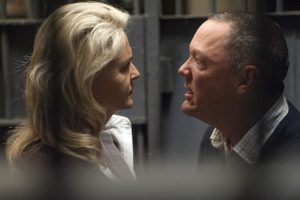 When the wife comes back home she is greeted by Bad Cooper who shoots her using George’s gun. What the hell does he have to do with all this?

“You don’t want a man like that in your life”

This was a short scene but I’m sure we’ll see more of this character later. A man hands a stack of money to his young assistant. He could be the one that was paying to have Bad Cooper killed. Cooper caught on to that.  I’m assuming this man is in debt or in business somehow with Bad Cooper/Bob. 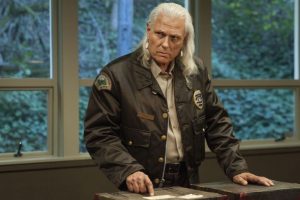 Mixed in with all this other business we get snippets of some of our favorite characters from the original show. The Log Lady calls hawk to say that her log had a message for him, “Something is missing”. He heads out into the woods and finds the spot where the entrance to The Black Lodge is and the red curtains willowy amongst the Douglas Firs. 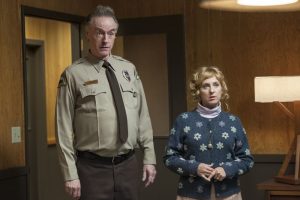 Andy (Harry Goaz) and Lucy (Kimmie Robertson) are still together and as loopy as ever!
We get to see Ben Horne (Richard Beymer) and his brother Jerry (David Patrick Kelly) discuss marijuana and business. Lonely Sarah Palmer (Grace Zabriske) watching lions rip apart a water buffalo on TV and totally transfixed and drunk. We also see Dr. Jacoby (Russ Tamblyn) now living out in the woods and receiving a special delivery of some shovels. He’s still wearing those multi colored 3-D glasses! What is he digging up? Or burying? 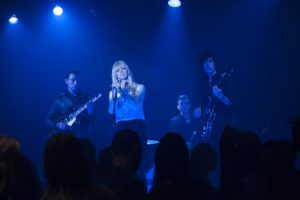 The episode ends in The Bang Bang Bar where we find a band (The Chromatics) with a lead singer that sounds very much like Julee Cruise singing a hauntingly happy song. James Hurley (James Marshall) walk in with a younger guy. A group of women sitting in a booth spot him. It’s Shelly (Madchen Amick)! One of the women says that he’s creepy but Shelly explains that he’s just quieter now after having a bad motorcycle accident. Their eyes meet and they smile at each other. 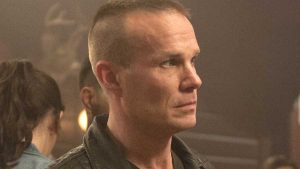 Much of the first two hours was new and disturbing and may not be the way you remember the show. But this final scene really felt nostalgic. It felt like being with old friends again. 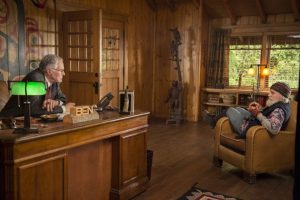 Cooper runs into Leland Palmer (Ray Wise) in The Black Lodge who tells him to find Laura.

Balthazar Getty shows up at the end in The Bang Bang Bar making eyes at Shelly. Getty starred in Lynch’s Lost Highway (1997).

I didn’t even recognize Ashley Judd! She shows up as Ben’s new secretary.

When the detectives search Bill Hasting’s car they find a piece of human flesh in the truck. Shades of Blue Velvet’s human ear found by Kyle MacLachlan’s character.

“Goodnight, Margaret.” This episode was dedicated to two cast members: Frank Silva (who played Bob, and died in 1995), and Catherine E Coulson, who played Margaret “The Log Lady” Lanterman.

The phone call between Hawk and Log Lady as he walks through the woods is bittersweet. When they say ‘Goodnight’ to each other we know it was really goodbye as we know that Catherine E. Coulson was very sick when she shot these two brief scenes and died soon after.

Here is the song from The Chromatics!