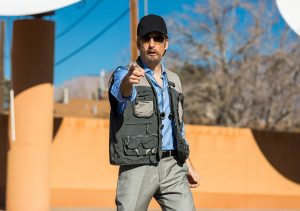 Each episode we see Jimmy slowly becoming Saul and it’s sad. In Breaking Bad we witnessed high school teacher and family man Walter White become ‘Scarface’ but Walter White was already kind of a schmuck, right? Jimmy is a loveable loser whose biggest flaw is that he cares too much about other people. He cares so much that he’s willing to bend the rules. It’s never been about him or getting rich. It’s been about doing right by his sick brother, getting Kim the client she deserves, helping his elderly clients get what they deserve and be treated with respect. Poor Jimmy has paid a price for his good deeds and I’m afraid he’s becoming cold and cynical which is where Saul Goodman resides. 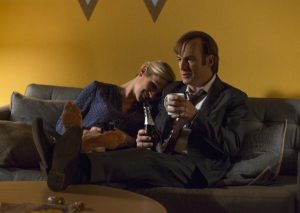 “He’s still your brother,” Rebecca
“Not anymore, he’s not.” Jimmy

Jimmy gets a one year suspension which is worth celebrating! Jimmy and Kim are having champagne when they get an unexpected visitor. Rebecca, Chuck’s ex, is worried about him. She went to his house and he won’t come to the door so she wants Jimmy to come with her to try to get in the house. Jimmy refuses to go with her. He’s had it with his brother. Kim looks on helpless. Rebecca looks betrayed.

“Chuck was right about you,” Rebecca says. “He’s mentally ill. What’s your excuse?”

Jimmy is starting to think of himself now. No more Mr. Nice Guy!
CHUCK 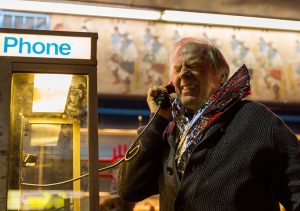 Chuck is very depressed about being outed in front of Rebecca and Howard. Howard comes over and convinces Chuck to let him in. He brings Chuck a bottle of 25 year old McCallan’s! Nice! Howard tries to convince Chuck to let it go and move forward. “Jimmy isn’t worth it”, he tells Chuck. But we know Chuck by now. He can’t let Jimmy win. It seems like Chuck is going to try to heal himself from his allergy to electricity. He takes a battery from the tape recorder and holds it in his hand like holding his hand over a fire. He then puts on a space blanket hoodie and walks down busy streets lines with neon signs and buzzing with dreaded electricity. He makes a call at a pay phone. I didn’t know there were still any pay phones! He calls a doctor that had treated him before and seeks help.
NACHO 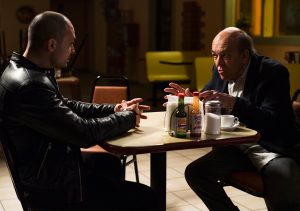 Mike is pretty much sidelined in this episode in order to make some room for nacho, Hector Salamanca’s main henchman and money collector. Its obvious Nacho does not like Hector. How could anyone? When Hector tells Nacho that he wants to start using Nacho’s father’s legit business as a cover to bring his drugs in from Mexico, Nacho seems to draw the line. When Hector has a coughing fir and struggles to take his medication, one of his pills falls on the ground. Nacho picks it up. Could it be that nacho will be the one that puts hector in that wheelchair? Ding! Ding! Ding!
GUS AND THE NEW PARTNER 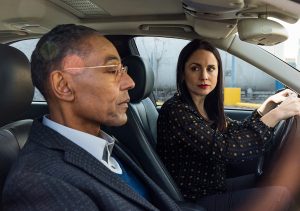 Gus scouts out an industrial laundry, the place that will be Walter White’s work place in the coming years. When he walks out he gets in a car to be greeted by Lydia!
“Well?” she asks
“It could work” Gus says.
JIMMY 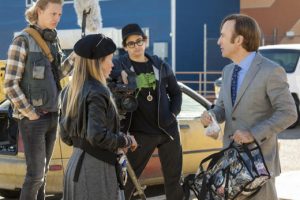 Jimmy bought all this air time to run commercials for his elder care business but now that he’s suspended from practicing law for a year he has to take them down. He also rejects Kim’s idea of trading in their office for a smaller and cheaper one. So he come sup with a great idea, as Jimmy is want to do! He decides to sell his already paid for TV spots to businesses. They will pay him to make a commercial and he throws in the air time for free! Jimmy bending the rules again. So he gets his ‘film crew’ together and they make a commercial. He can’t be Jimmy McGill offering to do this so he using a pseudonym that’s he’s used before. 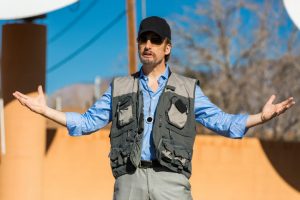 When he shows the commercial to Kim he seems a little embarrassed. When Kim sees Jimmy wearing a fake beard and moustache and calling himself ‘Saul Goodman’ she looks a little shocked.

“Saul Goodman? That guy has a lot of energy” She says
“It’s just a name” Jimmy tells her. 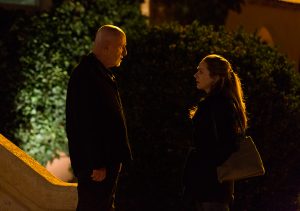 The only glimpse we get of Mike this week is when he accompanies his daughter in law to a grief counseling meeting at her church. She volunteers his help to fix up the children’s playground. This will probably be the playground we see him take his granddaughter to when the Feds come looking for him. Poor Mike! 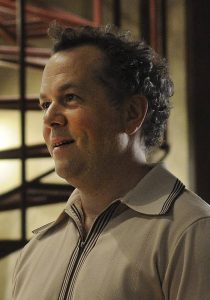 So we’re going to see Lydia and how she and Gus became a powerhouse partnership! I wonder if we’ll get to see Gale Boetticher, too? David Constabile who played Gale is currently starring on Showtime’s Billions but I’m sure he’d make time to visit Better call Saul and maybe bust out another song!