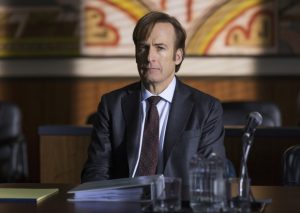 Wow. Jimmy and Chuck face off at Jimmy’s disbarment trial. The entire episode sets up their final confrontation. Special kudos to Michael McKean for his incredible performance. He deserves an Emmy nomination. We also get to see a glimpse of Jimmy’s future tactics in the legal arena with the sighting of an old friend. 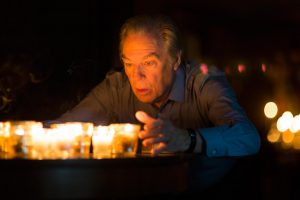 “The bigger the lie the hardest it is to dig out.”  Jimmy

We see Jimmy and Chuck in better times. Jimmy is helping him set up his house for a visit from Chuck’s ex-wife Rebecca. The lawn gets mowed, a new stove and oven gets brought in but only for show. Chuck has already developed his electricity allergy. Jimmy advises Chuck to be honest with Rebecca about his malady but Chuck can’t.  Instead, when Jimmy brings Rebecca over, Chuck comes up with a phony excuse about his electricity being turned off over a clerical error and borrowing some camping gear from his neighbor so he could cook dinner.  Jimmy plays along.

Things go well, all the candles sets a romantic mood but when Rebecca’s cell phone goes off and she answers it Chuck goes into a tizzy. He grabs her phone and tosses it.  He still can’t bring himself to tell her his problem and claims he found it rude for her to answer her phone during dinner.  Rebecca is taken aback and decides to leave and so sets the scene for what’s to come. 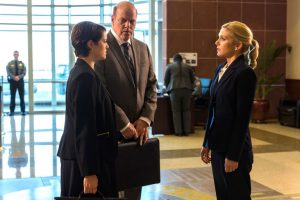 Kim is scoring points with Mesa Verde who are more than happy with her.  But Kim tells them about Chuck’s claim that Jimmy doctored documents in order to lure their business from HH & M. She’s upfront with them and is rewarded with their complete support. 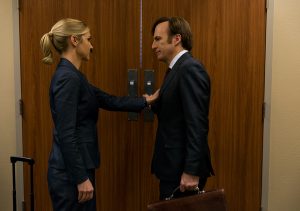 It also seems that Kim and Jimmy are still mixing business with pleasure.  We seem them getting ready for their big court appearance, brushing their teeth in front of the bathroom mirror and looking at each other with great affection. Something tells me things will not turn out well for Kim. The foreshadowing is too painful. But that is not for this episode.

Howard and Chuck meet at the courthouse to make preparations for his testimony. The court will shut off all the lights except the bright red Exit signs (fire laws and all). Howard tells Chuck his testimony is not necessary, that they have enough proof and he doesn’t need to show up for the hearing. Chuck sees that Howard is more concerned about PR and the reputation of the firm. Howard tells him that it was because of Chuck’s illness that Jimmy was able to doctor those documents. He should have never had those sensitive documents at his house. But Chuck is determined to testify.

He wouldn’t miss seeing his brother’s demise for the world. 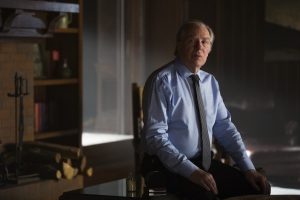 The scene of Chuck rehearsing his testimony by himself at home was both funny and pure evil. He practices being sincere and showing affection for his brother. It was awful. He has no love for his brother. He is filled with vindictiveness and jealousy. No matter how successful and respected he’s become no one likes him. Everyone loves Jimmy. 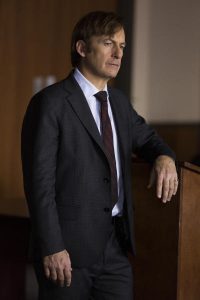 “You know she’s going to hate you after this.” Kim

Jimmy takes his goldfish to the vet but not just any old vet.  This is Mike’s vet. Jimmy needs a guy with a ‘light touch’ for a job.

“You got to fit him in a tight space? The vet asks.

“I don’t think so.” Jimmy answers.

“I got just the right guy then.” 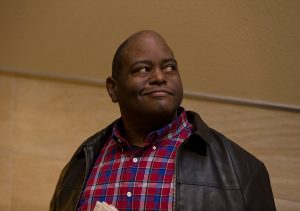 When Chuck shows up at the court house he gets bumped into by a familiar face. It’s Huell!!! The beginning of a very special relationship is born.

The prosecution lays out a very solid case. No question that Jimmy broke into Chuck’s office and destroyed that cassette tape. Kim argues that behind this act was bad blood between two brothers.

Howard is a solid witness but I was impressed that, under cross examination by Kim, Howard was pretty forthright and honest. Deep down I think he likes Jimmy.

They play the tape. I assume this is the first time Kim is hearing it.  I wonder how she felt hearing Jimmy defend her so vehemently. Meanwhile, Jimmy asks Francesca about something – “Flight’s delayed” she tells him. Jimmy is having someone flown in for the hearing, but who? He and Kim have to stall a few times to slow down the hearing to give this mystery person more time to show up.

Chuck takes the stand and explains why he recorded his brother, his suspicion that Jimmy had doctored legal documents and even explains his illness – EHS – Electromagnetic hyper sensitivity. He seems very calm describing it and his testimony was solid.

“Do you hate your brother? the prosecutor asks Chuck.

“Absolutely not. I love my brother. There’s nothing malicious in Jimmy. He has a way of doing the worse things for reasons that sound almost noble.  But what I know for sure is that the law is too important to be toyed with.

The way my brother treats the law, it breaks my heart”  Chuck says. 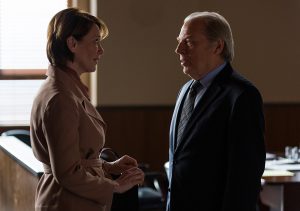 Then, Jimmy’s mystery guest arrives. It’s Rebecca! Chuck is stunned. He asks for a break and goes over to speak with his ex. he learns that Jimmy has told her about his illness.  He sent her the photos that Mike had taken inside Chuck’s house.

Rebecca senses Chuck is uncomfortable having her there and offers to leave but Chuck convinces her to stay.

“You’ve been sold a bill of goods, Rebecca.  I want you to see whats what.” Chuck tells her. 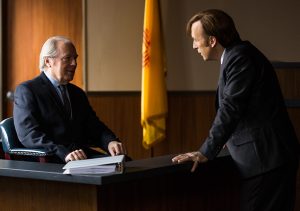 When the hearing continues, it’s Jimmy that does the cross. It’s awkward and uncomfortable. Jimmy tries to set the scene, having Chuck describe how he had covered all the walls and ceiling with aluminum and ‘space blankets’.

“It comes down to this. In order to understand what I was thinking, you need to see Chuck through my eyes. You need to know if I believed that tape was evidence. And I say it was evidence of only one thing: my brother hates me. Chuck claims that lied to me to get me tell the truth and I’m telling you I lied to my brother to make him feel better. Which of us you believe depends on how we all understand the mind of Charles McGill.” 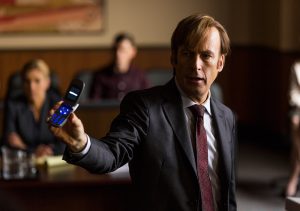 Jimmy tries to establish that his illness started when Chuck got divorced. He gets Chuck to describe how he is physically affected by electricity. The closer the current is to him the more painful it is. Jimmy tries to trick him, having kept his cell phone on him but Chuck is on to him.  Chuck takes the cell phone and sees that there was no battery in it.

“I don’t know Chuck.  Can you reach into your breath pocket and tell me what’s there?”

Chuck pulls out a cell phone battery.  He quickly tosses it.  Huell had planted it there when he bumped into him earlier. Chuck had no idea it was there and he felt no pain. This is when Chuck loses it.  He becomes Captain Queeg on the stand. 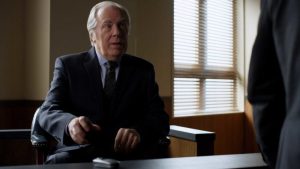 “You think this is bad? This, this chicanery? He’s done worse. That billboard: are you telling me that a man just happens to fall like that? No, he orchestrated it. Jimmy. He defecated through a sunroof, and I saved him. I shouldn’t have. I took him into my own firm. What was I thinking? He’ll never change. He’ll never change. Ever since he was nine, always the same. Couldn’t keep his hands out of the cash drawer. But not our Jimmy – couldn’t be precious Jimmy! Stealing them blind, and HE gets to be a lawyer? What a sick joke! I should have stopped him when I had the chance. And you, you have to stop him!” 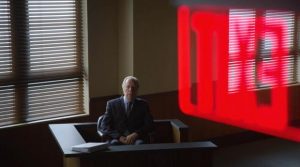 He realizes that everyone is looking at him in shock and pity. Jimmy has proven to everyone that Chuck’s illness is all in his head. The court couldn’t possibly disbar him now.

The episode ends with Chuck alone on the stand, the red exit sign emanating electrify above him.

Chuck has all but ruined his reputation.  Howard may try to convince him to retire for real this time.

Jimmy wins but at what cost?

Kim is also a winner but as Chuck warned her last season, Jimmy will end up ruining her, too.

The show is a showcase for the writers as much as for the actors.  The dominoes are being carefully and artfully placed for the big fall.