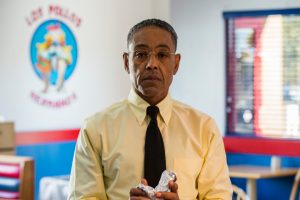 The first half of this episode felt like the Gus Fring Show. He’s back in a big way! 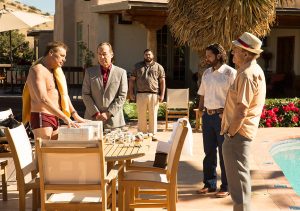 The cold open welcomed back Don Eladio (Steven Bauer). He dives into that famous swimming pool and the shot is a call back to the last time we saw him in the Season 4 episode ‘Salud’ falling dead into said pool after being poisoned by Gus. But here he is alive and well! Hector shows up with tribute from his drug running operations which he is laundering through a string of ice cream shops. His lackey hands Don Eladio a bag of money rolled up in rubber bands, It was a good haul but not as good as the three bags of nicely piled and wrapped stacks of green backs that Don Bolsa brought courtesy of Gus Frings’ smooth run chicken operation plus a Los Pollos Hermanos t-shirt. 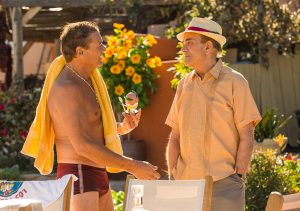 Don Eladio teases Hector saying ‘Gus’s is bigger than yours’. Hector did not take this well. 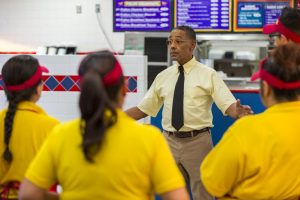 He shows up at Los Pollos Hermanos with a bunch of goons, including Nacho, looking for Gus. They scare off all the customers and the young supervisor on duty is forced to call Gus. Gus was meeting with a group of fireman doing some community networking. This was the same firehouse that Walt leaves the baby in the great Breaking Bad Ozymandias episode. 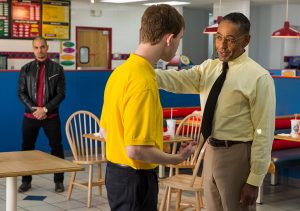 Gus shows up at the store and tells all his employees to go home and come back the next day. He plays nice with Hector who tells him that he needs Gus to start transporting his drugs across the border as well as his own. Gus pushes back and asks if Don Eladio agreed to this.

“I am the cartel and from now on you are my mule. You are going to bring my product north.” Hector tells Gus.

The next day Gus reassures his employees that nothing like this would happen again. These guys were criminals who followed him from Mexico and trying to shake him down but he refused. He even gives them 24 hours of Overtime pay! What a great guy!

But how will Gus actually refuse Hector? Will he need Mike to help him? Oh, I think so. 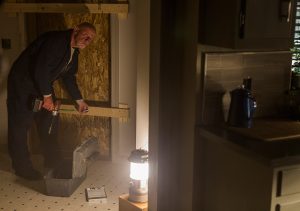 Mike’s sabotage of Hector’s ‘ice cream truck’ last week has sent the Feds searching Hector’s ice cream stores and investigating him. Mike seems satisfied with that and spends the evening eating his daughter in law Stacey’s lasagna and being with his granddaughter, Kaylee. Stacey (Kerry Condon) sees something is bothering him but he just says he’s tired.

One night while Mike is at his post in the parking lot a car pulls in and it’s Gus’ main henchman, Victor. Victor hands him a bag of money. Mike throws it back at him and says to tell Gus that we’re square.

The next night Gus himself drives into the lot to speak with Mike. Mike explains what he did he did for himself not for Gus and he didn’t want to be paid for it.

“Would you like to know why I didn’t let you kill Hector?” Gus asks.
“Like you said, it wasn’t in your interest.”
“A bullet to the head would have been far too human.” Gus tells him.

“Perhaps one day you will consider working for me.” Gus says.
“Could be.” Mike says.

Oh, Mike, the deal with the devil is just around the corner. 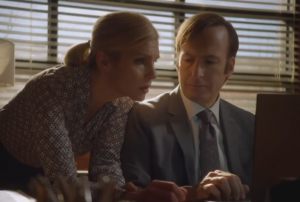 Kim makes a ton of calls trying to the find the repairman that Chuck has hired to fix the door that Jimmy broke down. Once she finds them she cancels the appointment Chuck made.

Jimmy then hires Mike to show up at Chuck’s as a repairman in order to take photos. Mike, obviously coached by Jimmy, uses a battery operated drill to keep which drives Chuck crazy with pain and he stays clear of Mike which was the idea.

Mike meets Jimmy in the diner, the one we have seen Mike in many times. Jimmy loves the photos and calls Mike ‘the Ansel Adams of indoor photography’.
Mike also hands him a piece of paper with some info taken from Chuck’s address book. Jimmy plans to use these against Chuck somehow, maybe to support a claim that Chuck is mentally incompetent?

Jimmy also wanted to make sure that Mike actually did a good job with the door. Mike assures him he did.

“Nice to fix something for once.” Mike says.

Mike doesn’t know how much fixing he has in store for him. 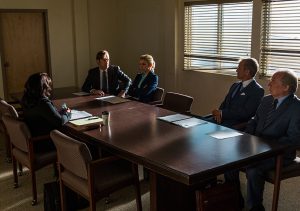 Jimmy and Kim faced off against Chuck and Howard with ADA Hay. Jimmy had to write a letter confessing his crimes. Chuck nitpicks and is petty at this meeting but Jimmy keeps his cool. When Hay presses Jimmy to apologize to Chuck then and there Jimmy comes through with an apology that is both sincere and cutting.

“Chuck, I’m very sorry. I lost my temper and I did some things, so many things that I regret. I shouldn’t have broken down your door. Doesn’t matter how I was provoked, I shouldn’t have done that. There’s no excuse for that, or for the things that I said. I regret it all, all of it, more than you can imagine. Because, you’re my brother, and no one should treat his own brother like that. Ever.” 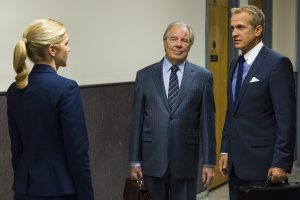 The next step is Jimmy facing the Bar and possibly losing his law license. After the hearing Kim spars with Howard and Chuck and gets Chuck to admit that Jimmy destroyed the duplicate tape and that he still has the original. When Kim meets Jimmy a minute later he anxiously inquires, “Well?” and Kim simply replied “Bingo!”

What do they have up their sleeves? I have a feeling that disbarment hearing is going to be fireworks! Perhaps this might be the moment that sends Chuck into full meltdown? 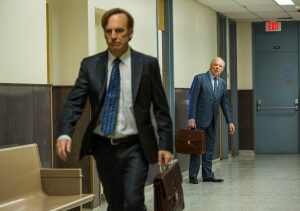