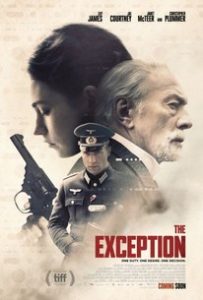 It’s Tribeca Film Festival time again!  I always try to see at least two films every year and such is the case again this year.  Most of the films never seem to be released in the theater or if they are, it’s without much support. This is not always because the films weren’t any good. Some of them are very good indeed but, for some reason or another, no one can see the box office potential or a way to promote them in today’s super hero, animated and action dominated market. 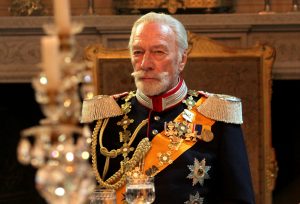 First up is The Exception directed by first time director David Leveaux and starring the legendary actor Christopher Plummer. Plummer plays Kaiser Wilhelm II, the last German emperor who went into exile in the Netherlands after a disastrous reign and when he lost the support of his army during WW I. The Kaiser is the focal point of the two main characters Captain Brandt (Jai Courtney) and Mieka (Lily James) a young Jewish Dutch woman who is a maid in the Kaiser’s home.

The action takes place in 1940 and Captain Brandt is sent to Holland to command the security unit guarding the Kaiser. He seems to have been involved in something disgraceful on the battlefield and this is some sort of banishment from the front lines. He meets Mieke who works for the Kaiser and sparks fly immediately or should I say ‘smoldering eye contact’? Soon enough they are taking off their clothes and getting involved even when they know it is so completely wrong. But it feels so right! The local Gestapo tells Brandt that they suspect there is a British spy lurking about and they are tracking a radio signal that is coming from the nearby town. Brandt starts suspecting Mieke. 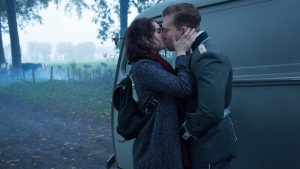 Meanwhile, the Kaiser and his wife Hermine (Janet McTeer) hold out hopes that Hitler will welcome back the Kaiser now that war has broken out again, and restore him as the head of state. She invites Heinrich Himler (Eddie Marsan) to visit them so they can make their case. Himler is a despicable person, who took the lead in creating concentration camps and orchestrating the Holocaust. 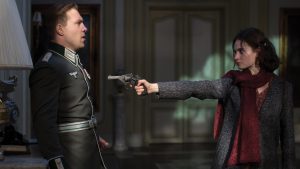 All these storylines intersect in a highly melodramatic fashion. It reminded me, in some respects, of those 1940s WW II films complete with outlandish characters and highly romanticized. There was also a very ‘modern’ feel to it especially in terms of the amount of humor that was in the film, mostly from Plummer as the Kaiser. It left me conflicted a bit about the overall effect of the film. The film is, at heart, a romance. But the attraction of these two characters isn’t really strong enough to warrant the actions they take for one another. This is not necessarily the fault of the actors, the script or the director but maybe a combo of all three. I can imagine what Hitchcock may have done with a story like this with Cary Grant and Ingrid Bergman in the leads and Claude Rains playing the Kaiser. But he was Alfred Hitchcock. 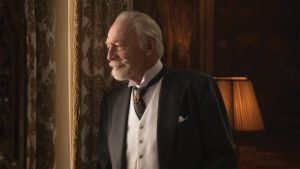 All that said, this is a very entertaining film and worth seeing if only to wonder at the talent and charm of Christopher Plummer who is wonderful in it. Janet McTeer is effective as his wife. Lily James (Downton Abbey) and Jai Courtney (Suicide Squad) are lovely to look at. Eddie Marsan (Ray Donavon) is appropriately creepy as Himler.

Christopher Plummer, Janet McTeer and the director appeared onstage after the film for Q & A and Plummer was just as charming live as in the film. One of the people in the audience that got to ask a question was a Jewish man who said that his great grandfather had worked for the Kaiser during his time in exile in Holland. He also said that his family had escaped to England during the war and had avoided Nazi persecution. It was quite a moment. Director David Leveaux said that one of the reasons he was drawn to making the film, aside from the chance to work with Plummer, was the idea of two Germanys represented by the Kaiser and Himler and the Nazis. The Kaiser did not agree with Hitler and his philosophy. Wilhem II was of a different time and Hitler was a new dangerous reality. The film did highlight that idea very well.