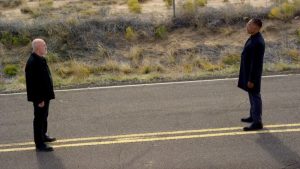 We finally get the moment that Mike meets Gus. You can already see the mutual respect. The scenes with Mike are just amazing. They are so well thought out and shot. It’s a master class in storytelling. Meanwhile Jimmy moves further along on his path to become cold and cynical Saul Goodman 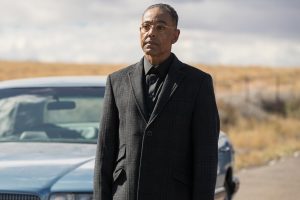 “It is not in my interest to have Hector die….at this present time.” Gus Fring

Mike finally meets Gus. Gus advises Mike that he doesn’t want Hector dead…..yet. he understands that the real reason Mike wants to kill hector is because Hector killed a ‘civilian’. He respects Mike’s sense of justice. He won’t allow Mike to kill Hector but if Mike wanted to rob another one of Hector’s drug shipments he would be okay with it.

“You want to disrupt his supply line. Hector’s your competition.” Mike says. Mike agrees not to kill Hector but he tells Gus that he’s not done with him.

He goes after another shipment but instead of robbing it he comes up with a very creative way to disrupt Hector’s business.

I won’t go into detail what he does but suffice it to say it’s pretty damn clever. 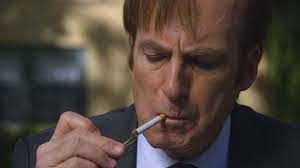 Meanwhile, Jimmy sits outside Chuck’s house, lights up a cig and waits for the cops to show up and arrest him. Chuck actually goes outside to talk to him. He’s not even covered in his electricity resilient blanket. Chuck tries telling Jimmy he’s doing this for his own good and that he needs to change his life before it’s too late. A lot of condescending bullshit. Jimmy very calmly eviscerates him.

“Here’s what’s gonna happen,” he says. “One day you’re gonna get sick, again. One of your employees is gonna find you curled up under that space blanket and take you to the hospital, hook you up to those machines that beep and whir and hurt. And this time it’ll be too much, and you will… die there. Alone.” 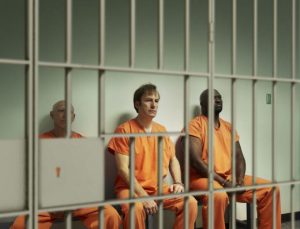 Jimmy gets processed into the jail, pictures, fingerprints, the whole deal. Yet, he doesn’t call Kim. He spends the night in jail.

The next morning Kim gets a nice little montage that felt very 70s. Her alarm goes off at 530am and she heads to the gym. She works out showers up and heads to the office where she finds Ernie who Chuck has fired. He tells her about Jimmy. She gets to court as Jimmy is getting arraigned but Jimmy wants to represent himself and enters a plea of not guilty to some very serious charges including felony breaking and entering. 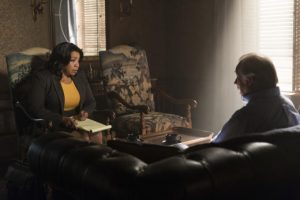 Jimmy tries to make a deal with one of his old court appointed lawyer buddies but he’s told that the whole staff had to recuse themselves because of their previous working relationship with Jimmy. An outside DA will be prosecuting his case. This DA meets with Chuck at the house and goes over the charges. Chuck asserts that he wants to press charges and that his illness would not prevent him from showing up in court to testify. But he makes a proposal to the DA, an alternative to taking the case to trial.

Jimmy and Kim share a smoke just like they used to in the parking garage of H,H &M in season one. He tells her that he was contacted by the DA who offered him a PPD (pre-prosecution diversion), which would mean he’d avoid jail and keep his record clean. But he’d have to admit to having committed all the offenses he’s charged with… including the felony, which would mean he’d get disbarred.
Chuck doesn’t want Jimmy to go to jail. He just doesn’t want him to be a lawyer anymore. Kim convinces Jimmy to let her help him. 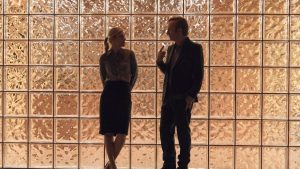 “Let’s just call it the fallacy of sunk costs,” Kim says, taking his hand. It’s very sweet but you just feel the doom written on the walls of Wexler & McGill. 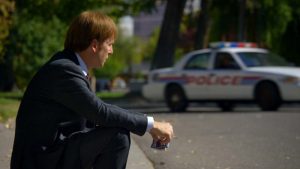 There’s a scene where Mike visits a Mexican doctor. A door opens, a bell rings, and the camera settles on a wheelchair. Now this has nothing to do with anything other than just a little ‘Easter egg’ for Breaking Bad fans. Brilliant.

Chuck fired Ernie. My guess is that Kim and Jimmy are going to get Ernie to testify on Jimmy’s behalf. Ernie could probably testify to Chuck’s mental problems if their defense goes at Chuck’s mental state somehow.

Jimmy must lose his law license. But can just changing his name allow him to practice law again?

I wonder if Jimmy enlists Mike to do some ‘special’ work on his case? I don’t feel sorry for Chuck but I have a feeling things will not end well for him this season.

What are the ‘sunk costs’ Kim refers to? Jimmy’s relationship with his brother? Or her investment in Jimmy? What will it ultimately cost Kim? The sens of foreboding is awful!