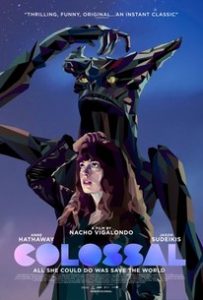 This is not an easy movie to describe. It is part comedy, part horror film, part sci-fi and part revenge film. Suffice it to say that writer/director Nacho Vigalondo has created something completely original. I found it to be really fun and unusual.

Anne Hathaway plays Gloria, an unemployed and alcoholic mess!, Her boyfriend, Tim (Dan Stevens) reaches his breaking point, breaks up with her and kicks her out of their apartment. Gloria goes back to her small hometown and runs into a childhood friend; Oscar (Jason Sudekis) who now run’s his late father’s bar. Oscar gives Gloria a job and soon enough they’re staying after hours with Oscar’s other friends, Garth (Tim Blake Nelson) and Joel (Austin Stowell) and drinking until morning. 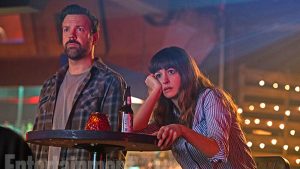 Now it starts getting odd. Each morning, they stumble out of the bar and Gloria sleeps on a bench near a children’s playground. Simultaneously, a creature begins to show up in Seoul, Korea. Some kind of reptilian creature, a ‘kaiju’, think Godzilla. 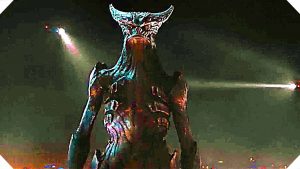 The creature starts terrorizing the city. Gloria realizes that at the same time she enters the playground, at 8:05am, the kaiju appears! She tells Oscar and the guys and at first they find it funny until she realizes that by walking around the playground she’s actually killing people in Seoul! Furthermore, Oscar’s presence at the playground manifests a giant robot to appear in Seoul! When Gloria sleeps with Joel, Oscar gets jealous and the movie takes a dark turn. Oscar and Gloria come to odds and, as they do ‘battle’ in the playground, so do their counterparts in Seoul causing mayhem and destruction. 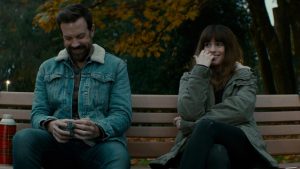 The film is really entertaining and creative. Anne Hathaway is great and Jason Sudekis does creepy well. Don’t be scared away because it sounds weird. I almost didn’t go to see this for that reason but I’m very glad I checked it out. Even if it doesn’t turn out to be your cup of tea you will appreciate its uniqueness and it’ll stay with you. Keep on eye on Nacho Vigalondo! I hope he gets a chance to make more interesting and ambitious films like this one! 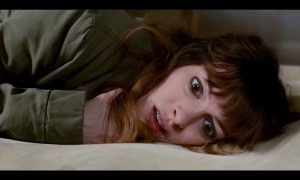 Other side notes of interest: The music was composed by Bear McCreary who does the really great music for The Walking Dead. You may recognize Austin Stowell because he played Francis Gary Powers in Bridge of Spies (2015).