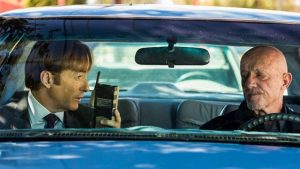 Each episode brings Jimmy closer to becoming Saul and Mike closer to meeting Gus Fring and beginning that fateful partnership that will lead to his demise and that “trip to Belize”.

We also get to see Jimmy and Mike in a scene together which has been rare up to this point. I’m hoping this will change going forward. They’re like Laurel and Hardy. Jonathan Banks hardly says a word but he doesn’t have to. His expressions say so much. Bob Odenkirk must have a great memory because he’s given a load of lines every week and he delivers them flawlessly. They make a good comic team!

“Who has your back? I do!” Jimmy tells Mike.
Mike winces and churns out “I’ll keep that in mind.”

The first scene shows Chuck wandering around his house drinking tea and feeling very relaxed. Then you see a guy playing solitaire in the kitchen. Chuck is not startled, he knows he’s there. Who is he? Security? Chuck keeps looking out the window as if he’s expecting someone but not in a scared way. Something’s afoot. 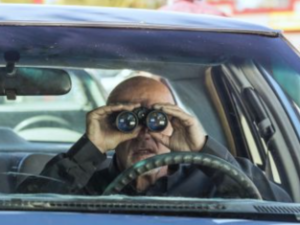 Mike is still following the signal on his fancy new transmitter. The photography in these scenes is amazing, just gorgeous. Mike tracks his prey to a fast food joint. Can you guess the name? Of course you can! The bag man that was picking up bags of ‘something’ all night walks into Los Pollos Hermanos with the bag and seemingly makes the delivery. Mike buys a new car and calls Jimmy. He asks Jimmy to go into the place and order breakfast in order to determine what the bag man does with the delivery.

Jimmy is game and watches the bag man closely without even realizing the man sweeping up and cleaning tables all around him is ‘The Man’, Gus Fring himself. The bag man sits down, eats his breakfast with the bag at his feet. He finishes up, grabs the bag, walks out and drives away. No hand over took place. Jimmy even checks the garbage can to see if the bag man dropped something in there. 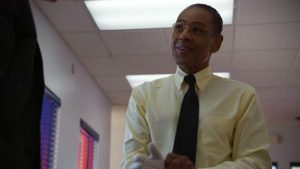 “Can I help you?” a voice rings out. We know that voice.

Jimmy drops his watch in the trash to make an excuse and Gus puts on his rubber gloves and digs in the trash can to retrieve his watch. Jimmy thanks him and goes outside to report to Mike. That Gus Fring is a helpful guy.

Mike sets up surveillance outside Los Pollos Hermanos. In one scene we see Gus sweeping up outside. He looks up and gives that dead eyed look. He knows he’s being watched. 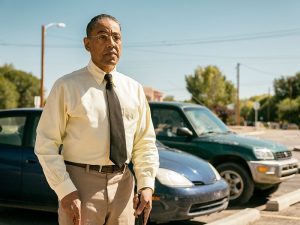 Soon enough, a bug SUV screeches into the parking lot of the fast food place. It quickly goes back in motion and Mike notices that the transmitter is now on the SUV and so he follows. But the signal goes dead and he finds the gas cap with the transmitter in the middle of the road with a cell phone.

The cell phone rings and Mike answers, “Yeah?” He’s been made. 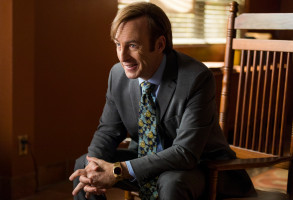 Jimmy and Kim interview for a much needed receptionist. Jimmy wants to hire the first person who comes in to interview, Francesca. She’s a sweet lady who quit her job at the DMV because of too much red tape. She just wants a job where she can help people. She’s a girl after Jimmy’s heart. He gets Kim to agree and she starts right away because Jimmy has a commercial airing that day and he expects a lot of business. Sure enough, the calls start coming in and Jimmy stands there coaching Francesca to be more folksy, mention ‘Cracker Barrel’ and always refer to him as ‘Jimmy’. She picks it right up!

Ernesto shows up to Jimmy and Kim’s office but will not come in because he doesn’t want Jimmy to see him. He calls Kim and has her come out to meet him in his car. He hesitantly tells her that he heard Jimmy’s confession on Chuck’s tape recorder. This must have been Chuck’s plan all along.

Kim comes back into the office and grabs Jimmy.
“Give me a dollar”
“I only have a twenty”
“That’ll work. Now I’m your lawyer, anything you say to me will be confidential.”

Now we know where Jimmy got this. He did the same thing with Walter White and Jesse in the Breaking Bad, Season 2 episode entitled, of course, Better Call Saul’.

Kim tells Jimmy who is devastated that Chuck would do that to him. They can’t figure out why or how Chuck would use the tape. Jimmy is disappointed at first but then something snaps and he races out of the office in a rage. 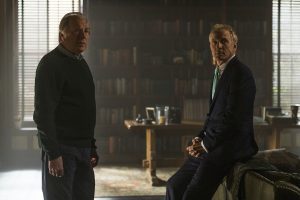 We find out what Chuck had planned. Of course he meant for Ernesto to hear the tape and he counted on him to tell Jimmy. He then hired security, paid for by H, H & M to be at his house full time waiting for Jimmy to break in and take the tape. I assume he would have Jimmy arrested. Then what? Have him disbarred? Or just humiliated? What a heartless person Chuck has revealed himself to be.

Howard Hamlin shows up to tell Chuck that his plan didn’t work and that the security was costing a fortune. But just as Chuck assured Howard that he knew his brother and that Jimmy would come in the middle of the night and sneak in for the tape, Jimmy arrives pounding on the door.

Jimmy breaks down the door! He’s yelling at Chuck who looks sincerely stunned. Jimmy pries open the desk drawer and gets the tape. He shoves it in Chuck’s frightened face. 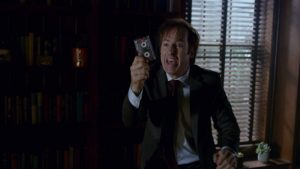 “For this you destroyed our family? Are you happy now? For what? For nothing!” Jimmy screams as he destroys the tape. Just then Howard and the security man come out from hiding.

“Howard, you were a witness to what happened here? Chuck asks. Howard confirms as does the security man.

This is a crushing moment for Jimmy and for the audience. Jimmy had only love for his brother, always. He always took care of him, looked after him, physically and emotionally. He only confessed what he had done to help Chuck. This could and probably does, break him. It’s really sad, actually.

“You look a little crooked” Francesca tells Jimmy. Boy is she going to find out just how much! 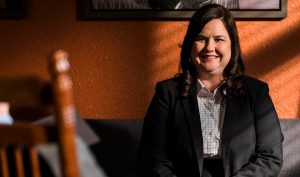 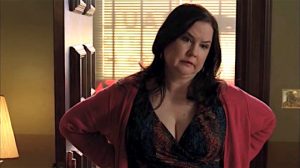 I didn’t pick it up at first but Francesca will also be Saul Goodman’s put upon secretary in Breaking Bad. She sure becomes a different woman by that time. Kinda sad.

Jimmy rolls the tape off his wall just as Chuck taught him in the last episode, “Mabel.” He looks up to his brother Chuck so much. I now blame Chuck for Jimmy ‘breaking bad’.