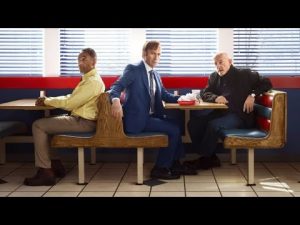 Better Call Saul has exceeded my expectations in its first two seasons. I think it has even surprised its own creators, Vince Gilligan and Peter Gould who first envisioned a 30 minute comedy but realized there was much more to explore with the character of Saul Goodman. Saul was the comic relief in Breaking Bad which has a highly tense drama. He didn’t have much back story or any scenes that didn’t directly relate to the two main characters and drug dealers. In the penultimate episode of Breaking Bad, Saul and Walt are on the run and on their way to new lives under a new name. Saul tells Walt “If I’m lucky, I’ll be managing a Cinnabon in Omaha, Nebraska!”

The first episode of Better Call Saul revealed that Saul ended up exactly where he imagined, His name is now ‘Gene’ and he manages a Cinnabon in a huge mall. But this isn’t the first time he had assumed a new identity. We soon discover that before he was Saul Goodman he was Jimmy McGill. Jimmy is an amiable, well meaning person who has spent most of his life being a low end con man but has become a lawyer to try and better himself but mostly to gain the respect of his older brother, Chuck who is a very successful lawyer.

Gilligan and Gould had intended to show how Jimmy became Saul by the end of the first season but discovered that they very much like Jimmy and the more they did the more they didn’t like Saul and didn’t look forward to seeing that transformation. So Better Call Saul has turned out to be quite tragic and sad. His relationship with his brother seems to be the linchpin to his transforming to the more cynical and outright crooked lawyer Saul Goodman. No matter how much he tries to do the right thing Jimmy can’t keep himself from bending the rules in order to do what he deems to be right. 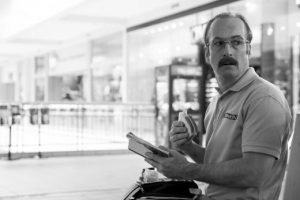 Each season of BCS has opened with a black and white cold open showing Jimmy/Saul living his new life as Gene, the manager of the Cinnabon. Gene is sitting on a bench in the mall having his lunch when a teenage boy comes running around the corner, something falls out of his jacket. He’s obviously being chased for shoplifting. The kid looks right at Gene and then hides in a photo booth. Two cops come around and ask Gene if he’s seen anything suspicious. Gene seems to pretend as if he doesn’t hear them but then slowly brings his hand up and reluctantly points to the photo booth. The cops grab the kid. The cops that Gene who looks sick to his stomach. As the cops drag the kid away, Gene stands up and shouts “Say nothing, you understand!”

Gene is having a harder time, it seems, suppressing his natural instincts. Where will this lead? Well, it leads to him going back to work, icing cinnabons and passing out cold, a glob of icing falling on his face. 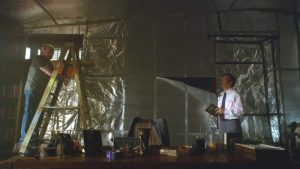 Jimmy, you do realize you just confessed to a felony? Chuck

In the Season Three opener, titled ‘Mabel’ (also Vince Gilligan’s mom’s name), we pick up right where we left off at the end of Season Two, Jimmy (Bob Odenkirk) has admitted to Chuck Michael McKeon) that he doctored the Mesa Verde documents so that they would dump Hamlin, Hamlin & McGill and hire his girlfriend, Kim instead. What Jimmy doesn’t know is that Chuck secretly recorded their conversation. While Jimmy helps Chuck take down all the aluminum from the walls, he spots a book on the shelf; “The Adventures of Mabel”, a book he remembers his mom reading him when he was a child.

“I read that to you”, Chuck corrects him. The resentment in Chuck’s voice speaks volumes. He has always resented that people liked Jimmy more than himself, especially their mother. He has spent his life keeping Jimmy down to make himself feel better.

“Jimmy, don’t think I’ll ever forget what happened here today. And you WILL pay.” Chuck tells Jimmy, very matter of factly, but it is most certainly a real threat. 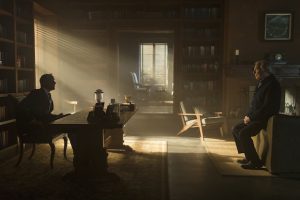 Chuck has his partner, Howard Hamlin (Patrick Fabian) come over and listens to the tape and he is shocked but reminds Chuck that it can’t be used in court.

“Chuck, if that tape is useless in a court of law, and no help in the court of public opinion, what’s the point? Because I can’t think of a single use for it.” Howard tells him.

“I can.” Chucks says with a slight smile. He may have well been twirling his moustache, if he had one. 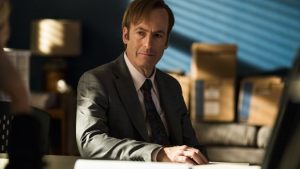 “For 10 minutes today Chuck didn’t hate me. I forgot what that felt like.” Jimmy

Jimmy gets a visit from the Air Force captain that let him on the base last season so he could shoot a commercial. Jimmy had hired an old guy named ‘Fudge’ to sit in a wheelchair and claim to be a veteran so they could get on the base and shoot knowing he wouldn’t get permission otherwise. Well Captain Bauer (Brendan Fehr) saw the commercial and comes to tell Jimmy to take it off the air. Jimmy slides into ‘Slippin’ Jimmy’ mode and tries to smooth it over with the captain but he was threatening to bring charges against him. Here is where Jimmy loses it; he changes his tone and threatens the captain, saying he would embarrass him for falling for Jimmy’s con job. Jimmy catches himself and calms down.

“The wheel is going to turn.” The captain tells him before leaving his office.

This could be the first ‘Saul Goodman’ sighting. This moment. 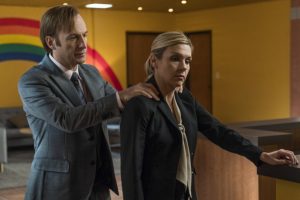 Jimmy and Kim (Rhea Seahorn) are sharing office space and because Jimmy had to run over to talk Chuck out of retiring, Kim had to take all of Jimmy’s senior clients in his absence. There’s real affection between these two. You want to see them grow as a couple and as partners but Kim knows that Jimmy slips over into unethical behavior. She tells him not to tell her anything about those instances but she won’t be able to ignore that side of him forever.

She meets with her friend, Paige, from Mesa Verde and she is impressed with the job she’s done in very short time. Paige lavishes her with praise and tells her ‘I knew you were the right person for the job’. But none of this sits well with Kim. She knows how she got this client and it eats away at her very ethical conscience. 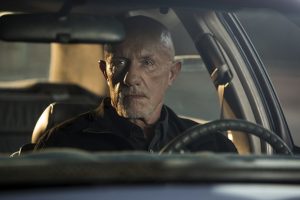 Mike Ehrmantraut’s (Jonathan Banks) storyline is running on a separate but parallel course as Jimmy’s. Mike was planning on assassinating Hector Salamanca but was stopped by someone unknown who left a note on his car simply stating ‘DON’T’.

Mike drives to the junkyard and starts tearing his car apart looking for a tracking device he thinks may have been planted by this anonymous person. It’s a great scene that reminded me of Gene Hackman tearing apart his apartment at the end of The Conversation (1974) in a paranoid search for a bugging device. But it seems the scene was more inspired by another Gene Hackman film, The French Connection (1972) where Hackman’s Popeye Doyle tears apart a car looking for drugs. Mike initially doesn’t find anything but then has an epiphany and finds the tracking device planted in the gas cap. 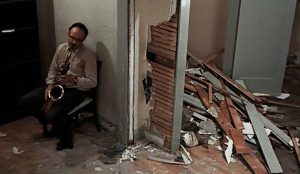 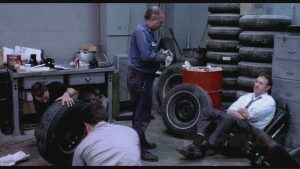 Mike gets his hands on a radio-frequency beacon tracker and sets a trap. He replaces the tracking device in the gas cap with a new one. When the person comes by in the dead of night to remove the tracker he actually picks up Mike’s newly planted tracker. Now all Mike has to do is follow it to find out who stopped him from killing Hector Salamanca.

One guess who that might be? Gus Fring, perhaps? 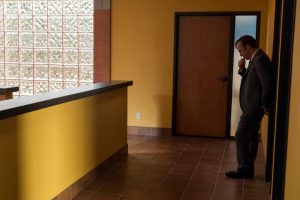 The photography in this episode was absolutely beautiful.  The shots were creative and moody, especially concerning Mike’s storyline.  It plays out like a film noir. Kudos to the director of photography, Marshall Adams

Ernesto, Chuck’s helper from HH&M brings Chuck some supplies including new batteries for his tape recorder.  While changing them he accidentally turns it on and hears part of Jimmy’s confession.  Chuck gets mad at him but could he have planned for that to happen?  And to what end? 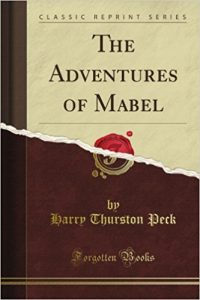 As you know if you loved Breaking Bad, BCS has the same incredible attention to detail. Nothing is random. The book Jimmy finds on Chucks’s shelf, “The Adventures of Mabel,” was written by Harry Thurston Peck — an author whose life parallels Jimmy’s in some ways. Peck originally published the book under the pen name Rafford Pyke. Then, he used the literary journal The Bookman, which he edited, to publish a glowing review of “The Adventures of Mabel,” not disclaiming his rather obvious conflict of interest.

Mr. Peck/Mr. Pyke had a life filled with controversy and later on was caught in an adulterous scandal which cost him his job as a professor at Columbia.

Four years later, he shot himself. Both Jimmy McGill and Harry Thurston peck used fake identities and stepped over the ethic boundaries and ended up paying a price.

The song playing during the cold open was Sugar Town by Nancy Sinatra.  Enjoy!