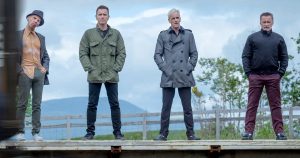 In 1996 I lived in San Francisco and fancied myself a poet. I hosted a monthly poetry reading called ‘Rubbish’ that took place in the Edinburgh Castle Pub. Alan, the manager, a Scot from Glasgow, was also a writer and started hosting readings with Irish, British and Scottish writers. I participated in one which also included Irvin Welsh. A play version of the novel was already playing in London and Alan asked Irvin if they could mount the production at the pub and how much it would cost for the rights. “10 quid”, Irvin said. “Aw, fuck off!” Alan replied with a smile. “No, I mean it. It should be done in a pub like this, for the punters.”

So Trainspotting, the play, went up in March of 1996 and was a big hit! It was a great show and I worked behind the scenes, getting Alan people to work sound and lights and even I worked sound on some nights. It was a wonderful time, a good year and I have fond memories of San Francisco, The Edinburgh Castle Pub, my friend Alan and the cast and crew of the show and being a part of the scene. I have fond memories of knowing Irvin Welsh and Trainspotting. 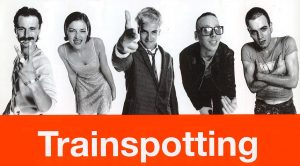 The movie came out that summer and we all went and loved it! It was vibrant, alive and electric. Danny Boyle’s visual flair was new and thrilling and the soundtrack was amazing. Who can listen to ‘Lust For Life’ by Iggy Pop and not think of Trainspotting? It went on to become a cult classic and Ewan McGregor became a huge international movie star.

Now, 20 years later, Danny and the boys are at it again. 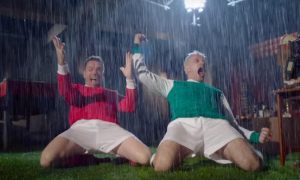 Mark Renton (Ewan McGregor) returns to Scotland from his self exile in Amsterdam. He reunites with his friends Spud (Ewan Bremmer) and Simon (Jonny Lee Miller). Spud has a son with Gail but a series of mishaps puts him on the outs with them so he’s resorted to his old friend heroin and is suicidal.  Simon inherited his aunt’s run down pub in Leith and has a young Bulgarian girlfriend, Veronika that he met in a ‘sauna’ (brothel). He’s off the heroin but on the cocaine. Begbie (Robert Carlyle) is in prison and his scared lawyer (with good reason) has failed to get him out in another appeal attempt. He escapes from prison and seeks out his old mates. 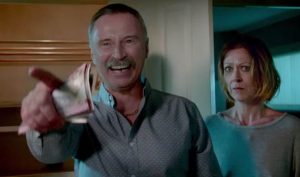 Before you know it, Mark and Simon are planning to turn the pub into a ‘sauna’ which Veronika will run and putting Spud to work doing the renovations. Meanwhile, Begbie comes calling on Simon at the pub and Simon must try to hide the fact the Mark is back in town as Begbie still hasn’t forgiven him for running off with all their money 20 years ago. Of course, Begbie and Mark are destined to run into each other and Mark must fight for his life.

The film is very nostalgic and each of the actors easily falls back into these characters effortlessly. They each carry the burdens of the choices they’ve made even as they continue to make bad ones. Even Begbie has regrets, especially concerning his now grown son, but he’s too far gone to change and he knows it.  We even get to see Kelly MacDonald’s Diane; the underage girl that Mark gets with in the first film is now a lawyer. It’s a brief scene but she’s a welcomed sight. Irvine Welsh also makes a cameo appearance as Mickey Forrester, same as he did in the first film. Newcomer Anjela Nedyalkova is beautiful and makes for a nice point in the love triangle between Mark and Simon. 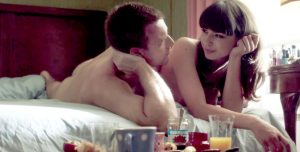 Director Danny Boyle again fills the screen with great visuals and a soundtrack of new and interesting songs mixed in with hints of the songs from the first film. He keeps the action moving and even though it’s not as thrilling or new as the first film it feels honest to the characters.

“Choose Life” was the most iconic line from Trainspotting. Mark’s speech that opened the film was a list of all the things we’re supposed to want and choose and everything that he and his mates were running away from. It’s a great speech. In T2, we get an updated version of that speech from a more world weary Mark, now off the skag but no better off than when he was and it’s tinted with sadness. The film and the characters are sad. There’s no happy ending with these guys. But they’re still alive and they’re still trying. Everyone can relate to that. But I’m admit I’m biased. The high of the first film coincided with the high I was experiencing from my life at that time. And like every addict, you’re always chasing that first high and never achieving it. So, T2 is not as good as T1 but it’s sure great to see the lads again.

Previous THE WALKING DEAD RECAP: S7EP16 THE FIRST DAY OF THE REST OF YOUR LIFE Next BETTER CALL SAUL S3EP1 MABEL