THE WALKING DEAD RECAP: S7EP15 SOMETHING THEY NEED 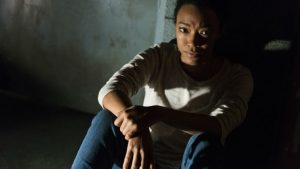 Barnacle Walkers! The cold open shows a bunch of waterlogged walkers making their way up the beach and a boat smashed up on the shore behind them. They’ll come into play later. We finally hear Tara telling Rick about Oceanside and their large cache of guns. The question is how do they get them without having to kill anyone? 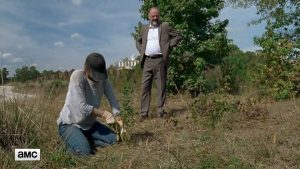 We see Maggie talking to a good looking fella with a ridiculous haircut and a man bun! Oh, I hope this is not Maggie’s next boyfriend.

Maggie goes outside the compound to dig up some plant so Gregory decides this is a good time for a heart to heart. He says they need to show a united front and he agrees to be more open minded. Maggie takes him at his word and asks him to stay with her while she finishes digging up what she needs. Gregory agrees and pulls out his knife. But he starts looking at Maggie funny. The thought crosses his mind that he could take her out right there and he’d stay in charge for good. But he can’t do it. He may be an asshole but he’s not a murderer.

Gregory trying to kill a walker was hilarious! How has he never come across one in all this time? He lets out a yelp when he sees one approaching. Maggie’s offers to do it but Gregory says he’ll handle it. He starts running toward the walker but then suddenly stops and retreats. “Ok. You do it.”, he tells Maggie. While standing by and watching Maggie handle the walker he gets blindsided by another walker. Even though he’s holding a knife he calls out for Maggie’s help. She saves him and helps him up. Gregory almost throws up as a group of people are returning from a mission. 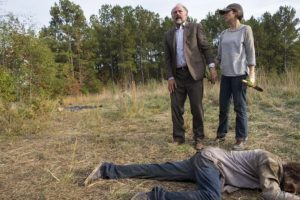 “He hasn’t killed one before. He’s learning.” Maggie tells them.
“That’s not what he told us.”

Later on, back in his office, walker blood still on his face and clothes, Gregory starts drinking tequila, his new booze of choice, he pulls out a map and the directions to The Sanctuary that Simon gave him. He calls for his assistant and tells him to pack a bag because he needs him to drive him somewhere. Weaselly bastard! 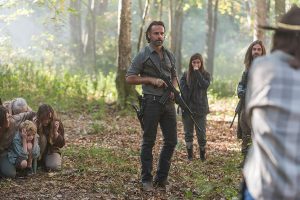 Rick devises a plan to take the guns without hurting anyone. He lets Tara go in first and try to convince their leader, Natania, to join forces. But she’s not easily swayed. Rick’s assault on the village begins with dynamite explosions meant to scare the women so they can be corralled safely. 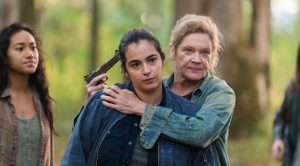 The plan works except that Tara gets overtaken by Natonia and Cindy. Natonia confronts Rick with a gun to Tara’s head. Michonne, sitting in a nearby tree in sniper mode cannot get a clean shot but she does spot those ‘barnacle walkers’ headed there way. “Rick! Walkers!” she shouts. Cindy knocks out Natonia, not wanting her to hurt Tara. The women join the Alexandrians in fighting the barnacle walkers and come out victorious without injury. Some of them seem to want to join them to fight The Saviors but Natonia is dead set against it. 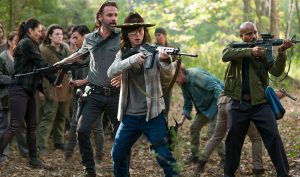 “No! We’re not fighting them with you! So take your damn guns and go!” Latoya says defiantly.

They walk off with a whole mess of guns and ammo. Father Gabriel asks Rick, “Do we need all this?” Rick flatly states, “Yes.”  Don’t go soft on me now, padre! 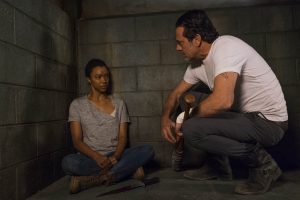 “You’ve got some beach ball size lady nuts coming in here all kamikaze like that.” Negan

Sasha was captured, of course. She gets a visit from a creepy Savior named David. He takes a liking to Sasha, talking all creepy and ripping her shirt. But before he can rape her, Negan walks in. Negan does not approve of rape. He rams a knife through David’s throat. He leaves Sasha the knife and gives her the option to 1) try to kill him, 2) kill herself or 3) kill ‘rapey Davey before he becomes ‘dead walking rapey Davey’ and she could join ‘the cause’ meaning becoming Negan just as Eugene has. 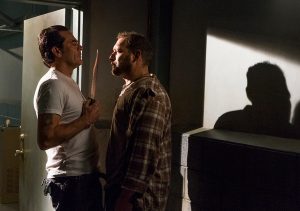 Later on, Eugene comes by to bring her a blanket and pillow and try to convince her to join Negan as he has.
“What did they do to you?” Sasha asks.
“They’re keeping me safe.” he tells her.

He tells her that he was never as frightened as he was that night in the woods and seeing Abraham and Glenn killed and by joining The Saviors he’ll never have to face that fate. I think Sasha understands but is not persuaded by his argument and tells him to go. After he leaves, old Davey starts to reanimate.

When Negan comes back, Sasha has stabbed dead Davey in the head. “You win” she tells Negan. Negan is pleased with her decision but tells her she still has some things to work on before he can fully trust her.

“Cards on the table. A little birdie told me that Rick and the rest of your people are up to no good. That has to change and you’re going to help me change it.” Negan tells Sasha. 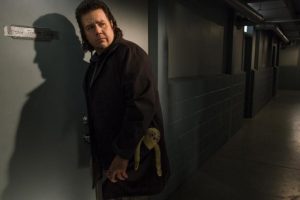 Eugene comes to check on her, hearing that she’s agreed to join them but she pleads with him, through the cell door, that she made a mistake and can’t go through with it. She begs him to bring her a knife, a gun, a razor blade so that she can kill herself rather than let Negan use her as a tool against their friends. Of course, this is a ruse. She thinks if he brings her a weapon she will have one more chance to kill Negan. But Eugene doesn’t bring her a knife or gun, but one of the poison pills he made. He gives it to her and tells her once she takes it she’ll be dead within 30 minutes. Sasha is crushed.

The episode ends with Rick and the gang returning to Alexandria where they find Rosita opening the gate for them. “There’s somebody here”, she tells them and then leads them to the jail cell Morgan built. Inside they find Dwight! Daryl has to be held back from attacking him. “He wants to help.” Rosita tells Rick.

“Is that true?” Rick asks Dwight.
“Yes”
“OK.” Rick then pulls out his gun and points it at Dwight. “Get on your knees!” 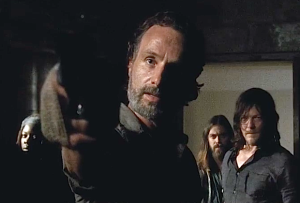 It makes sense that Dwight is flipping sides. And it’s not a bad trade – Dwight for Eugene. He has nothing to lose now that Sherry is gone. But can he and Daryl ever get along? We’ll see. 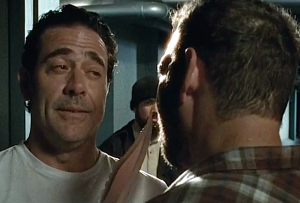 Negan, for all his brutality, is very much against his people committing rape. He has a soft spot for kids, too. Was he once a decent person? Are we going to get a Negan back story episode? Will we find out what happened to him that made him so vicious? Maybe next season? 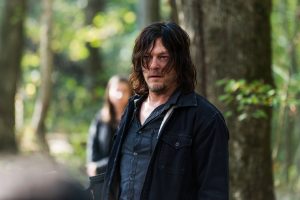 Yeah, that guy with the man bun and the modern haircut. Come on! Do they have a stylist at The Hilltop that we haven’t met yet? How is Jesus keeping his luscious head of hair looking so clean and full? And why can’t they make an appointment for Daryl? Oh, he’d be darling in a man bun! 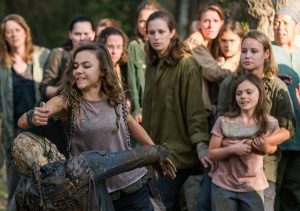 1 Gregory told Negan about Rick’s plans to fight back. He’s the ‘little birdie’. 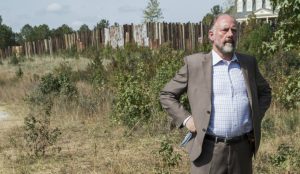 2 Sasha is going to take that pill and die before Negan arrives at the gates of Alexandria.

3 Rick is going to send Dwight back as a spy.

5 The Saviors and Alexandria will engage in battle! They will have to retreat when they See The Kingdom, led by King Ezekiel and Carol come to the rescue!

I’m hoping the season finale delivers the goods! Based on the preview, it looks like we’re finally going to see a battle!

Previous THE WALKING DEAD RECAP: S7EP14 THE OTHER SIDE Next KING KONG: SKULL ISLAND