THE WALKING DEAD RECAP: S7EP14 THE OTHER SIDE 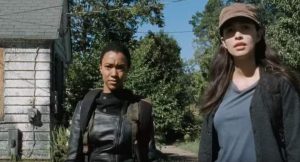 Sasha and Rosita or ‘Sashita’ take their act on the road! They are so desperate to kill Negan and avenge their lover, Abraham’s death, that they are willing to put aside their differences to get the job done. Meanwhile, Negan’s second in command, Simon, shows up at The Hilltop again to look for Daryl and take the other Dr, Carson back to The Sanctuary since Negan cremated their Dr. Carson a couple of episodes ago. This is really a quiet episode, the calm before the storm, as I expect the final two episodes of the season will be full of excitement. 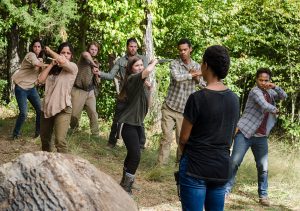 The opening backtracks in time, showing how Maggie and Sasha are training the army. We also see a very sullen Daryl, who won’t even look at Maggie as she brings him food. We see Jesus making a map of The Sanctuary for Sasha, so Sasha had already decided to go on her own to assassinate Negan. Then we see Sasha at Abraham’s grave and Rosita approaching her which brings us back to the end of last week’s episode. 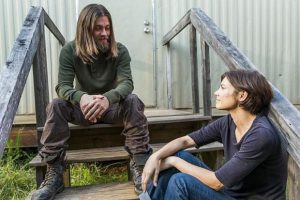 Jesus urges Sasha not to go to try and kill Negan. When he sees that she was determined to go, he then urges her to tell Maggie. Sasha tells Enid she can’t come with them and tells her to look after Maggie. Then all hell breaks loose! The Saviors are here! Enid rushes to hide Maggie and Daryl under the house. Being in close quarters, Maggie forces Daryl to look at her. He starts crying and saying he was sorry. He blames himself for getting Glenn killed (it was his fault!). Maggie assures him that she doesn’t blame him and that he is one of the good things in this world. They hug and she says, “We have to win. Help me win!” 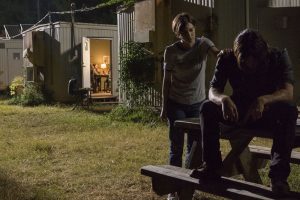 Gregory is running out of booze! That seems to be all he’s really concerned about. He’s also worried about losing control of The Hilltop to Maggie. He almost gives her up to Simon but stops short of it but Simon does give him the address of The Sanctuary and tells him to come see him if her ever feels threatened by someone at The Hilltop. The main reason The Saviors stopped by was to retrieve Dr. Carson. Negan killed the other Dr. Carson (they were brothers) so they need a new one. Even Gregory was not happy about this. Simon did leave them with a large crate filled with aspirin. Great trade! 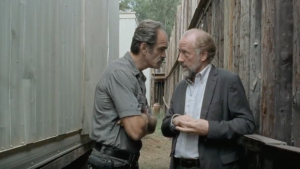 Meanwhile, Sasha and Rosita sneak out the back when The Saviors arrived and started their trek to The Sanctuary. 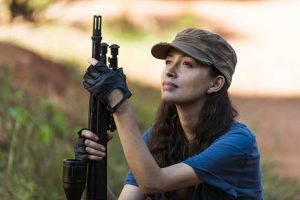 Suffice it to say, Rosita is really pissed at Sasha. They need each other but the wounds run deep. When Rosita sees that Sasha is wearing the necklace she made for Abraham Rosita sees red. They make a good team though! They attack a used car lot filled with zombies and commandeer a car running over a few as they made their escape. They disagree on how to get the job done; Sasha wants to set up in a building outside of The Sanctuary and take the shot from there, leaving them a chance for escape. Rosita wants to infiltrate and make sure they get the job done. While they wait for Negan to pop into range they open up to each other. Rosita talks about all the things she learned from previous boyfriends and that once she learned all she could she ‘bounced’. “The sex was just for fun” she tells Sasha. She felt bad that she never got to tell Abraham that she was happy that he was happy. She asks Sasha if she was happy and Sasha tells her that she was. They seemed to move past the hate and fully support each other with the task at hand. 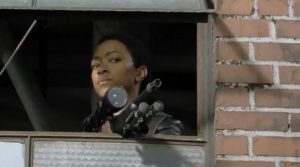 Sasha gets into place and when she looks through her sights she sees Eugene. She tells Rosita that Eugene seems to be telling people what to do. Rosita just thinks he’s working an angle. The trucks roll in carrying Simon and the new Dr. Carson.  Many Saviors come out to meet them including Mr. Big himself, Negan. I love that Negan throws his arm around Eugene’s shoulder like they were the best of pals! Too many people around Negan to take a shot so they decide they need to go in.

They wait until dark and when Eugene walks out talking to another Savior, Sasha takes out the Savior and tells Eugene they’re they to rescue him.  But Eugene doesn’t want to be rescued. He’s got it good there.  He’s a big dog and Negan loves him! He tells them to go away and he walks back into the building. Rosita is pissed but I have to agree with Eugene on this one. They were not there to rescue him.  They didn’t even know he was there. They were there to kill Negan so what was Eugene supposed to do? Tag a long? No.  He knew they were on a doomed mission and wanted no part of it.  Hell, even they know they weren’t going to make it out.   The next crazy thing was that Sasha decides to go it alone and locks Rosita out of the mission. “They need you”, she tells Rosita and then runs into the building. Seems pretty foolish to me.

Rosita begins her retreat but she seems pretty pissed that Sasha is taking her thunder, not allowing her to be a part of killing Negan. She stops and begins to cry when she looks up and sees the shadow of a man with a crossbow.  How many of you thought it was Daryl? Well you were wrong! It was Dwight!! That’s what I think anyway. Does he help Rosita or take her prisoner?  I think he takes her prisoner.  He is in no position yet to turn on Negan.

Jesus and Maggie have a heart to heart and he opens up to her about his boyfriend troubles. TWD’s first gay character? I think so. Let me know if I got that wrong.

Maggie has been pregnant for a while now, right? It seems like months yet she is not showing one single bit! The scene where she is getting a sonogram you see that she’s still sporting six pack abs!

Daryl needs a bath and a haircut! Come on! 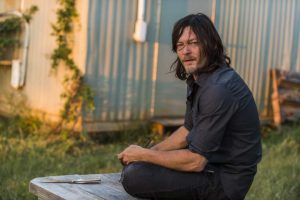 Hearing Eugene speaking over the walkie talking was hilarious! He refers to himself as Dr. Eugene Porter. He is so loving being the big shot! 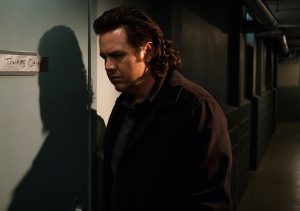 2 Eugene will stay Negan and not help Sasha

3 Looks like they stage a full out assault on Oceanside.

4 Maggie will officially dethrone Gregory in the next episode

5 The season final will have a battle but not the big battle.  Saving that for the first 8 episodes of Season 8

Previous LOGAN Next THE WALKING DEAD RECAP: S7EP15 SOMETHING THEY NEED