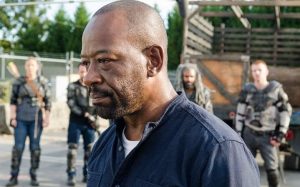 I thought it was going to be a ‘Carol’ episode but it turned out to be a ‘Morgan’ episode! There was a little Carol at the beginning and at the end. It was another strong episode that moves the story closer and closer to ‘all out war’. 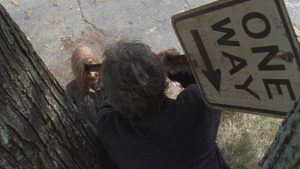 Carol can’t sleep. She’s restless. She feels something’s wrong.  She heads to The Kingdom for some answers.  She kills some walkers with a street sign while perched in a tree. Pretty nifty. She looks for and finds Morgan and asks him if everyone is ok? Morgan tells her that she honored her wishes and didn’t tell Daryl where she was. Daryl found her on his own and whatever they talked about is between them. He says if she wants to go to Alexandria right then he would take her and she can find out what she needs to know.  But Carol doesn’t want to.

Carol can’t have it both ways.  She can’t want to be left a lone but still be kept in the loop.  You’re either in or out, Carol! 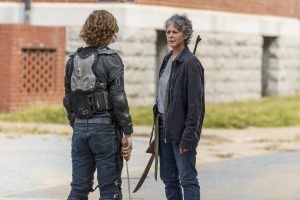 When Richard and Morgan started talking about Benjamin and how he’s too young to be a father then started discussing how they were fathers and what they lost, you know death is coming. It’s a certainty that when you start getting to know more about a character that their death is eminent.

On their way to meet with The Saviors, the Kingdom find the road blocked with shopping carts which form an arrow. They get out of the truck and move the carts and find that an open grave has been dug with a sign that says ‘Bury Me Here’. The group finds it disturbing but move on, without further discussion, to the meet. 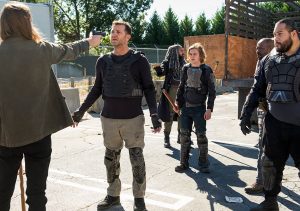 The Saviors meet with The Kingdom to get the week’s shipment: 12 cantaloupes. But when they open the back of the truck there’s only 11. An example has to be made. The Saviors tell them to give them their guns. No way that’s gonna happen! Both sides raise their guns and point at each other (very John Woo-like) but the leader of The Saviors convince Ezekiel to order his people to hand over their guns. When the hothead kid from The Saviors group points his gun at Richard, Richard straightens up to accept his fate, ‘Go ahead”. But the hothead turns his gun away from Richard and fires, hitting Benjamin in the thigh. They rush Benjamin to Carol’s because she’s closer and he’s bleeding out badly. But by the time they get him there and on a table it’s too late. He dies. This takes a toll on everyone but it hits Morgan especially hard. He refuses to go back with the others and he heads back to the area where they ran into the shopping cart barricade.

Morgan puts it together that it was Richard that made the barricade and buried the grave. He took one of the cantaloupes and hid it! Morgan has a full on breakdown, remembering his son and the time when he was just running around like a crazy person killing everything in his path.

He confronts Richard back at The Kingdom and Richard owns up to it.  He expected to be the one to be killed seeing as he has been the one causing trouble with The Saviors previously.  He feels terrible about Benjamin but he still feels that something needed to happen to get The Kingdom in the fight. He tells Morgan the story of how he lost his wife and daughter. He failed to act in time to stop that and he doesn’t want to make the same mistake again. He says that they now need to do something to prove that they will behave going forward and then they need to strike. Morgan calms down, not saying one word during the entire scene. 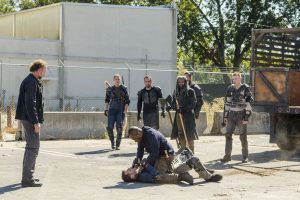 The next day they go back to meet The Saviors to hand them the 12th cantaloupe they promised. Only this time, Morgan is the trouble maker. He attacks Richard and kills him with his bare hands. H explains what Richard did, trying to start a fight with The Saviors but that now The Kingdom understands and will behave from now on. The Saviors leave and Morgan buries Richard in the grave he dug for himself and finds the backpack, Richard’s daughter’s, that he wanted buried with him. 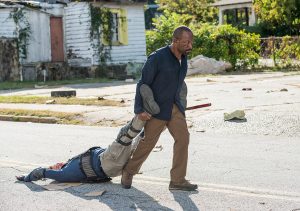 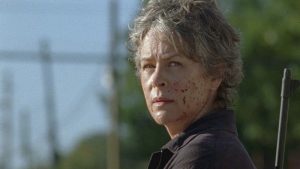 Morgan shows up at Carol’s doorstep. He finally tells her what happened at Alexandria. Negan killed Abraham and Glenn. Others have died too, Spencer, Olivia. They are all now under Negan’s thumb. He tells her he can’t go back and she says to him the same thing Ezekiel said to her, “You can go and not go.”  And with that Morgan sets up at the cottage and carol treks to The Kingdom.  She finds Ezekiel and Benjamin’s little brother planting new crops. She tells him that they need to fight.  Ezekiel concurs.

And so The Kingdom is on board.

Morgan mistakenly calls out his son’s name (Dwayne) when speaking of Benjamin.

This was a big turning point for Morgan.  He is no longer the annoying pacifist. The end of the episode left him sitting on Carol’s porch whittling a pointed edge to one side of his staff. 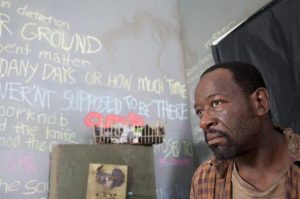 The episode was written by show runner, Scott Gimple who also wrote the excellent Morgan centric third season episode Clear. This is sort of a sequel to that episode.

Macsen Lintz, the actor who plays Benjamin’s little brother, Henry is actually the real life brother of Madison Lintz, the actress that played Sophia in Seasons 1 & 2. 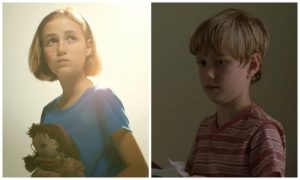 1 With Richard and Benjamin gone it leaves only King Ezekiel, Morgan and Carol as the only people we know from this group. One of these three will be killed in the big battle with The Saviors.

2 Next week Sasha and Rosita make their assault on The Sanctuary. They’ll probably just be captured. But one or both will die in the Season Finale.

3 I’m still rooting for a Negan back story episode but now thinking that won’t happen this season.  If anything, maybe we’ll see a hint of it in an extended cold open.

4 A trip to Oceanside for Episode 15?

5 Not enough time to gather all the forces for the finale. But we need to see the heads of each community meet – Rick, Ezekiel, Maggie, Jadis, Oceanside, Carol, Daryl, Morgan.