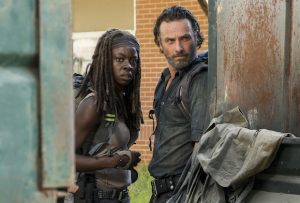 The Walking Dead is on a roll! Another very good episode! Rick and Michonne on their honeymoon! Killing zombies and scavenging by day while making sweet love at night in that creepy van! Meanwhile, back at Alexandria, Rosita continues her slow descent into stupidity and Tara turns to Judith for advice. 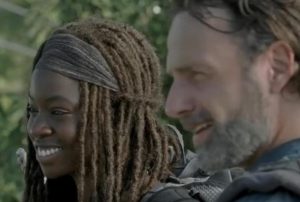 Rick and Michonne are having a grand old time driving through the countryside, camping out and laughing! Man, are they having a ball! Of course, they’re also on a mission to find guns. They hit the jackpot when they run across a school that looked like it was turned into a post apocalypse camp. They are plenty of soldier walkers with rifles strapped to their backs! There is also a carnival complete with rides set up on the grounds. They climb up on top of the roof of the school to get a better look and, you guessed it, the roof collapses and they fall into the building. I thought this was bad but these two lovebirds just laughed and laughed! “We fell through the roof!” Hysterical! Luckily they weren’t injured and better yet they stumbled into a treasure cove of army rations, water and other canned foods. So they light some candles and pig out! 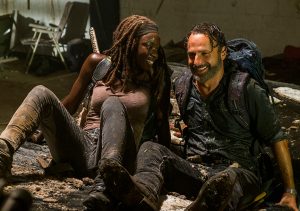 Michonne is so confident that they will overthrow Negan she starts talking about what comes after and telling Rick he should be the one to lead all the communities and shape the future world. He’s not all that interested in that but he would be willing to share the responsibility with her and they could reshape the world together. Lord, they are giddy as school kids! Later on though, we see Rick awake and looking anxious as Michonne slept.

The next day they put their plan in motion to kill all the walkers and take the weapons. Rick assigns 8 walkers for Michonne to dispatch of while he only has to clear one and then commandeer a car to block off the gap in the fence. Michonne kids Rick about having to take on 8 walkers but Rick quips back “You can handle 8!” They are way too cavalier about this. Sure enough once Rick gets to the car there is a soldier walker stuck in the windshield. He tries to pry him out but parts of the soldier keep coming off! Disgusting! Michonne comes over and helps him push the car but they end up getting stuck in the car surrounded by walkers. They’re not laughing anymore. 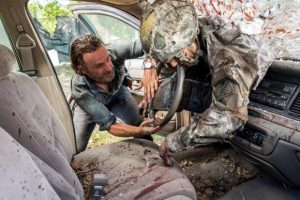 Luckily, the car has a sun roof and they climb out. They decide to stay and wipe out all the walkers instead of run. They’re a pretty confident duo. They separate and start wiping out the walkers pretty easily until Rick spots that deer that Michonne spotted earlier. He climbs up on the Ferris wheel to try and get a good shot but instead falls. Michonne freaks out! She makes her way over to him and sees a horde of walkers on the ground feasting on what she thinks is Rick. She freezes. She’s in shock. She drops her sword! At this point I am now screaming at the TV! “What are you doing? They’re eating the deer, you idiot!” Before she gets overtaken by walkers, Rick pops out of his hiding place, grabs her sword and tosses it to her. They finish off the remaining walkers and run into each other’s arms! The couple that slay together, stays together!

YOU CAN GO ON WITHOUT ME 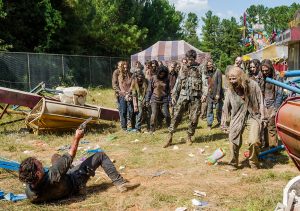 The best scene of the episode comes on the ride back to Alexandria. Rick can see that Michonne is pretty shaken up about thinking he was dead. He pulls over to talk. He tells her that he hasn’t been sleeping. He’s been thinking of the friends he lost, thinking of Glenn. “Glenn saved me at the very beginning. I wasn’t able to save him.” He tells her that in the fight ahead they’re going to lose people, lose friends and maybe each other but that they have to go on. “This isn’t about us. It’s about a future.” The honeymoon may be over but these two are stronger than ever!

JADIS AND THE TRASH YARD KNIGHTS

And with that Jadis agrees. These are some weird people. 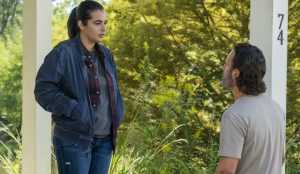 I’ve been wondering when Tara was going to spill it about Oceanside. It took a heart to heart with Judith to convince her that it was finally the right thing to do. She tells Rick and though we don’t actually see that scene, it’s clearly insinuated. Rick will have to be very careful how to approach this. Those women at Oceanside have itchy trigger fingers!

GET IT TOGETHER ROSITA!

Rosita is still being an idiot. Moping around and being an asshole to everyone. Father Gabriel tries to talk some sense into her but to no avail. Tara tried as well but nothing. Eventually Sasha high tailed it to The Hilltop to find Sasha, who was leaving fresh flowers on Abraham’s grave. Without saying the words, Sasha understood what Rosita had come for. “One thing; I get to take the shot”. Rosita agreed and then pulled out a high powered rifle with scope, recently brought back by Rick and Michonne. They understand that it’s going to be a ‘one way trip’. Idiots.

I loved the Sixteen Candles homage! 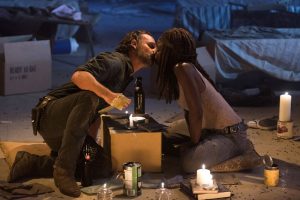 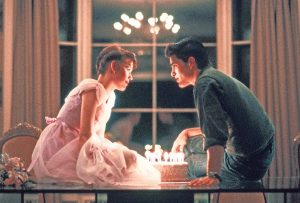 Since when is ‘Chili Mac n Cheese an aphrodisiac?

The Carnival of Zombies left a lot of open questions: Why did the soldiers still have their rifles slung? Why were some people in handcuffs? What? NO clown zombies?

1 Sasha and Rosita are dead! 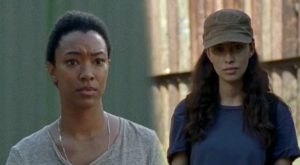 2 Dr. Smarty Pants may be faced with a hard choice: Rosita or Negan? He’s Negan.

3 Seems like they are setting us up to lose either Rick or Michonne but neither one of them is going to die.

4 Episode 15 will be a Negan back story episode! (I’m hoping)

5 The big battle will not happen this season but when it does I hope they don’t blow it! This could be epic! Scott Gimple, do not try to get too cute with this! You blew the Negan introduction! DON”T BLOW THIS!!