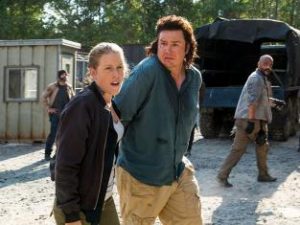 Guess who’s back? NEGAN! I know some of you really don’t like the guy and with good reason but don’t worry, the focus of the episode is on Dwight and Eugene. But that doesn’t mean we don’t get to see Negan have some sadistic fun and by that, I mean, by killing someone in a new and gruesome way. That’s just how the zombie apocalypse cookie crumbles for some. 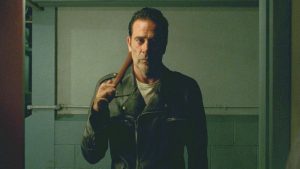 The episode backtracks to Daryl’s escape from the Sanctuary. We see poor Fat Joey’s half eaten sandwich laying on the ground and Fat Joey now Dead Joey lying nearby surrounded by a gaggle of shocked Saviors. Dwight comes running in and notices that a motorcycle is gone. He runs to Daryl’s cell and finds it empty. He knows he’s in deep shit but what can he do? He goes back to his room where he sees his chess set scattered on the floor just as Daryl left it. He waits for Negan and some Saviors to bust in and they do and proceed to wail on him for awhile. Negan tosses him in solitary until he can determine if he was the one to let Daryl escape or not. In the meantime, Negan’s favorite wife and Dwight’s ex, Sherry has also escaped. Dwight tells Negan he will find her and Negan lets him out to try. 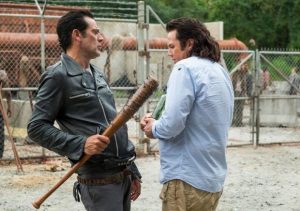 Eugene arrives at The Sanctuary and he is a shivering, hot mess! Nobody does scared like Eugene. But he is surprised when he is not led to a cell (Like Daryl) but is brought to a furnished room with a bed, kitchen, frig with food and beer and books on the shelves! Whaaat!! He’s asked what he wants to eat, he can have anything! “Lobster”, he says. Well, no they don’t have that. He settles for pasta and orange sauce. He would love some pickles and later on as he is shown workings of the place he is given a big jar of pickles! When Negan finally approaches him and asks him for help keeping his walker guards from falling apart on duty, Eugene comes up with a clever resolution. Melt some metal and pour it over the walkers – affixing them to the chain link fence and if you pour some over theirs heads they’d be safe from ‘hostiles and other calamities’. Well Negan just loved his idea! So much so that he sends some of his wives over to his bachelor pad as a treat. NO SEX! That is not allowed but “the company of a good smelling woman is enough to make you feel human again” 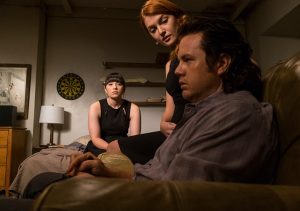 Eugene’s idea of a good time is making the ladies some microwave popcorn and letting them watch him play video games. Very suave. One of the wives was just getting drunk but the other two were just happy to be away from Negan. They wanted Eugene to show them how smart he is and he proceeds to do a couple of science tricks out in the yard which make them applaud and scream. Eventually, however, the two giddy wives were knocking on his door and asking his help with the sad wife. She wants to commit suicide and they want Eugene to make them a poison. Eugene agrees and goes to the ‘store’ to get some needed supplies where he bolts to the front of the line. When he’s scolded by the woman dispensing goods he decides to bully her by saying that he’s the new head engineer of The Sanctuary and reports directly to Negan which means he’s HER boss. The woman is frightened and Eugene re-enacts a classic moment from The Jerk (1979) and takes a bunch of goods including an ugly stuffed animal. 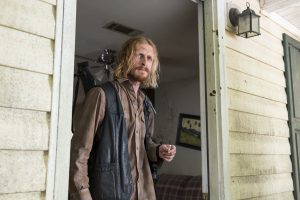 Poor Dwight returns to the home that he shared with Sherry before zombies. He finds that she’s been there and left a letter for him. It’s a heartbreaking scene as she tells him that he’s not the man she used to love and she wanted to wait for him but she wasn’t sure if this new Dwight would take her back to Negan or kill her. Ouch. He leaves a six pack of beer and a package of pretzels which is what they used to like and drives back to The Sanctuary. He tells Negan that he found her and killed her. Negan incredibly believes him! But Dwight also goes one step further; he plants a part of Sherry’s letter to implicate that Dr. Carson freed Daryl and helped Sherry escape.

THE IRON OR THE FIRE 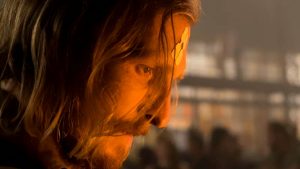 Dwight fires up the furnace and heats the iron. Eugene looks on, terrified. Dr. Carson pleads and screams his innocence but to no avail. He just needs to admit what he did and say he’s sorry. Ok. He does. Negan drops the hot iron. All’s well! Nah! Negan grabs the good doctor and tosses him head first into the flames of the furnace where he burns alive!

Thus, when the wives come for the poison pills Eugene denies them. He figures out that they really meant to give them to Negan. He does not want any part of that plan! Eugene has it pretty comfy and he has Negan’s trust. Negan tells him that he ‘doesn’t have to be scared anymore’ and that he’s ‘safe. I think this really turns Eugene. He desperately wants to be safe and to not be constantly crying. 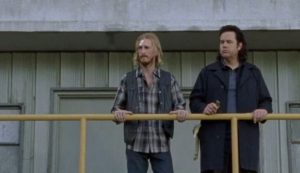 The final scene was wonderful. It wasn’t because it was shocking or violent or had some crazy twist. It was just a shot of Dwight and Eugene overlooking the zombie security wall. Eugene instructing some Saviors to be careful pouring the molten metal over the walkers, implementing his idea, the one Negan that was ‘badass’. Eugene was wearing a long black cost, his new stuffed animal resting in his pocket.

“We are Negan”, he says to Dwight. “Yeah” Dwight confirms. 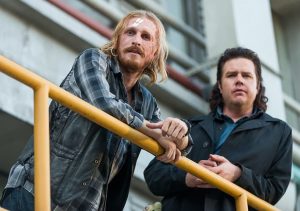 These two men went on an interesting journey in this episode and both are left different. Not the men they used to be and seemingly prepared to embrace their new transformation. For Dwight; Sherry is gone. Daryl is gone. Dr. Carson is dead. There is nothing left to remind him of who he used to be. For Eugene; Abraham is dead. The others are doomed. He feels safe and protected with Negan. He is important at The Sanctuary in a way he never felt at Alexandria. What better options do they have?
They are Negan. 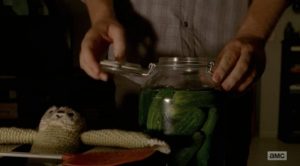 When Eugene turns on the boom box in his new room guess what comes on? Easy Street! A song that signified torture for Daryl had Eugene bobbing his head to the beat.

“I was gifted these pickles” Eugene, when Negan asks him what he wants.

The sight of that walker, impaled on the pole, disintegrate before our eyes was awesome and extremely gross!

I love Eugene’s new teddy bear! He calls it his “grimbly-gunk.”.

1 When the fighting starts I don’t think Negan can count on either Dwight or Eugene.

2 Dwight framed Dr. Carson to protect Sherry but I don’t think he meant for him to be killed. He just doesn’t care anymore.

3 Eugene is going to have to keep coming up with new and inventive ways to be useful which means making bullets for The Saviors instead of Rick. What a betrayal!

4 Dwight may be sent out to look for Daryl. Could they meet again at The Hilltop?

5 I don’t see the all out war happening this season. We’ll have to wait until next season to see Negan get his!