THE WALKING DEAD RECAP S7EP9 ROCK IN THE ROAD

The mid season premiere was certainly much lighter than the first half of the season but filled with several interesting twist and turns, a gnarly, new, inventive way to kill zombies and Rick smiling! Smiling! Haven’t seen that in a long while!

Father Gabriel stands watch at Alexandria. He decides this is a good time to crack open his Bible. Whaat! There’s a crazy dude in funny boots out there! He climbs down and walks into the pantry area. Cue loud noise. Then we see him packing all the food and knives, filling the trunk of a car and driving off! Something doesn’t seem right. Most people missed it but as he slowly drove off, somebody sat up in the passenger seat. I think it was the boots dude and he’s forcing the padre to do this. I don’t think he’d return to his cowardly ways. 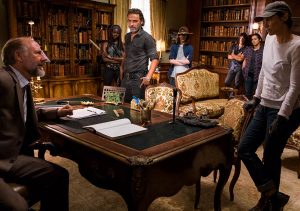 Rick and the Grimes Gang try to convince Gregory to commit to the fight against Negan and The Saviors but Gregory won’t have any of it. He calls Maggie ‘Margaret and Rick ‘Ricky’ and tells them it’s their problem. But he doesn’t yet realize that he’s no longer in charge. The people look up to Maggie for saving them from that ‘zombie bomb’ that The Saviors threw into their community a few episodes back and are ready to follow her into battle. But they still need more fighters and weapons. Jesus decides to take them to meet King Ezekiel.

“Just because we slept with the same guy doesn’t make us friends.” Rosita to Sasha 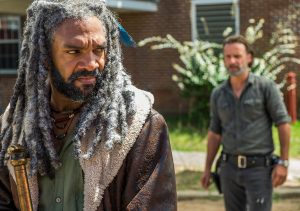 Rick and the Gang are amazed at how big The Kingdom is and how much food they’re growing. Jesus brings them into the auditorium for their meeting with King Ezekiel and were not prepared to see that tiger! Welcome back, Jerry! Rick makes his pitch and Richard is vocal about supporting going to war with The Saviors. But King Ezekiel turns to Morgan for advice and Morgan, of course, warns of many deaths. But he did have something interesting to add: “Why not just capture Negan?” Of course, that would not be an easy feat to pull off but we already know that he is not supported by ALL of his followers and they may find allies in his ranks. 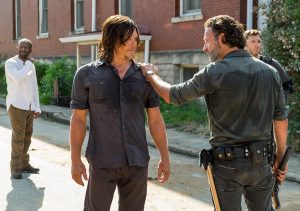 They stay the night but in the morning King Ezekiel tells them he will not join the fight (yet) but he will keep Daryl safe because The Saviors never enter their compound per their agreement. That may soon change though. Daryl isn’t happy about this but maybe he can try to change the King’s mind. Morgan did not tell them that he knew where carol was, keeping his word to her. But with Daryl staying at The Kingdom, odds are that they will be reunited soon enough.

THE ROAD TO ALEXANDRIA

“Without Fat Joey…Skinny Joey is just Joey….Let’s have a moment’s silence.” Negan’s voice on the radio 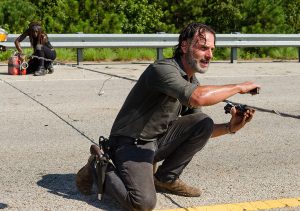 Thanks to Jesus grabbing one of The Saviors radios they can know when they plan to visit Alexandria. But on the way back they hit a traffic jam on the highway and a dynamite booby trapped clothesline stretching across the highway. They need the dynamite and explosives and luckily Rosita knows about this stuff and defuses the trigger. As they hurry to take the dynamite of the wire a herd of walkers approaches. Jesus and Sasha head back to The Hilltop on foot. Rick and Michonne hot wire the cars that the clothesline is attached to and they drive towards the herd and mow down a hundred of them in a fantastic ‘Oh My God!’ sequence! They hop in the van with the others and high tail it back to Alexandria.

They get back just in time to greet Simon and his motley crew who are out looking for the escaped Daryl. The Saviors ransack the place. It is only then that Rick discovers that all their food is gone! Once The Saviors leave Aaron tells Rick that it was father Gabriel that took off with the food. Everyone is quick to call the padre out as a traitor but Rick refuses to believe it. Father Gabriel has earned Rick’s trust, especially looking after Judith as he has. When Rick finds Father Gabriel’s bible he finds that he has written ‘BOAT’ on one of the pages. How did he know about Aaron and Rick’s boat adventure? Rick, Michonne, Rosita, Tara and Aaron head back to the place they found all those supplies on that barge. But they don’t get very far before they are surrounded by about one hundred armed people. The episode closes on a wide smiling Rick holding his hands up. He seems pretty happy about being captured!!

1 Rick is smiling because he just stumbled on an armed army he can slap ‘red shirts’ on to fight Negan! 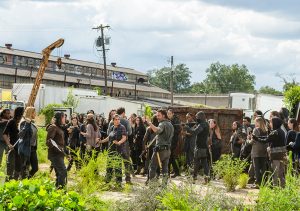 2 Daryl will tell Carol about Abraham and Glenn and Olivia and what happened to him and convince her to become the ‘Clint Eastwood’ of the zombie apocalypse again.

3 It will take Carol to convince King Ezekiel to join Rick and fight Negan.

4 They still need the Oceanside women and their cache of weapons. Spill it, Tara!

5 If 24:Legacy doesn’t pick up in the ratings, Heath may show up again before the end of the season! 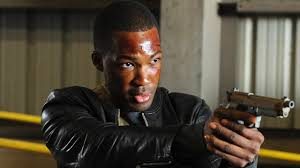 WHO WILL BE NEXT TO DIE?

Hard to tell with this show but my money is on Sasha or Aaron.